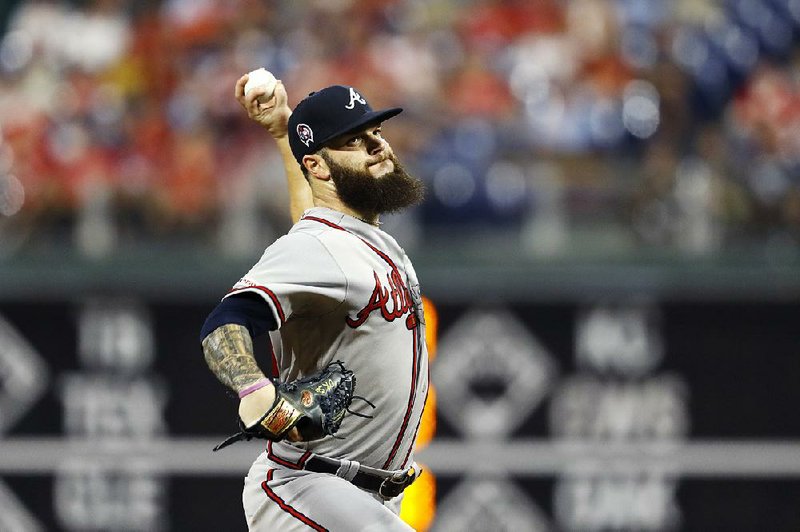 PHILADELPHIA -- Former Arkansas Razorback Dallas Keuchel made the Philadelphia Phillies look foolish for not calling him when he was available.

The Braves reduced their magic number to eight. They have a 9½-game lead over Washington with 15 left.

The Phillies entered two games behind Chicago for the second NL wild-card spot.

Keuchel (8-5) gave up one run and three hits to win his fifth consecutive start.

Despite a suspect rotation, the Phillies didn't pursue Keuchel in free agency while he sat for several months. The 2015 American League Cy Young Award winner eventually signed a one-year, $13 million deal with Atlanta in June.

"I think a lot of those guys over there in the front office are second-guessing themselves and I would, too," Keuchel said.

Keuchel allowed one run on three hits across his six innings, lowering his ERA to 3.35. He struck out eight, looking particularly effective with a three-pitch mix of his two-seamer, change-up and slider.

"His slider was really nice today, he had a good feel for his change-up," Flowers said. "Pretty standard Dallas. No panic in him. Just trying to execute pitches, trust in his defense. Good stuff."

It was nights like Wednesday that show Keuchel's value beyond performance. Every time he works his way out of a jam, it's a learning lesson for Mike Soroka, Max Fried and other young Braves, according to Manager Brian Snitker.

"It's been valuable ever since he got here," Snitker said. "Every time I look down the bench it's him and Soroka or him and Max Fried. Talking to him when we got him, looking at what we had, we knew he'd be good for them. And he has been. The preparation, the work ethic, the competitiveness. It's all really good things for those young guys to witness and be a part of."

Chris Martin struck out the side on nine pitches in the seventh. Shane Greene worked the eighth and Mark Melancon finished for his 10th save in 10 tries with Atlanta.

"He had a difficult time putting hitters away," Manager Gabe Kapler said. "He didn't get one pitch up enough and Flowers punished it."

Donaldson reached on shortstop Jean Segura's throwing error with one out in the fourth and Matt Joyce followed with a single. After pinch-hitter Rafael Ortega struck out, Flowers drove a 2-2 fastball into the left-field seats to give the Braves a 3-0 lead.

Bryce Harper and Rhys Hoskins hit consecutive singles to start the bottom half of the inning. Harper scored on Scott Kingery's fielder's choice grounder to cut it to 3-1.

The Phillies had the bases loaded with one out in the fifth, but Harper grounded into a double play.

"I have to get the job done there," Harper said.

As rain began pouring down in the sixth, Keuchel fanned Hoskins and Scott Kingery. He generated a harmless grounder for Corey Dickerson to end his night.

Harper saved a run in the ninth when he made a perfect, no-hop throw to the plate to retire Austin Riley trying to score from second on a single by Ozzie Albies. He has 12 outfield assists, one shy of his career-best.

So Keuchel, who wasn't in the Braves' initial plans, continues to be worth every dime of the $13 million they are paying him. Following the game, a Phillies reporter asked Keuchel if he had extra motivation facing the Phillies, who were also in need of pitching help but opted not to pursue the veteran despite their deep pockets.

"If you don't come calling, what is there for me to be mad about?" Keuchel said.

On the injury front, Braves' left-fielder Johan Camargo left the game after fouling a ball off his right leg below the knee in the fourth inning. Snitker said he's day-to-day with a contusion.

Right-fielder Nick Markakis took live batting practice and threw from the outfield. He'll do it again today. He could return this weekend against the Nationals.

For the Phillies, left-fielder Corey Dickerson left the game with left foot soreness after grounding out in the sixth. X-rays were negative.

Edubray Ramos threw 15 pitches in a live batting practice session Wednesday, but it's still uncertain when he could return to the bullpen.

NATIONALS 6, TWINS 2 Ryan Zimmerman homered and drove in three runs in support of Stephen Strasburg, who gave Washington six strong innings to beat host Minnesota. Zimmerman, the all-time Nationals leader in almost every offensive category, added a few more to the pile with his second three-hit game of the season.