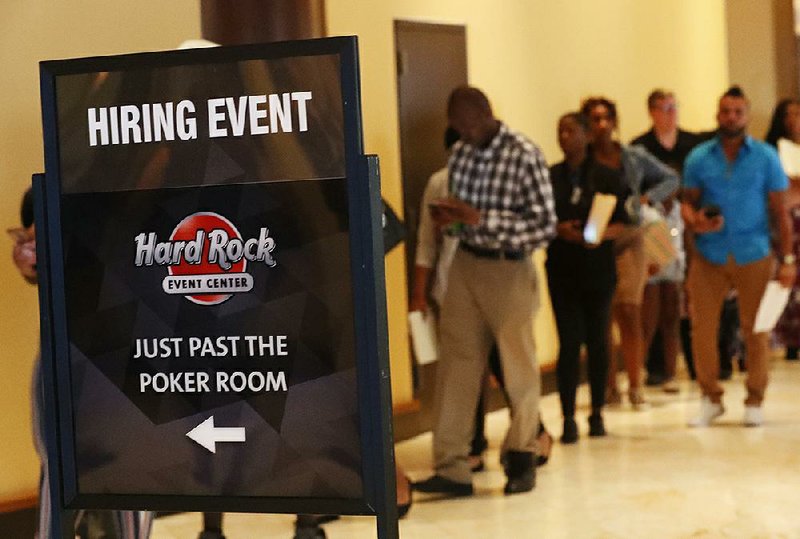 Applicants attend a job fair in June in Hollywood, Fla. U.S. job openings declined in July, but there are 1.2 job openings for every unemployed person, according to reports.

WASHINGTON -- The number of open U.S. jobs slipped 0.4% in July, while hiring climbed slightly, a sign that some employers may be growing cautious as economic uncertainty rises.

The Labor Department said Tuesday that employers advertised 7.22 million available jobs in July, down from a revised 7.25 million in June. Job openings reached a peak of 7.6 million in November but have fallen by about 400,000 since then. This is the second-consecutive month in which job openings have declined.

Still, total hiring edged up to 6 million. The number of people quitting, which tends to increase when people are confident in the prospect of finding new jobs, rose to 3.6 million.

The figures point to a largely healthy jobs outlook, said Daniel Silver, an economist at JPMorgan Chase Bank, in a note to clients.

"Like many other recent labor market indicators, the [Job Openings and Labor Turnover Survey] report signals that job market conditions are reasonably healthy, but that they are not as upbeat as they were at some earlier stages of the expansion," Silver said.

After U.S. employers added 130,000 jobs in August, some economists view the declining job openings as a sign of weakness for the labor market.

"Last week's jobs report sparked a debate over whether the slowdown in hiring is due to an economy hitting full employment, but today's [jobs survey] report indicates that this is actually a labor market that is losing momentum," said Nick Bunker, an economist at jobs site Indeed.

There are 1.2 job openings for every unemployed person, suggesting that many businesses still remain hungry for workers. Additional hiring could be especially significant in fueling consumer spending, which is the primary driver of economic growth.

Job openings fell in the Northeast and South, while rising in the West, to a record, and Midwest.

Although it lags a month behind other Labor Department data, the job-openings report adds context to monthly employment figures by measuring dynamics such as resignations, help-wanted ads and hiring.

Federal Reserve officials, who are expected to make a second-straight interest-rate cut at their meeting next week, have said consistently that the labor market remains strong.

Information for this article was contributed by Bani Sapra of The Associated Press and by Jeff Kearns of Bloomberg News.