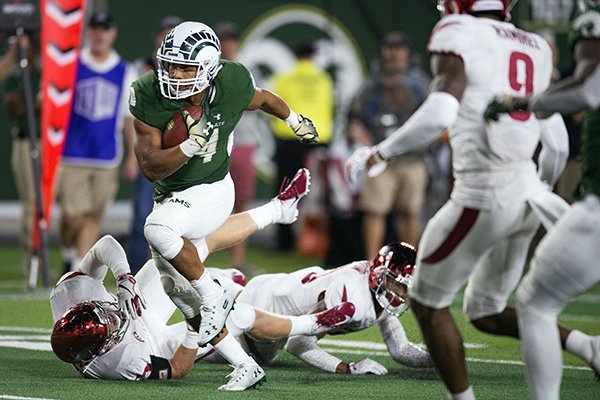 FAYETTEVILLE -- The highlight of Colorado State's 2018 football season was a 34-27 victory over the University of Arkansas, but Rams Coach Mike Bobo said Monday he hasn't watched a replay of the game.

Bobo said he will watch plays to review formations and tendencies with the Rams (1-1) playing Arkansas (1-1) on Saturday in Reynolds Razorback Stadium.

"There'll be some things that we show," Bobo said. "Things that hurt us that we've got to correct.

"I know we won that game, but I don't really watch much from last year. I get sick to my stomach when I watch last year."

The Rams finished 3-9, the first time in Bobo's first four seasons they failed to play in a bowl game.

Bobo, a former Georgia quarterback and assistant coach, was so disappointed that he declined to accept an automatic $100,000 raise that was written into his contract for his fifth season. His contract remained at $1.8 million annually.

"I didn't think we lived up to the standard of the football team that I want here at Colorado State," Bobo said. "Sometimes it's easy as a leader to point fingers and say, 'We've got to do this better, do that better. We've got to coach better, we've got to play better.' "

Arkansas Coach Chad Morris said the Rams are much improved over last season.

"I hope so," Bobo said with a chuckle when told of Morris' comment. "One, we're older. We've got an older quarterback [Collin Hill] that's been in this system for a long time. He's not a veteran in terms of starting games, but when you've got a quarterback that understands what you're trying to do, I think that helps everything go.

"I think we've got more depth on defense than we had last year. And I think the guys are playing hard. We obviously played hard that night against Arkansas and things went our way, and we had a really, really good fourth quarter against them."

"You never know what's going to happen this week, whether we win or lose or whatever," Bobo said. "But I do think we're ahead of where we were last year at this time."

Hill, who last season was coming off a second major knee surgery, played a handful of snaps against Arkansas, while K.J. Carta-Samuels -- a senior graduate transfer from Washington -- passed for 389 yards.

Hill started the final four games last season and passed for 1,099 yards and 5 touchdowns with 6 interceptions.

"I think he's grown into that position of being a leader," Bobo said. "I think he feels more comfortable now because he truly is the starting quarterback. He's doing a good job of taking ownership of the team.

"The last time he was truly the starting quarterback, he was a true freshman. And sometimes you're just trying to figure out which way the strength of the formation is, and where do I go with it?

"Now he's a fourth-year junior, and he's the No. 1 guy. I think the guys respect him because of what he's been through -- two ACL surgeries -- and how hard he's worked and the type of person he is."

"He's got the ability to see downfield. He can go through his progressions. He's going to make all the throws," Bobo said. "He's got mobility. He's not the fleetest of foot, but he does do a good job in the pocket moving around and checking the ball down and scrambling when need be."

"He's a guy that has injected some explosive plays into our offense from the receiver position, from being a speed-sweep guy," Bobo said. "He's not a big guy, but he's been very productive for us."

Colorado State broke a six-game losing streak dating back to last season with its victory over Western Illinois, a Football Championship Subdivision team.

"Sometimes you forget what it's like to win a ballgame. We enjoyed the win, we celebrated that win, and now we're going to get on to Arkansas.

"That's just one win in a season, and I think we've got a lot to do as football team. We've got a big task in front of us playing Arkansas on the road."