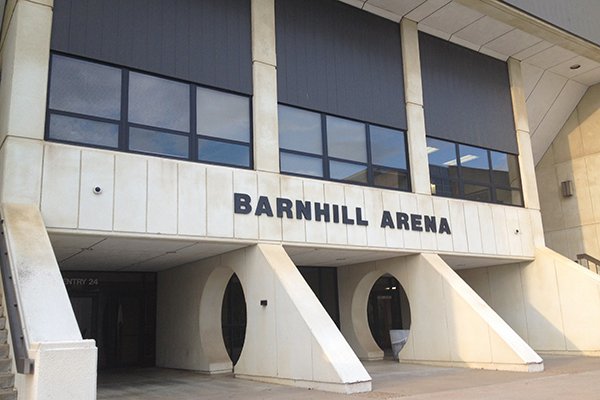 The south entrance of Barnhill Arena is shown on Thursday, Oct. 9, 2014, in Fayetteville. - Photo by Matt Jones

The scrimmage will begin at 3 p.m. on Saturday, Oct. 5, and will be the first opportunity for the public to see the team under new coach Eric Musselman. Admission will be free and seating will be granted on a first-come, first-serve basis.

It will be the first basketball event held inside Barnhill Arena since the fall of 1993 when the Razorbacks played a Red-White game in the facility. Arkansas opened Bud Walton Arena that same fall, the beginning of its NCAA championship season.

The Razorbacks played their final regular season game at Barnhill Arena on March 3, 1993 - an 88-75 victory over LSU.

Barnhill Arena was the basketball program's home for 36 seasons. Opened as Arkansas Fieldhouse in 1957, the arena was renamed after former football coach and athletics director John Barnhill in 1973 and underwent a series of renovations in the 1970s that expanded its seating capacity to 9,000.

Arkansas had a 301-95 record at Barnhill Arena with its most notable success coming under former coaches Eddie Sutton and Nolan Richardson. Sutton had a 120-8 record in 11 seasons at the arena, while Richardson's teams were 78-15 in seven seasons before the move to Walton Arena, which was built twice as big as Barnhill because of high ticket demand.

Barnhill Arena was repurposed as a volleyball and gymnastics venue following the construction of Walton Arena. Its seating capacity today is 8,500.

The future of the arena has been in doubt since 2011 when a 30-year master facilities plan for athletics recommended its demolition and the construction of a new multi-purpose arena elsewhere on campus. No formal plans for such a change are in place.