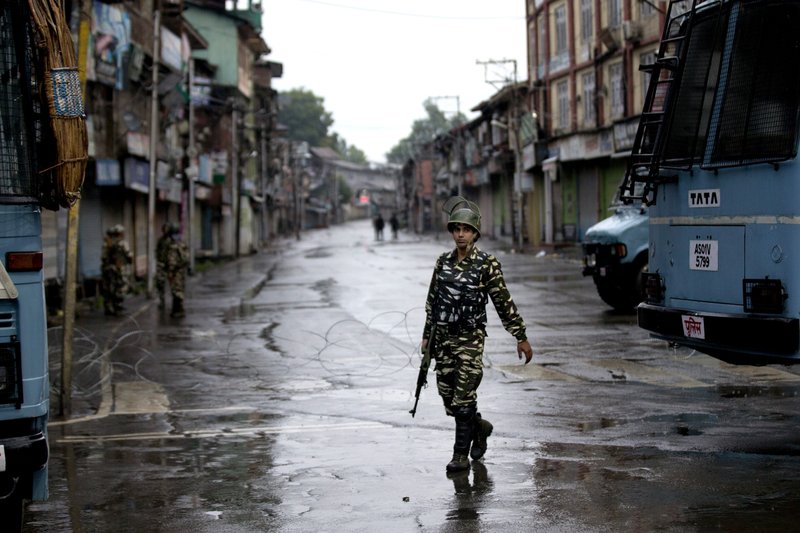 At a session of the United Nations-backed Human Rights Council, Pakistani Foreign Minister Shah Mahmood Qureshi accused India of turning Kashmir "into the largest prison on this planet." He said some Kashmiris were tortured and raped in the region claimed by both Pakistan and India.

"I shudder to mention the word 'genocide' here, but I must," Qureshi said.

Tensions between Pakistan and its southeastern neighbor have been heightened since Aug. 5, when India's government changed the status of Indian-administered Kashmir.

The Indian government imposed a security lockdown and communications blackout that has since been partially lifted in most of Jammu and Kashmir, which India's Parliament voted last month to downgrade from a state into two federally administered territories.

India's envoy, Foreign Affairs Vice Minister Vijay Thakur Singh, later lashed out against "one delegation" at the Human Rights Council for giving "a running commentary with offensive rhetoric, of false allegations and concocted charges against my country."

Kashmir is divided between India and Pakistan, and both claim rights to all of it. The nuclear-armed rivals have fought two wars over the region's control.

BAGHDAD -- The U.S.-led coalition said American warplanes have dropped 40 tons of bombs on an Iraqi island in the Tigris River that's "infested" with members of the Islamic State militant group.

The coalition said F-15 and F-35 warplanes took part in the bombing on Qanus Island in the central province of Salaheddine, north of the capital, Baghdad.

Tuesday's attack was part of operations carried out by Iraqi forces and the U.S.-led coalition against the Islamic State, which was largely defeated in Iraq in 2017.

Islamic State sleeper cells have since carried out deadly bombings in Iraq.

The militant group once controlled large swathes of Syria and Iraq, where they declared a caliphate in 2014.

The images from Planet Labs, obtained by The Associated Press, show the Adrian Darya-1 still near the port city of Tartus. The images taken Sunday show a smaller vessel nearby.

The Adrian Darya-1, formerly known as the Grace-1, was carrying 2.1 million barrels of Iranian crude oil.

Britain said Tuesday that it's clear the tanker delivered its cargo to Syria in violation of international sanctions.

The British Foreign Office said Iran's ambassador to the U.K. has been summoned for a conversation with Foreign Secretary Dominic Raab.

Raab said in a statement that Iran had broken a promise that oil aboard the Adrian Darya-1 would not go to Syria.

"This sale of oil to [Syrian President Bashar] Assad's brutal regime is part of a pattern of behavior by the government of Iran designed to disrupt regional security," he said. "This includes illegally supplying weapons to Houthi insurgents in Yemen, support for Hezbollah terrorists and most recently its attempts to hijack commercial ships passing through the Gulf."

Gibraltar earlier seized and held the tanker for weeks on suspicion the vessel was breaking European Union sanctions on Syria. The British territory later released the vessel after authorities there said Iran promised the oil wouldn't go to Syria.

DUBAI, United Arab Emirates -- An Iranian woman detained for dressing as a man to sneak into a soccer stadium to watch a match has died after setting herself on fire upon learning she could have spent six months in prison, news outlets reported Tuesday.

The death of 29-year-old Sahar Khodayari shocked Iranian officials and the public, with the incident trending across social media in the Islamic Republic.

Khodayari died Monday at a Tehran hospital after suffering burns on 90% of her body. She had been on a respirator since dousing herself with gasoline in front of Tehran's Ershad Courthouse on Sept. 2, according to the Iranian news website Rokna, which publishes in Iran with government permission.

She had just learned she could be tried by a Revolutionary Court in Iran and be put in prison for six months, her father told the website.

Iran bans women from entering stadiums for men's games, a measure that's been in place since the country's 1979 Islamic Revolution.

In March, Khodayari tried to sneak into Tehran's Azadi Stadium to watch her favorite team. As she had done for other matches, she disguised herself as a man by wearing a blue wig and a long overcoat. However, police arrested her after an altercation and detained her.

She spent three nights in jail before being released pending the court case.