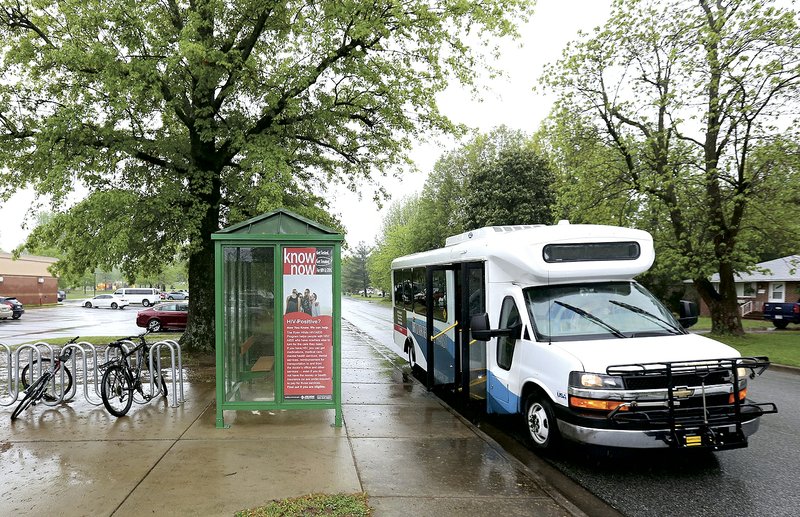 File Photo/NWA Democrat-Gazette/DAVID GOTTSCHALK An Ozark Regional Transit bus pulls away April 2 from the stop at the Springdale Public Library. Transit officials met with Benton County's Finance Committee to seek more money to pay for a salary increase for it's employees.

Joel Gardner, executive director, said he would like to pay hourly employees more. For example, a driver for the transit system starts at $10.50 an hour, according to data he gave to the committee.

Other starting wages are $14 an hour for a mechanic, $10.50 to $11.25 an hour for administrative depending on the position and $13 for a dispatcher, according to Gardner’s information.

The goal is to pay $1 a more an hour starting Jan. 1, and to add $1 an hour the next two years after that, he said. The average number of hourly employees at Ozark Regional Transit for this year is 55 people, according to Gardner’s presentation.

Gardner said he didn’t expect the Finance Committee to make a decision on money Tuesday night, but he wanted to get the information to the committee so it could take an informed look at what the transit system wants to do as far as funding. The county is set to start its 2020 budget process soon.

Ozark Regional Transit gets money from Benton-ville, Fayetteville, Rogers and Springdale, and Benton and Washington counties. Gardner has met with the other entities, and Benton County was his last stop to discuss the plan.

The county has budgeted $24,000 for Ozark Regional Transit since 2015, according to comptroller Brenda Guenther. The county has contributed $15,000, and officials budgeted to match an additional $9,000, she said. The actual numbers have been less than budgeted in some years including $20,000 in 2019, according to Guenther.

Gardner would like to see the county increase its budget for Ozark Regional Transit from $20,000 to $32,500, he said.

Ozark Regional Transit offers one fixed route in Bentonville, two in Rogers and four each in Fayetteville and Springdale, Gardner said. People who live in the county can call Ozark Regional Transit to set up a time to be picked up or dropped off, he said. Most riders in the rural areas use the service for medical appointments, he said.

Mike Jones can be reached by email at [email protected] .