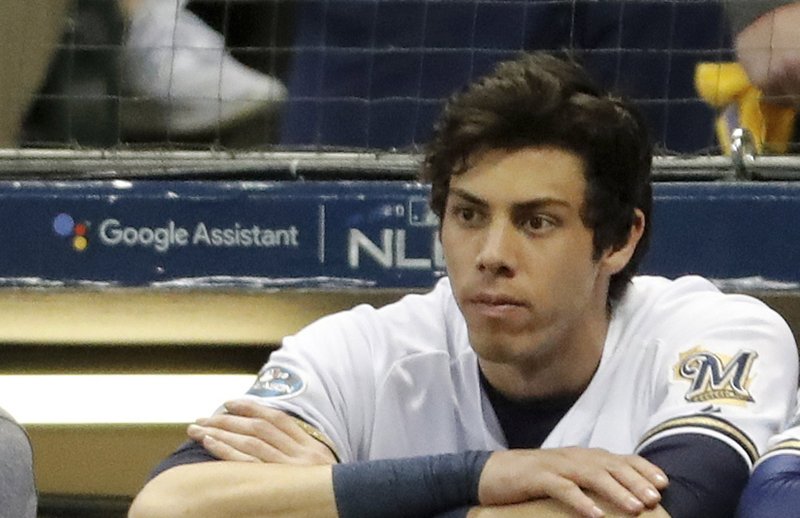 Milwaukee Brewers star Christian Yelich broke his kneecap on a foul ball and will miss the rest of the season. The National League MVP fouled a ball off his right leg Tuesday night in the first inning against Miami. He was on the ground for several minutes before limping off the field. The Brewers began the day two games behind the Chicago Cubs for the second NL wild-card spot. Yelich hit .329 with 44 home runs and 97 RBI along with 30 stolen bases this season. The outfielder was leading the majors in slugging percentage and OPS when he was hurt. Trent Grisham continued Yelich's at-bat with a 1-2 count and struck out. The strikeout was charged to Yelich.

Season over after fight

The Pittsburgh Pirates said right-hander Kyle Crick required season-ending surgery on the index finger of his pitching hand after he was injured in a clubhouse fight with fellow reliever Felipe Vazquez. Both players were fined an undisclosed amount by the Pirates for violating their contracts. The altercation occurred before Monday's game against the Giants. Crick had surgery Tuesday to repair the extensor tendon. The club expects him to be ready for spring training. The team did not provide further details about what happened. Crick went 3-7 with a 4.96 ERA over 52 appearances and 49 innings this season.

Buxton out for year

The Minnesota Twins placed center fielder Byron Buxton and his ailing left shoulder on the 60-day injured list, ending his season and leaving the American League Central leaders without their best defensive player for the rest of the pennant race. The Twins made the move Tuesday before a three-game series against Washington. Buxton suffered a partial dislocation after crashing into the outfield wall while making a catch Aug. 1. He batted .262 with 30 doubles, 4 triples, 10 home runs, 46 RBI and 48 runs in 271 at-bats. Buxton played in five games last week as a defensive replacement and pinch runner. 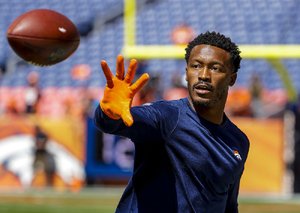 Photo by AP file photo
In this Sept. 9, 2018 photo Denver Broncos wide receiver Demaryius Thomas (88) catches a pass before an NFL football game against the Seattle Seahawks in Denver.

The New York Jets acquired wide receiver Demaryius Thomas from the New England Patriots on Tuesday for a 2021 sixth-round draft pick. Thomas gives the Jets' receiving group a boost. He and Coach Adam Gase were together in Denver from 2010-14, when Gase was the wide receivers coach and later the Broncos' offensive coordinator. ESPN first reported the deal -- the first trade between the teams since Bill Belichick took over as the Patriots' coach in 2000. The last trade between the teams was actually when Belichick left the Jets for the Patriots, and New York got a first-round pick. The 31-year-old Thomas has 688 receptions for 9,330 yards and 62 touchdowns. He played for the Denver Broncos from 2010 until being traded to Houston in October for a seventh-round draft pick. He tore his Achilles late last season, was released by the Houston Texans in February and signed with the Patriots in April.

Seven-time Formula One world champion Michael Schumacher has been admitted under great secrecy to a Paris hospital to be treated Tuesday with a cutting-edge stem-cell therapy, according to a French newspaper. The Paris hospitals authority, citing France's strict medical privacy rules, said it could not comment on the report in Le Parisien that Schumacher was admitted under tight guard Monday to the Georges-Pompidou hospital for transfusions of stem cells scheduled. The newspaper said the 50-year-old was expected to be discharged today, and that the transfusions help reduce inflammation. His longtime manager Sabine Kehm did not respond to emailed requests for comment. The winner of a record 91 F1 victories during his career suffered a near-fatal brain injury in a 2013 skiing accident in the French Alps. Schumacher's condition stabilized after he was placed in a drug-induced coma, from which he later emerged. Since September 2014, he has been cared for at home on the shores of Lake Geneva.

Jordan Morris scored his first international goal in more than two years in the 79th minute, giving the United States a 1-1 tie against Uruguay in an exhibition game Tuesday night in St. Louis. Brian Rodriguez, a 19-year-old Los Angeles FC forward who made his international debut in Friday's 2-1 win at Costa Rica, put fifth-ranked Uruguay ahead off a counterattack in the 50th minute. Rodriguez took a pass from Federico Valverde, dribbled around defender Aaron Long and beat goalkeeper Brad Guzan to the near post with a left-footed shot for his first international goal. Morris scored after Jose Gimenez's attempted clearance near the end line bounced off American defender Nick Lima and bounded in front of the open goal. Morris chested the ball in for his sixth international goal, and his first since the 2017 CONCACAF Gold Cup final against Jamaica.

Longtime sportscaster and announcer Fred McLeod has died at 67. McLeod did TV play-by play coverage of the Detroit Pistons and Cleveland Cavaliers. The Cavs said McLeod died suddenly Monday night but did not elaborate. They called him a "great friend and teammate" and a "heartfelt ambassador." LeBron James, who helped end Cleveland's title drought, said on Twitter: "May you rest in Paradise my friend!" A Cleveland-area native, McLeod called the Cavs' 2016 NBA championship, the first title won by one of the city's three major sports franchises since 1964. McLeod spent 22 seasons announcing Pistons games before joining the Cavs in 2006. He recently celebrated his 36th season in broadcasting. McLeod also served as a TV announcer for the Indians and Tigers.

Charlotte Hornets owner and six-time NBA champion Michael Jordan is pledging $1 million to organizations assisting with Hurricane Dorian relief efforts in the Bahamas. Jordan said in a statement Tuesday on Twitter through his spokesman Estee Portnoy that he's "devastated" at the destruction in the Bahamas, adding "my heart goes out to everyone who is suffering and to those who have lost loved ones." Jordan, who owns property and frequently visits the Bahamas, said as the recovery and relief efforts continue, he will be tracking the situation closely and working to identify nonprofit agencies where the money will have the most impact. Jordan added that "the Bahamian people are strong and resilient, and I hope that my donation will be of help as they work to recover from this catastrophic storm."

A former Adidas consultant who became a key government witness in a college basketball corruption case was sentenced to one year of probation. Thomas "T.J." Gassnola received the term Tuesday in federal court in Manhattan after apologizing for his crimes. Gassnola had pleaded guilty in a scheme to funnel secret payments to the families of top recruits and agreed to testify against a former Adidas executive and two other defendants at a 2018 trial. All three were convicted on fraud charges. He told jurors he was among a crew of fixers conducting what he described as "black ops" to try to get prized prospects to sign with Adidas-sponsored basketball programs. As part of probation, the 47-year-old Gassnola will have to serve two months of home detention.

Print Headline: Off The Wire