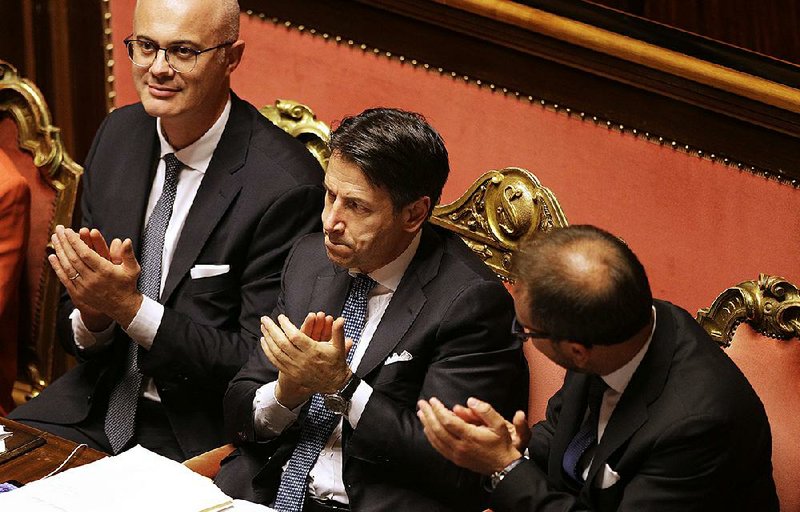 ROME -- Italian Prime Minister Giuseppe Conte won a crucial vote of confidence in the Senate for his new coalition government Tuesday, paving the way for pledged overhauls of the country's economy and sectors such as research and education.

Lawmakers voted 169-133 in favor of Conte's alliance of the 5-Star Movement and the Democratic Party, along with a smaller left-wing group -- a coalition that commands a slim majority in the upper house of Parliament.

Although it held firm Tuesday, the unlikely alliance is likely to be tested when the two bigger parties, which were at political odds until recently, try to find consensus on contentious issues such as large-scale infrastructure projects and spending.

"We must do everything we can to carry out the reforms that are important for the country, in the perspective of a new European legislature," Conte said after the daylong debate that preceded the vote. "I am confident that the opposition will give its contribution because what we build in this legislature will benefit all Italians."

On the government's chief objectives for growth, Conte singled out education, research, support for agriculture, and small and medium industries -- the backbone of the Italian economy -- as well as a shift toward a more ecologically sustainable economy.

As was the case in the lower house, the ambitious agenda of the former opponents in the coalition prompted a heated debate in the Senate, and opposition lawmakers repeatedly interrupted the prime minister with jeers and chants of "Elections. Elections."

Nonetheless, the atmosphere in the Senate was far less raucous than it had been Monday in the lower house, where Conte won his first confidence vote 343-263.

Responding to Tuesday's result, Conte's former ally Matteo Salvini, the leader of the far-right League party, called it a "day of national betrayal."

Salvini's defection from Conte's previous coalition government last month set off a political crisis, but the League leader's subsequent calls for an election were thwarted by the unexpected alliance of 5-Star and the Democratic Party.

Critics of the new government say that the strongest bind between the new coalition partners is a shared antipathy toward Salvini and the League -- which became the biggest party in Italy's European elections in May and which still polls strongly nationally -- and a mutual aversion toward new elections.

Conte became prime minister in 2018 as a consensus candidate with no party affiliation or government experience. But he has managed the crisis that began last month when Salvini pulled his support from the government to try to force elections.

Instead, Conte persuaded 5-Star, to which he is close, and the Democratic Party to overcome their mutual dislike to form a coalition. The political leader of 5-Star, Luigi Di Maio, was named foreign minister in the new Cabinet.

During his 14 months as interior minister, Salvini solidified his power base through a steady stream of proclamations that often singled out migrants as the biggest threat facing Italy. He was also instrumental in passing a tough security law that was particularly punitive toward nongovernmental rescue ships that operate in the Mediterranean.

Conte said the law would remain but that its sanctions could be relaxed.

The prime minister said that immigration could not be reduced to a "closed-door or open-door" policy and that issues such as illegal migration, human trafficking and the integration of migrants who are allowed to be in Italy needed to be addressed. He said Italy would also push for changes to the European Union rule that asylum seekers must apply for refugee status in the first member state they enter.

For his part, Salvini pledged to work hard in opposition. He is scheduled to preside over the League's annual meeting in the town of Pontida, in the northern region of Lombardy, over the weekend, and he has called for supporters to attend a rally in Rome on Oct. 19.

"Get used to these rallies -- you are in the minority in the country, and even inside your political parties," Salvini said in the Senate, alluding to dissatisfaction over the coalition by some members of its two main parties.

He also argued that the new coalition government had been formed out of "the fear of going to the polls and being sent home."