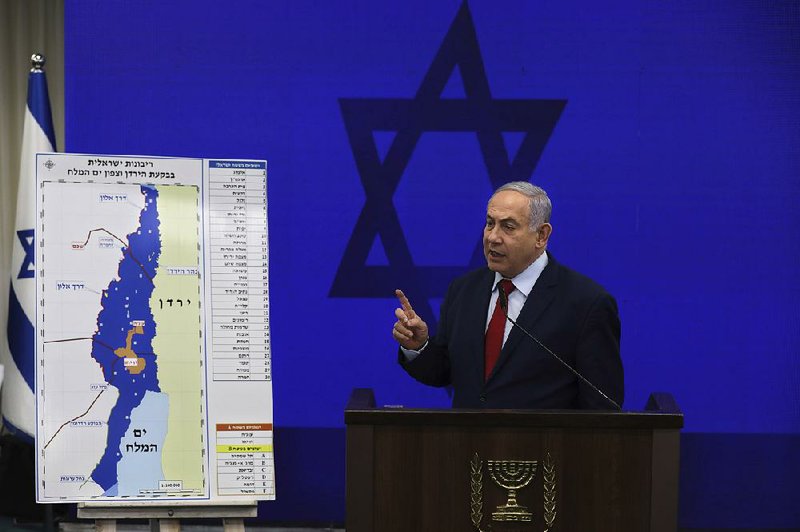 “We haven’t had such an opportunity since the Six-Day War, and I doubt we’ll have another opportunity in the next 50 years,” Israeli Prime Minister Benjamin Netanyahu said Tuesday in Tel Aviv. He cited the “unique, one-off opportunity” that President Donald Trump’s administration’s support provides.

JERUSALEM -- Israeli Prime Minister Benjamin Netanyahu said Tuesday that he will move swiftly to annex nearly a third of the occupied West Bank if voters in next week's election choose to keep him in power.

His plan to annex territory along the Jordan River would give the nation "secure, permanent borders" to the east for the first time in its history, he said.

But it also would reduce any future Palestinian state to an enclave encircled by Israel. Netanyahu's rivals on the left and right largely greeted the announcement as a political ploy in the heat of a campaign in which he is battling to remain in office.

Israel seized the West Bank from Jordan in the 1967 Mideast war. Most of the world considers it occupied territory and Israeli settlements or annexations there to be illegal.

Netanyahu said he wanted to capitalize on what he called the "unique, one-off opportunity" afforded him by President Donald Trump's administration, which has expressed openness to Israeli annexation of at least parts of the West Bank.

The White House said in a statement that there was "no change in United States policy at this time," and it confirmed that the administration's long-promised plan for peace between the Israelis and Palestinians would be released after the Sept. 17 election.

U.S. officials said Netanyahu had told them about his proposal ahead of time and that they had not raised any objections because they do not believe it will affect prospects for an eventual peace agreement. The officials spoke on condition of anonymity because they were not authorized to talk to the media.

Netanyahu earned the largest share of the vote in an April election but ultimately failed to form a governing coalition. He has struggled to maintain his hold on power as he also faces indictments in three criminal cases involving fraud, bribery and breach of trust.

Locked in a close race against Benny Gantz, a centrist former army chief of staff, Netanyahu has tried to shift the focus of the election away from the corruption scandals and toward national-security issues.

Netanyahu has highlighted Israel's increasingly overt military campaign against Iranian expansion and announced the discovery of a site where he said Iran had once pursued nuclear weapons. But Tuesday's announcement was seen as a bid to draw the Palestinian conflict back to center stage in the election campaign.

This was not the first time Netanyahu has days before an election made a promise related to annexation. Before the April election, as he was fighting to shore up right-wing support, he announced his intention to apply Israeli sovereignty to parts of the West Bank. But he gave no specifics and no timetable.

This time, Netanyahu boasted that thanks to "my personal relationship with President Trump, I will be able to annex all the settlements in the heart of our homeland."

Netanyahu said he planned to annex all Israeli settlements in the West Bank and that he would move immediately after forming a new government to proceed in the Jordan Valley, a strategic and fertile strip of territory along the border with Jordan that runs from Beit Shean in northern Israel to the shores of the Dead Sea.

Palestinians see the Jordan Valley as their future breadbasket. Israel's critics say it has been steadily uprooting Arab farmers and herders from the area.

Netanyahu's main opponents -- Gantz and the other former army chiefs who are running in his Blue and White party -- have said publicly that Israel must not yield the Jordan Valley for security reasons, leaving them little room to challenge his plan.

But Gantz and his party criticized Netanyahu's announcement, accusing him of making an empty promise and of playing politics.

Yair Lapid, the No. 2 Blue and White leader and a former finance minister, said that Netanyahu had had 13 years as prime minister and that "no one stopped him from applying sovereignty to the Jordan Valley." Lapid dismissed the announcement as "an election stunt."

Ehud Barak, a former prime minister who is campaigning to oust the current leader, said Netanyahu "has no public or moral mandate to determine things so fateful to the state of Israel."

Palestinian President Mahmoud Abbas said all agreements with Israel will be canceled if Netanyahu presses forward.

"We have the right to defend our rights and achieve our goals by all available means, whatever the results, as Netanyahu's decisions contradict the resolutions of international legitimacy and international law," he said.

Saeb Erekat, the longtime chief negotiator for the Palestine Liberation Organization, warned Tuesday night that if Netanyahu manages to put through his plan, he will have "succeeded in burying even any chance of peace between Palestinians and Israelis."

He added that unilateral annexation of occupied territory was a war crime.

"Israel's unprecedented culture of impunity, enabled by international inaction, is the only explanation for Mr. Netanyahu's audacity in using annexation as an election ploy, and asking the Israeli public to facilitate yet another Israeli crime," Erekat said.

"The Israeli, the international community must stop such madness," he said. "We need to end the conflict and not to keep it for another 100 years."

In a possible sign of Palestinian displeasure, rockets fired Tuesday night from Gaza set off alarms in southern Israel, including in Ashdod, where Netanyahu was hustled offstage by bodyguards to take cover in the middle of a campaign speech.

At the United Nations, Secretary-General Antonio Guterres also rejected the proposal. "Such a prospect would be devastating to the potential of reviving negotiations, regional peace and the very essence of a two-state solution," said U.N. spokesman Stephane Dujarric.

Daniel Kurtzer, a former U.S. ambassador to Israel under Republican and Democratic administrations, said there was a consensus within Israel's national security establishment that Israel should retain control of the Jordan Valley for some period after a peace treaty is signed, to ensure that the Palestinians continue to cooperate with Israel to maintain security.

But unilateral annexation was another thing, he said.

"If Netanyahu now says forever," Kurtzer said, "this clearly will not be acceptable to any present or future Palestinian leader."

Advocates of a two-state solution to the Palestinian conflict, who have been warning that annexation could be disastrous for Israel, said Tuesday that a move like the one Netanyahu was proposing could be enough to drive the Palestinian Authority either to abandon its security cooperation with Israel on the West Bank or to fold up its tents altogether.

Either action could lead to violence that could force Israel to send its troops back into territory where Palestinians have largely policed themselves, said Nimrod Novik, a veteran Israeli peace negotiator.

Information for this article was contributed by David M. Halbfinger of The New York Times; by Josef Federman of The Associated Press; and by James McAuley and Ruth Eglash of The Washington Post. 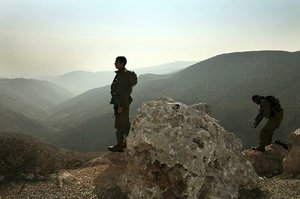 Photo by The New York Times/RINA CASTELNUOVO
Israeli soldiers stand watch over the Jordan Valley near the West Bank Palestinian village of Bardala in 2014 during a tour by members of Israel’s Parliament. Prime Minister Benjamin Netanyahu vowed Tuesday to annex territory along the Jordan River, giving the nation “secure, permanent borders” to the east for the first time in its history, he said.