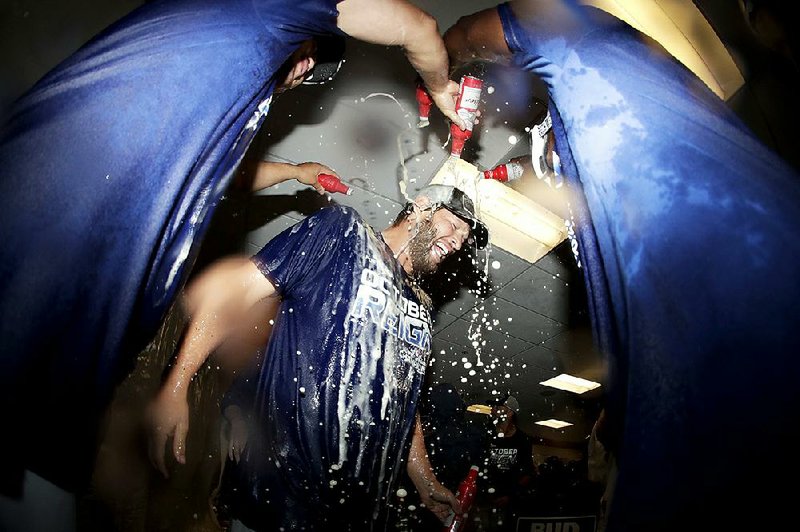 Los Angeles Dodgers pitcher Clayton Kershaw is doused by teammates after the Dodgers clinched their seventh consecutive National League West title during a 7-3 victory over the Baltimore Orioles on Tuesday night.

BALTIMORE -- The Los Angeles Dodgers sprayed each other with bubbly, emptied dozens of bottles of beer while drinking very little of it and essentially carried on in a fashion appropriate for a team celebrating its seventh consecutive NL West tile.

Certainly, the Dodgers were elated about becoming the first team in the majors to clinch a playoff spot this season. Yet, because the occasion was virtually a given since May and not nearly as emotional as their playoff win over Colorado in Game 163 last year, the party was, as Manager Dave Roberts put it, "subdued."

"It was one of those things that we expected it," Roberts said Tuesday night after a clinching 7-3 victory over the Orioles. "It's obviously early in September, but it doesn't take away what we as an organization accomplished."

The Dodgers, with a power-packed lineup and imposing rotation, gained sole possession of first place on April 17 and never looked back. Their final pursuer was the Arizona Diamondbacks, who dropped 18½ games out of first place with a loss to the Mets.

After the last out, the players gathered around the mound for a wardrobe change for the soaking to follow the second-earliest NL West clinching behind the 1975 Cincinnati Reds, who accomplished the feat on Sept. 7.

Sure, the celebration was inevitable. So what?

"When we do get moments like this, I think we do a good job of appreciating what we have accomplished and it's special. It really is," Roberts said. 'To win one division, but to win seven in a row, the consistency of the organization, what we've done, a lot of credit goes to a lot of people. And now it's the idea of refocusing and everything we do going forward is to win 11 games in October."

Los Angeles, coming off consecutive World Series losses to Houston and Boston and seeking its first title since 1988, will likely begin the postseason at Dodger Stadium on Oct. 3 against the NL wild-card team.

Corey Seager homered with two on to cap a four-run first inning against Ty Blach (1-3) and added a two-run drive in the third for a 6-0 lead.

Tagged by Colorado for six runs in five innings during his previous start, Walker Buehler (13-3) limited last-place Baltimore to four hits over seven shutout innings for the team with the lowest ERA in the league. Buehler struck out 11. He has 201 for the season.

TWINS 5, NATIONALS 0 José Berriós surrendered two singles over seven innings in his best start in six weeks, Mitch Garver hit the tiebreaking two-run home run in the seventh, and Minnesota beat visiting Washington. Berriós (12-8) struck out four and walked one. Aníbal Sánchez (8-8) was almost as sharp for the Nationals, finishing with four hits and one walk allowed, along with five strikeouts.

PHILLIES 6, BRAVES 5 Corey Dickerson homered twice to help host Philadelphia's wild-card push and the Phillies hit five home runs overall in a win over Atlanta. J.T. Realmuto, Bryce Harper and Dickerson all homered in the first inning, Scott Kingery hit an inside-the-park homer and Dickerson tacked an insurance run with a solo shot late to help the Phillies win for the third time in four games.

ROCKIES 2, CARDINALS 1 Nolan Arenado hit a 482-foot two-run home run that bounced out of Coors Field in the first inning, Chi Chi González (1-6) got his first big league win in four years and Colorado slowed St. Louis' playoff push. St. Louis had won 23 of 30 coming in to open a four-game lead in the NL Central over the second-place Chicago Cubs.

ATHLETICS 21, ASTROS 7 Matt Olson and Sean Murphy both homered twice, and visiting Oakland tagged Wade Miley for seven runs in the first inning and scored a season high in a rout of Houston. After being blanked in a 15-0 loss on Monday, Oakland recovered to win its seventh of nine and remained ahead of Cleveland for the second AL wild-card spot.

TIGERS 12, YANKEES 11 Jordy Mercer capped a comeback from a six-run deficit with a game-ending single off Chance Adams in the ninth inning, and Detroit overcame six home runs by visiting New York. Brett Gardner and Didi Gregorius each homered twice, and Gleyber Torres and Edwin Encarnación also went deep for the Yankees, whose 276 homers tied Minnesota for the major league lead.