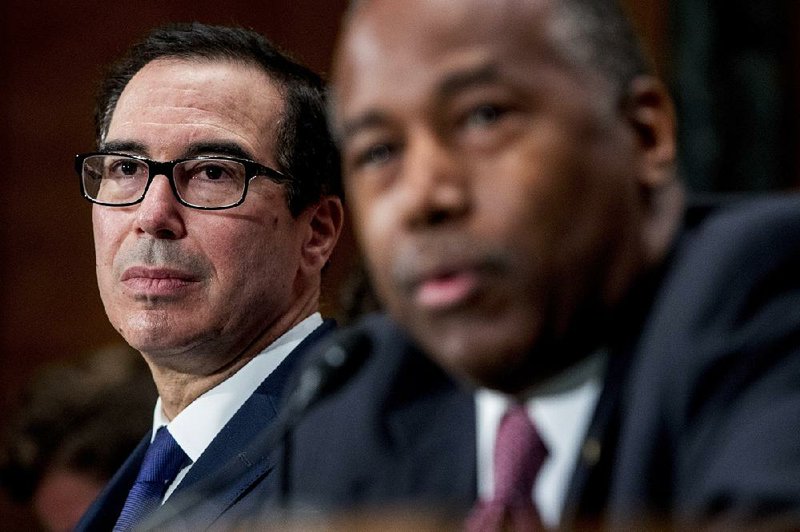 The two finance companies nearly collapsed in the financial crisis 11 years ago and were bailed out at a cost to taxpayers of nearly $190 billion.

The companies have become profitable again and have repaid their bailouts. Under the plan, their profits would no longer go to the Treasury Department but would be used to build up their capital bases as a cushion against possible future losses.

Fannie Mae and Freddie Mac currently have a combined $6 billion in capital but should have about $100 billion, Mnuchin told the Senate panel. "We think they need a lot of capital," he said. The companies "could not operate today if not for the Treasury lines."

Getting to the appropriate level will require raising "third-party" capital, Mnuchin said.

But Mnuchin also said he opposes any "simple" recap and release -- a move hedge funds have long lobbied for that would consist of building up the two companies' capital buffers and then freeing them from federal control. Mnuchin's comment indicates the administration's timeline for ending the companies' conservatorships might be longer than shareholders would like.

Fannie Mae and Freddie Mac together guarantee roughly half of the $10 trillion U.S. home loan market. They don't make home loans. They buy them from banks and other lenders, and bundle them into securities, guarantee them against default and sell them to Wall Street investors.

Calabria said the two companies' capital must be bulked up "to match their risk profiles" and avoid another bailout. "In their current financial condition, the [companies] are not equipped to withstand a downturn in the housing market," he testified, adding, "It keeps me up at night."

Under the administration's plan, Fannie Mae and Freddie Mac would pay a fee in exchange for a government guarantee backing their businesses. The plan is a potential windfall for hedge funds that have invested heavily in the companies' stocks. Those investors have argued for years that the companies should be released from government control, allowing their stock prices to rise.

The plan "would preserve the long-standing government support of the 30-year, fixed-rate mortgage loan," Mnuchin said. "That support, however, should be explicitly defined, tailored and paid for."

Mnuchin acknowledged that for prices of 30-year mortgages to remain close to current market levels, some level of government support would be needed. He said Congress should authorize an explicit, paid-for guarantee "backed by the full faith and credit of the federal government" for qualified mortgages. The guarantee also should be available to competitors of Fannie Mae and Freddie Mac as mortgage financers, he said.

A flash point came over the issue of affordable housing. Fannie Mae and Freddie Mac currently have mandated targets for helping low-income and minority-group borrowers to buy homes.

"The Trump plan will make mortgages more expensive and harder to get," said Sen. Sherrod Brown of Ohio, the committee's senior Democrat.

The Trump proposal would replace the affordable housing goals with a more "efficient, transparent and accountable mechanism," such as a new fee that would be transferred to HUD to promote affordable housing activities. Many consumer and civil-rights groups argue that the plan would not directly increase homeownership among low-income families.

"Essentially they are trying to shrink the government footprint in the market and introduce private guarantors that won't have the same obligations as Fannie Mae and Freddie Mac," said Jesse Van Tol, chief executive of the National Community Reinvestment Coalition.

In addition, housing advocates say, the administration's plan would lead to a bifurcated market that would block first-time homebuyers and low-income borrowers, many of whom are minority-group members, from lower-cost conventional loans. Borrowers who cannot afford 20% down payments and have less-than-pristine credit scores would be channeled into more expensive loans, advocates say.

Those proposals are "about leveling the playing field for Wall Street," Brown said.

Carson on Tuesday blamed the lack of affordable housing on local restrictions related to zoning and rent control as well as neighborhood opposition. He disputed accusations from Democratic lawmakers that the Trump administration does not care about housing discrimination or housing low-income and working-class families, citing a HUD investigation into San Francisco's affordable housing policies.

Under Carson, HUD proposed last month to make it harder for people to prove unintentional discrimination, known as "disparate impact," against mortgage lenders and landlords. Sen. Chris Van Hollen, D-Md., told Carson that the proposal "goes way beyond" the Supreme Court's 2015 ruling affirming that disparate impact can be considered discriminatory even without explicit intent -- but also putting limits on its application in practice.

Carson responded that "We uphold the principles of disparate impact."

Sen. Mike Crapo, R-Idaho, the panel's chairman, has previously proposed legislation to overhaul the housing finance system. He said at the hearing that the administration's plan is close to his proposal, but "my strong preference remains to fix it through comprehensive legislation."

Congress is unlikely to pass sweeping housing legislation before the 2020 presidential election. But some senators said it should be a priority.

Sen. John Kennedy, R-La., implored the officials to put a proposal before Congress. "This whole thing is a car wreck; it's a dumpster fire," Kennedy said. Put it before the committee, "and let senators be senators."

Information for this article was contributed Marcy Gordon of The Associated Press; by Tracy Jan and Renae Merle of The Washington Post; and by Elizabeth Dexheimer of Bloomberg News.