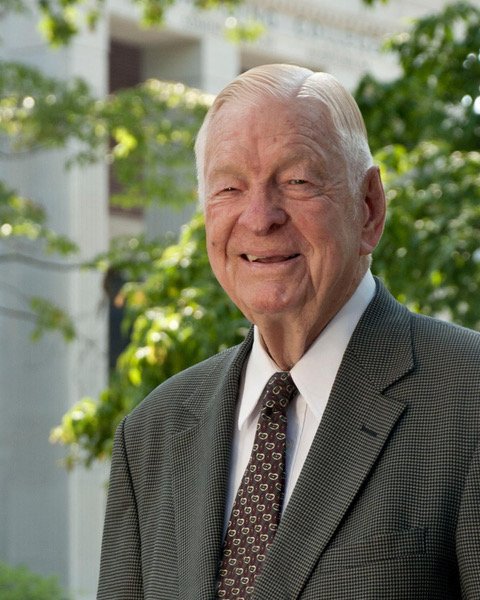 Clifton Loyd Ganus Jr., considered by many the living embodiment of Harding University, died Monday and his legacy can be seen across the campus that he loved.

Ganus, 97, of Searcy was president of Harding University from 1965-87 and was chancellor emeritus at the time of his death. He was the third president of the Church of Christ school located in Searcy.

"He had an incredible impact on the Harding community and its history," President Bruce McLarty said. "This entire community deeply loved this man."

After graduating from Harding in 1943 with majors in history and Bible, Ganus preached in small churches in Mississippi and earned a master's and doctorate in history from Tulane University before returning to his alma mater in 1946 to teach.

"He was the living connection with all our history," McLarty said. "I remember several years ago we went to a recording studio, and I would just feed him topics and he would tell stories about each building on campus. He was the living embodiment of our heritage."

Ganus was described as a gentle, kind man who had a calm confidence about him.

"When you were in his presence, you felt important," McLarty said. "He had a gentle humor, and he was a joyous person."

He always made time for his family during his tenure at the university, said his grandson Bill Ganus.

"In spite of running a rapidly expanding university, writing, and traveling the world teaching, his focus on his family was never distracted," his grandson said. "We had regular all-family meals, weekend trips to the lake."

At that time, Harding had 400 students and four buildings on a 20-acre campus. Today it has 5,122 students representing all 50 states and 50 foreign nations and territories, 371 instructional faculty members, and 47 buildings on 350 acres.

Ganus served in numerous administrative roles beginning in 1956, when he became a vice president. He served 22 years as president, and in 1987 became the university's first chancellor. He was named chancellor emeritus in 2013.

"On my inauguration in 1987, he prayed that my presidency would be better than his, and I will always remember that," said David Burks, a former president and the university's current chancellor. "He was always supportive of me, and that speaks to the type of man that he was."

Ganus established the university's President's Council and Women for Harding organizations to strengthen fundraising and student recruiting efforts, and in 1979 the school attained university status. In 1985, Ganus helped initiate the university's first study abroad program, which has grown to seven programs worldwide.

"He viewed himself as a preacher president," McLarty said. "He was passionate about Christian higher education. He delighted in being a part of that adventure."

Ganus also was behind Harding resuming intercollegiate athletics in 1957, and the university's main athletics facility -- the Ganus Activities Complex -- is named in his honor.

"He knew the athletes' numbers, where they were from, their stories and their stats," McLarty said. "My last visit with him was on Sunday afternoon, and he made sure to ask me how the teams did over the weekend."

When the football players reported to school three weeks ago, Ganus was among the first faces they saw.

"He was very weak, but he asked his family to take him there to meet the players," McLarty said. "One football player spoke in chapel today about how [Ganus] already knew his name when he introduced himself."

"They lost someone that people looked up to and followed," said Beebe, who worked with Ganus to create the Beebe Capps Expressway that runs through the middle of Searcy and borders the university. "He helped build that university to the status that it is now."

Bill Ganus said every experience with his grandfather was a memory in the making.

"From working in the garden to visiting villages in Uganda, he spent every day with the same, consistent focus on doing what needs to be done," he said. "When he was with you, he was with you. No distractions."