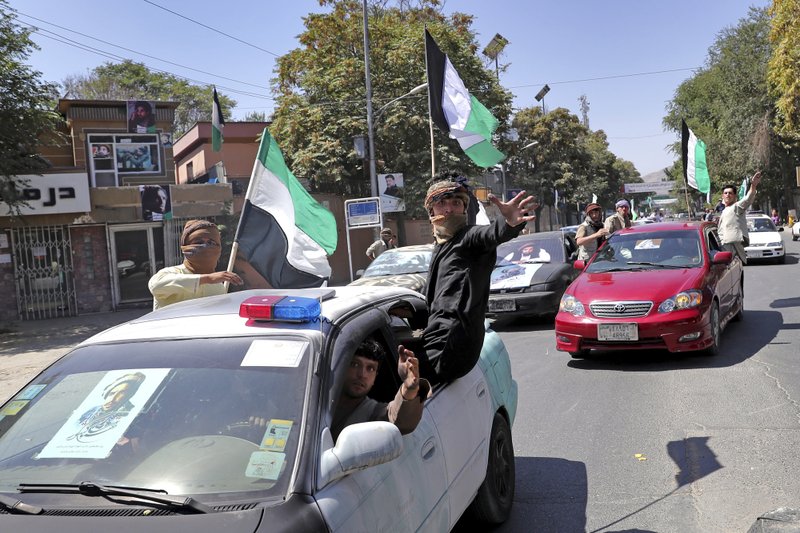 Afghans travel in convoy with cars decorated with black flags and portraits of late Commander Ahmad Shah Massoud marking the 18th anniversary of his death, in Kabul, Afghanistan, Monday, Sept. 9, 2019. Afghans are bracing for a possible new wave of Taliban violence after President Donald Trump abruptly called off talks with the insurgent group, which vows to continue its fight against what it calls &quot;foreign occupation.&quot; (AP Photo/Ebrahim Noroozi)

KABUL, Afghanistan -- Afghans braced for a possible new wave of Taliban violence Monday after President Donald Trump abruptly broke off nearly a year of talks with the insurgent group just when a deal to end America's longest war seemed to be at hand.

Trump's weekend announcement that he had canceled a secret meeting with Taliban leaders and the Afghan president at Camp David, Md., and halted negotiations left many in Washington and Kabul scrambling to understand just what happens now.

"They're dead," Trump said of the negotiations on Monday, after the Taliban signaled they would return to talks. "They're dead. As far as I'm concerned, they're dead."

Trump said his administration is "looking at" whether to proceed with troop reductions that had been one element of the preliminary deal with the Taliban struck by presidential envoy Zalmay Khalilzad.

"We'd like to get out, but we'll get out at the right time," Trump said.

The Taliban said Monday that Trump's decision to upend the deal just before its signing "displays lack of composure and experience," and they vowed to continue their fight against "foreign occupation."

Trump's suspension of the negotiations "will harm America more than anyone else," the group said.

"What more violence can they bring?" Afghan presidential spokesman Sediq Sediqqi said in an interview. "What else can they do? You know they have killed 300 civilians in the past three weeks. ... So we will not be surprised if we see more attacks, but they have already done it."

[Video not showing up above? Click here to watch » https://www.youtube.com/watch?v=NNGzs10_XW4]

Political analyst Waheed Muzhda was gloomy about the prospects for the country.

"Unfortunately, all the months of efforts came to an end with no result," he said, "and I think the fight in Afghanistan will continue for long years."

American advocates of withdrawing from the battlefield questioned on Monday whether Trump's decision to cancel the meeting with Taliban and Afghan leaders had poisoned the prospects for peace.

"The Camp David ploy appears to have been an attempt to satisfy Trump's obsession with carefully curated public spectacles -- to seal the deal, largely produced by special envoy Zalmay Khalilzad and Taliban negotiators, with the president's imprimatur," said John Glaser, director of foreign policy studies at the Cato Institute.

Some administration officials, including national security adviser John Bolton, did not back the agreement with the Taliban as it was written, a U.S. official familiar with the negotiations said. They didn't think the Taliban can be trusted. Bolton advised the president to draw down the U.S. force to 8,600 -- enough to counter terror threats -- and "let it be" until a better deal could be hammered out, the official said.

At the Pentagon, spokesman Jonathan Hoffman declined Monday to comment on the outlook for the administration's plan to reduce the U.S. troop level in Afghanistan.

Lawmakers on both sides of the aisle sharply criticized Trump over the weekend for inviting Taliban leadership to Camp David.

On Monday, Trump defended his invitation, arguing that wars would "go on forever" without meetings.

"I took my own advice. I liked the idea of meeting. I've met with a lot of bad people and a lot of good people" since becoming president, he said.

Having the meeting at the White House would have been "a step too far," he added. "And I thought Camp David would be good, and I still do."

The president also pushed back against a report that Vice President Mike Pence and Bolton had urged him to call off the meeting.

"We had a meeting scheduled," Trump said. "It was my idea. And it was my idea to terminate it."

Shortly before Trump addressed reporters, Pence echoed the president's claim that the report was "fake news."

Tens of thousands of Afghan civilians and more than 2,400 American service members have been killed in nearly 18 years of war that began when the U.S. invaded after the Sept. 11, 2001, attacks. The Taliban ruled Afghanistan from 1996 to 2001, when they were ousted by the U.S. military for hosting 9/11 attacker al-Qaida and the terrorist group's founder, Osama bin Laden.

Afghans were wary of fresh violence in part because Trump's announcement came shortly before a string of highly sensitive days in Afghanistan, including Monday's anniversary of the killing of anti-Taliban commander Ahmad Shah Massoud, the major Shiite Muslim holy day of Ashoura today, and Wednesday's 9/11 anniversary.

There were no immediate reports of any major attacks in the country, but the streets of the capital, Kabul, were largely empty as armed supporters of Massoud, a rare Afghan unifying figure who was killed two days before 9/11, roamed in flag-draped vehicles, firing into the air in a show of power. One police officer was killed, officials said.

Elsewhere in Kabul, a roadside bomb wounded three civilians, but there was no claim of responsibility. And in northeastern Takhar province, the Taliban claimed attacks on at least two districts overnight, with no immediate reports of casualties.

In calling off negotiations, Trump cited a Taliban car bombing Thursday near the U.S. Embassy in Kabul that killed an American service member along with 11 other people. The insurgent group has defended its continued attacks even while a deal was taking shape, saying they were intended to strengthen its bargaining position.

The emerging agreement had started unraveling earlier, however, after Afghan President Ashraf Ghani postponed his trip to Washington and the Taliban refused to travel to the U.S. before a deal was signed, according to a former senior Afghan official.

He gave two reasons. First, the Taliban refused to sign an agreement that didn't state the end date for a complete withdrawal of American forces. That date was to be either November 2020, the same month of the U.S. presidential election, or January 2021, he said. Secondly, the U.S. was unsuccessful in persuading Ghani to postpone the Afghan presidential election set for Sept. 28, the official said.

Trump's decision to abandon talks got a mixed reaction in Afghanistan.

Many people seek peace above all after four decades of various conflicts. But some fear a failed or weak deal could lead to the government's collapse and bring another civil war like the one that raged in the 1990s before the Taliban swept into power.

Some feared that the deal that was on the table would do little or nothing to stop the carnage against the Afghan people. Also, many Afghan women have been wary of a Taliban return to power in some form under the intra-Afghan talks that would follow a U.S.-Taliban deal, recalling the years of oppression under a strict form of Islamic law.

Under the agreement in principle that the U.S. and the Taliban had worked out, the U.S. would withdraw about 5,400 of the 14,000 American troops in the country within 4½ months, and the insurgents would agree to prevent Afghanistan from being used as a launchpad for global terror attacks by al-Qaida and others.

But such assurances would be "unbelievable," said Sediqqi, the Afghan presidential spokesman. He said other groups across the region would have seen the deal as a victory for the Taliban and "would have joined them."

He said the only way now for the Taliban to re-enter the peace process is to accept a cease-fire and speak directly with the Afghan government, which has been sidelined in the talks because the Taliban dismiss it as a U.S. puppet.

Others in the government of Ghani reacted positively to Trump's decision.

"Inviting un-repenting & unapologetic terrorists and mass murderers to Camp David would have tarnished the stature of the camp. ... Gratified that US returned back to a principled stand," Ghani's running mate, Amrullah Saleh, tweeted.

Ghani, who is seeking re-election, has been insisting that the country's Sept. 28 election be held as scheduled and not set aside by a U.S.-Taliban deal. Trump's decision appears to have suddenly opened the path to a vote.

Ghani also invited Taliban chief Maulvi Hibatullah Akhunzada to a videoconference and urged him to "at least talk with people" instead of hiding.

Trump has been talking of a need to withdraw U.S. troops from the "endless war" in Afghanistan since his 2016 presidential campaign. And he said anew in a tweet on Monday, "We have been serving as policemen in Afghanistan, and that was not meant to be the job of our Great Soldiers, the finest on earth."

He added, without explanation, "Over the last four days, we have been hitting our Enemy harder than at any time in the last ten years."

There has been no evidence of a major U.S. military escalation.

Information for this article was contributed by Rahim Faiez, Robert Burns, Deb Riechmann, Matthew Lee, Cara Anna, Rahim Faiez, Jonathan Lemire and Julie Walker of The Associated Press; and by Felicia Sonmez of The Washington Post.