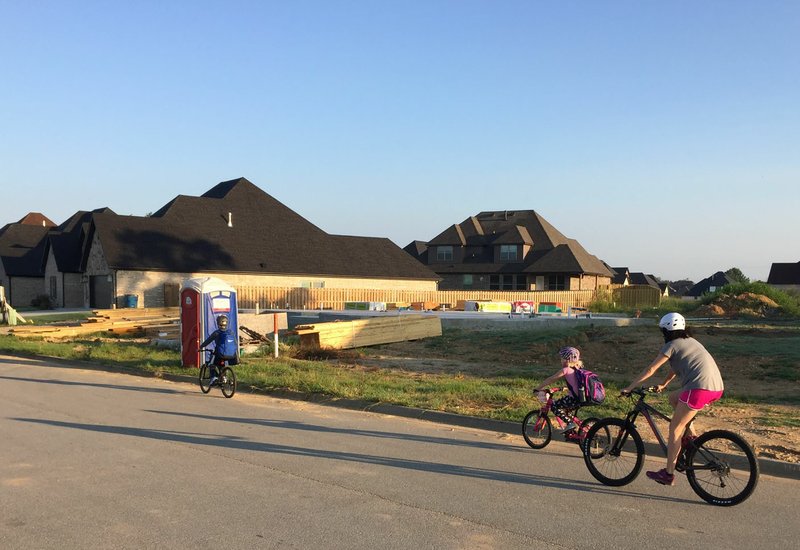 NWA Democrat-Gazette/DAVE PEROZEK A woman and two children bike to school on Wednesday, Sept. 4, 2019, along Southwest Edinburgh Avenue in Bentonville through a developing neighborhood. Residents of the adjacent Lochmoor Club subdivision have objected to the Bentonville School District's decision to eliminate bus service to their neighborhood.

BENTONVILLE -- A subdivision's residents gathered more than 50 signatures to force a special meeting of the School Board focused on the recent decision to discontinue busing to their neighborhood.

Special board meetings called by community members are extremely rare. Travis Riggs, who has served on the board for 16 years, said he does not recall such an event during his tenure.

The numbers of Lochmoor Club subdivision students in grades K-8 enrolled in the Bentonville School District:

Lochmoor Club subdivision residents objected when they found out last month the district was eliminating bus service from the neighborhood for elementary, middle and junior high students to their respective schools.

Several people spoke at the board's Aug. 20 meeting, arguing their kids' safety is at risk because the only route to walk is along Southwest Edinburgh Avenue through a neighborhood deemed a construction zone. Multiple homes are under construction and while there are sidewalks, they are not continuous.

The board did not take action on the matter at the meeting.

Special board meetings may be called by the president, secretary, any three board members, or by a verified written petition signed by 50 qualified electors of the School District, according to board policy. The petition must include the address of each elector and must state the purpose of the meeting.

The special meeting is set for 4:45 p.m. Sept. 17 before the regularly scheduled monthly meeting.

Eric White, board president, said he welcomes the Lochmoor Club residents to make their case and exercise their right to call a special meeting, as allowed by state law.

"I hope the entire board is in the same position of, let's go in with an open mind and listen to their concerns," White said.

He wasn't certain when the board would make a decision on the matter.

There are 132 students living in Lochmoor Club who attend either Willowbrook Elementary, Bright Field Middle or Fulbright Junior High; about half were riding the bus last month before the district eliminated the option, according to the district.

The subdivision is roughly a mile from the schools via the walking route, though many addresses within Lochmoor Club are more than a mile away. Bus service is provided for high school students because Bentonville High School is more than 3 miles away.

The district typically does not provide transportation for students who live within a mile of their zoned school. Exceptions are made in cases where students would have to cross a major road or highway or when there are complications caused by road blockages or construction.

Administrators decided to eliminate bus service for Lochmoor Club mainly because they saw more sidewalks had been built between the subdivision and the schools. That allowed the district to allocate its resources as far as buses and bus drivers more efficiently, Wright said.

"Nothing's changed from an administrative standpoint," Wright said. "But we respect their right to bring their concerns before the board."

Lochmoor Club residents must provide their meeting presentation to administrators by Wednesday for their prior review, Rhuda said.