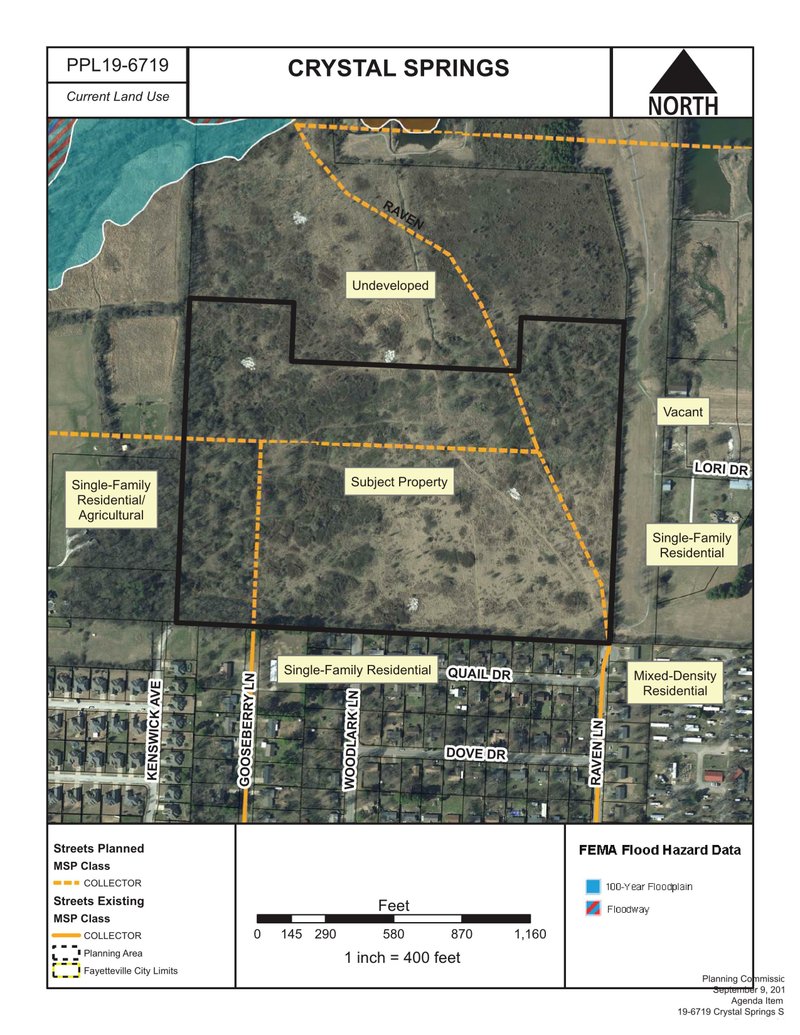 Courtesy/CITY OF FAYETTEVILLE A map shows the location of a proposed addition to the Crystal Springs subdivision north of Woodlark and Raven lanes in Fayetteville. The Planning Commission on Monday considered a preliminary plan for the 163-lot project on 92 acres.

FAYETTEVILLE -- A preliminary plan for a subdivision on the northwest part of town gained Planning Commission approval Monday, 13 years after a similar plan passed the city's decision-making bodies but was never built.

Commissioners voted 7-1 to approve the plan for the fourth phase of the Crystal Springs subdivision. The plan would add 163 lots, including two for detention ponds, to about 400 existing homes that sit to the north. The site is north of Mount Comfort Road and west of Deane Solomon Road.

The 92-acre addition is zoned for residential single-family development, up to four units an acre. Development of homes is planned in three phases. The plan would have Emil Drive extend from the subdivision east to Deane Solomon Road. Existing cul-de-sacs in the Birdhaven Terrace subdivision to the south also would connect to the development.

The site was a source of controversy in 2006. Neighbors at the time said the roads couldn't handle the load of additional houses. That plan would have had 275 lots, and at the time Mount Comfort Road was two lanes. The City Council passed the plan, but it was never built and its approval expired.

The original subdivision proposal came through in the 1990s and resulted in the development of Gary Hampton sports complex next to Holcomb Elementary.

A lot has changed in the area since Crystal Springs' fourth phase was first proposed in 2005, said Jesse Fulcher with Rausch Coleman Homes, the applicant behind the project. Mount Comfort has been widened to four lanes, with a signal at Shiloh Drive and extensive work at Rupple Road, he said.

"There have been tens of millions of dollars in improvements in this area that were not in place in 2005 when we had all of these concerns," Fulcher said.

Eleven people from the public spoke, mostly from the Birdhaven Terrace subdivision. All were against the project, citing concerns with traffic flowing into their neighborhood. Some asked for a bridge to be built over Clabber Creek that would connect Phase VI of Crystal Springs to the other additions to the north, which was a point of contention in 2006.

Fulcher said building a bridge could cost $2.5 million and would require putting down about 900 feet of concrete channel. The city's planning staff agreed with the developer that building the bridge would be cost prohibitive.

The city has no plans to build a bridge within the next five years, although it is included in the overall street plan, Planning Director Andrew Garner said. Future planning commissions and city councils will have options to consider for the area, he said.

"We can't predict how the property to the north will develop, but there certainly will be opportunity to connect to build a bridge at some point -- whether it could be for vehicles, or it may end up being more cost-effective to do a pedestrian or multi-use trail-type connection between the neighborhoods," Garner said.

Commissioner Kris Paxton was the no vote against the proposal, saying he had concerns the plan could compound traffic into a dangerous situation. Other commissioners disagreed with that assessment, saying the plan followed all of the city's requirements and warranted approval.

"Asking a 92-acre neighborhood to solve the problems of Mount Comfort is just unreasonable," Commissioner Rob Sharp said. "I think they've done every single thing that they can do."

Joyce Thompson, a Gooseberry Lane resident, said the 2006 proposal's approval expiring came as a surprise to neighbors. The street connection to Deane Solomon Road likely won't be helpful because that road needs improvement, she said, and traffic is already flowing from Rupple Road.

As the street improvements have come to the area, so has traffic and development, Thompson said.

• Variances to city code that will prevent Vance Arnold from having to develop his parking lot east of Fayetteville High School at 404 S. Buchanan Ave. Arnold’s permit is set to expire in three years.

• Rezoning a lot at 3030 W. Old Farmington Road to allow up to 18 units per acre, instead of eight. Commissioners discussed the need for a neighborhood plan for the area.