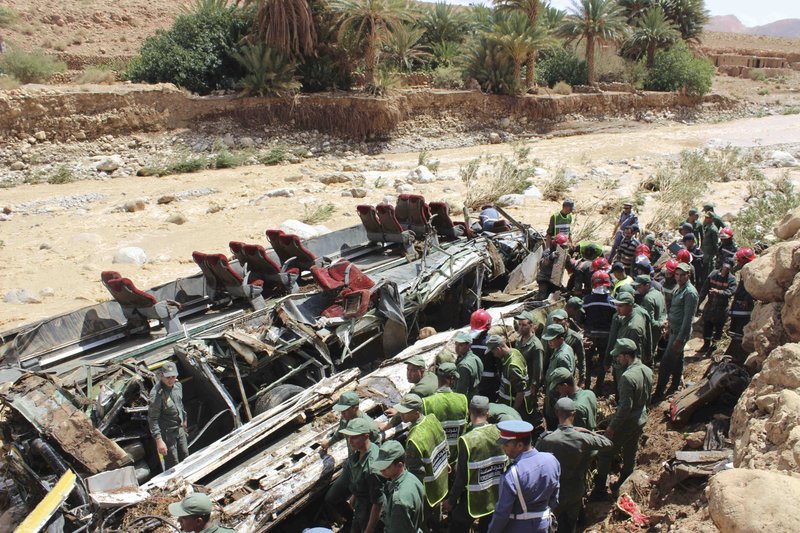 Security forces gather at the site of a bus crash in the town of Errachidia, Morocco, Sunday, Sept. 8, 2019. Morocco's state news agency says 14 people have been killed and 29 others injured when a bus overturned on a bridge amid flooding in south-central Morocco. The MAP agency says authorities are still searching for any others missing, and they recovered three bodies on Monday morning. (AP Photo)

Morocco bus crashkills 14 on board

RABAT, Morocco -- Fourteen people were killed and 29 others injured when a bus overturned on a bridge amid flooding in south-central Morocco, the state news agency reported Monday.

The MAP news agency said authorities were searching for any others who might be missing after recovering three bodies Monday morning. It wasn't immediately clear how many people in all were on the bus. The bus overturned Sunday near Errachidia, in a usually arid region hit by flooding after torrential rains.

Photos of the aftermath showed the badly damaged bus in a now dry ravine, its roof gone and all the windows smashed. Police and military rescue teams were dispatched with boats and helicopters to search for the missing people. The bus driver was initially listed among the missing but then showed up at a hospital to be treated Monday.

The bus was traveling between the coastal city of Casablanca and Rissani, a town close to Morocco's eastern border with Algeria.

Nongovernmental organizations report that the Special Action police force carried out 57 suspected extrajudicial killings in July alone within Caracas, Michelle Bachelet said in an oral presentation on Venezuela to the U.N. Human Rights Council in Geneva.

Bachelet's latest presentation came after a scathing written report issued in early July that drew a government backlash. It found a "pattern of torture" under the government of President Nicolas Maduro and cited violations such as arbitrary detention, extrajudicial killings, sexual violence and enforced disappearances.

Bachelet's latest presentation noted some areas of progress, while pointing to more cases of human-rights violations and declining conditions as more than 4 million Venezuelan have fled a country beset by hyperinflation that leaves monthly minimum wages equal to $2.

While Bachelet has called for officials to dismantle the feared Special Action police force, the unit has actually received ongoing support from the highest levels of the government, she said.

CAIRO -- Egypt's foreign minister on Monday called for more support for neighboring Sudan's new civilian-led government, including getting it off the U.S. list of countries sponsoring terrorism.

The U.S. named Sudan as a state sponsor of terrorism in 1993. In one of its last acts, President Barack Obama's administration began a formal process to de-list Sudan. However, this was put on hold when mass protests began in December against President Omar al-Bashir's three-decade rule, which ended when the military ousted him in April.

Foreign Minister Sameh Shoukry said Egypt is now working with Washington to end Sudan's international pariah status. The country has a newly installed government under a power-sharing agreement between the pro-democracy movement and the military, which many feared would cling to power.