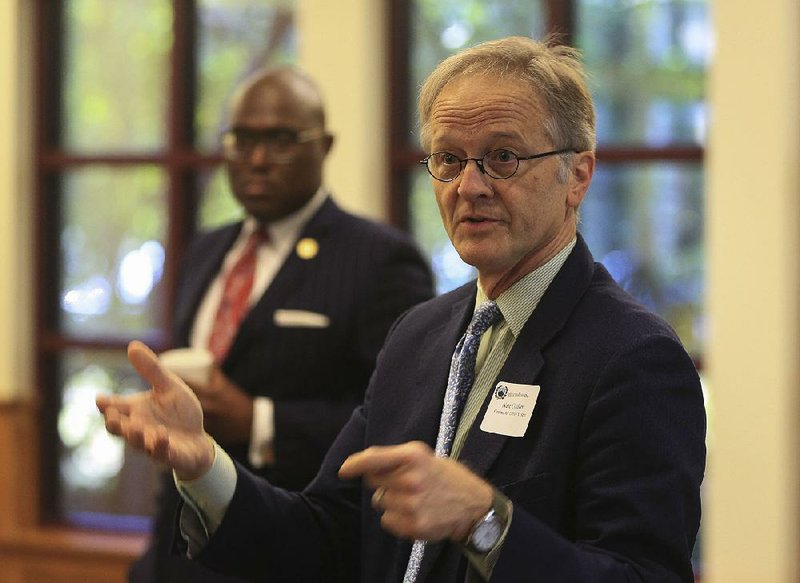 Meeting at the University of Arkansas at Little Rock's Bailey Alumni and Friends Center, Scott called on representatives from a couple of dozen organizations to describe the services they offer to educate and otherwise support those who are newborns through young adults, and all of their families.

"No longer will the city of Little Rock be silent on education," Scott said at the conclusion of what city officials labeled an education roundtable. About 75 leaders in their fields attended. They included the superintendents of the Little Rock and Pulaski County Special school districts and the chief executive officer of eSTEM Public Charter Schools.

The city and its traditional school districts, charter school systems and private schools operate independent of one another, but Scott said the welfare of the city hinges on the well-being of children and youths, and that it is necessary for all organizations to work together -- "to take an all hands on deck approach" -- for the benefit of the students.

"The city has to be involved, it has to be engaged, and it has to invest in the Little Rock School District and in education overall to create a world-class education system," the mayor said. "Whether they are in public, private or charter schools, they are all our children and we want to make sure that every child -- no matter what decisions their parents have made for them -- has a successful, equitable and adequate education system."

The morning session was loosely organized around the themes of services for children from prenatal through age 5; literacy programs, including after-school and summer programs; social issues including mental health care; and workforce and professional preparation.

Roundtable participants will now serve on one or more working groups related to those topics.

Scott said the leaders must focus on implementation of partnerships to enhance services.

Kendra Pruitt, Scott's senior policy advisory, asked the participants to commit to attending at least one meeting by the end of the year for the purpose of putting together recommendations for the city on the various topics.

"We know that there are some things that are out of our control in regard to education. It's just not our call," Pruitt said. "But there are things that we can do, and we want to do what we can to make sure our students and our education system are world class."

In regard to infants and toddlers, Tonya Williams, director of the Arkansas Division of Child Care and Early Childhood Education, told the audience that 85% of brain development occurs before a child ever enters a school building.

She urged participants to learn the data about the annual birthrates in Little Rock and how infants and toddlers are cared for before starting school. More than half of the children are cared for in poor-quality spaces, she said.

"We see things people in this room would never tolerate for their own children," she said, adding, "I'm just keeping it real."

Williams and others, including former gubernatorial candidate Jared Henderson, pediatrician Chad Rodgers and Little Rock Education Association President Teresa Knapp Gordon, talked about Arkansas' top ranking in the nation in percentages of children who suffer trauma and the negative impact that has on education.

Gordon pleaded to find ways to prevent the trauma.

Laura Danforth, faculty member in the University of Arkansas at Little Rock's College of Education and Health Professions, said only 5% of social workers are working in schools, putting the burden for that support to students on teachers and administrators.

Literacy instruction, chronic absenteeism and the availability of after-school and summer programs were other topics addressed Monday.

The traditional school districts and the city of Little Rock provide instructional and recreational summer programs, but they don't always last all summer or all day, creating hardships for working parents, said Mike Poore, superintendent of the Little Rock School District.

Ryan Davis, director of Children International at UALR, said his organization has received funding that allows it to offer programs that can supplement other summer and after-school programs. He urged that a menu of programs be provided to parents for their children.

In regard to literacy instruction, Scott noted that organizations such as AR Kids Read, City Year Little Rock, Central Arkansas Library System, Arkansas Campaign for Grade Level Reading, Imagination Library and doctors' offices are in large part competing for the same grants to support their services to children.

How can we be more coordinated? he asked.

Margaret Ellibee, chancellor of the University of Arkansas-Pulaski Technical College, and Kristi Barr, director of workforce development for the Little Rock Regional Chamber of Commerce, talked about efforts in terms of better preparing students for college and careers -- including trades -- partly through the Ford Next Generation Learning model of career-focused academies that are being planned for Pulaski County high schools.