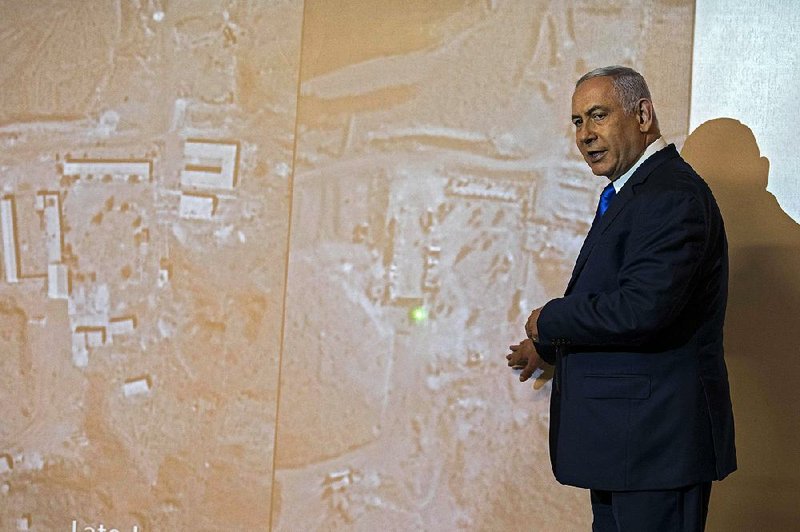 BERLIN -- The United Nations' atomic watchdog confirmed Monday that Iran is preparing to use more advanced centrifuges, another breach of limits set in the country's slowly unraveling nuclear deal with major powers.

Iran had already announced the step, its latest violation of the 2015 agreement, as it tries to pressure European signatories to find a way to maintain oil shipments and ease the toll of U.S. sanctions on the Iranian economy.

The International Atomic Energy Agency reported its inspectors verified the installation of new centrifuges. The agency said all had been "prepared for testing" but none yet tested at the time of the inspection Saturday and Sunday.

Benjamin Netanyahu's announcement came as he hopes the U.N. agency will take tougher action against Iran, and was also made in the final stages of Israeli national elections, drawing criticism from opponents that the news conference was a campaign stunt.

The nuclear deal was meant to keep Tehran from building atomic weapons -- something Iran denies it wants to do -- in exchange for economic incentives. Its collapse started with the United States unilaterally withdrawing from the deal last year and imposing increased sanctions.

The other signatories -- Britain, France, Germany, China, Russia and the European Union -- have been struggling to salvage the agreement and find a way to meet Tehran's demands.

To put pressure on them, Iran has already pushed past limits in the deal, called the Joint Comprehensive Plan of Action on nuclear enrichment purity and stockpiles of enriched uranium.

A centrifuge is a device that enriches uranium by rapidly spinning uranium hexafluoride gas. The energy agency said the ones its inspectors saw included 30 advanced IR-6 and three IR-6s models, as well as multiple IR-4 and IR-5 models.

Under the atomic accord, Iran has been limited to operating 5,060 older-model IR-1 centrifuges.

Asked what the new centrifuges could mean to enhance Iran's ability to enrich uranium, International Atomic Energy Agency Acting Director General Cornel Feruta said "output is not a simple matter" but also it was "not for the agency to judge what these actions will bring."

"We have made it very clear that the role of the agency is to report the facts to members of the JCPOA and also the board," Feruta told reporters in Vienna.

Russia's permanent representative to international organizations in Vienna, Mikhail Ulyanov, downplayed the development, saying after Iran revealed its step about centrifuges that the move "shouldn't be overdramatized."

"Yes, it's another deviation from JCPOA, but new activities will remain verifiable by IAEA and reversible," he said in a tweet. "No proliferation threat, just a strong signal that balance within the JCPOA must be restored."

Feruta, who returned Sunday night from Tehran, told the agency's board in Vienna on Monday that inspectors on the ground continue "to verify and monitor Iran's nuclear-related commitments under the JCPOA."

He said he emphasized to Iranian authorities "the importance of full and timely cooperation by Iran."

That mirrored a line in a recent energy agency report on Iran that suggested Tehran wasn't as forthcoming with answering questions as the agency hoped.

"I also stressed the need for Iran to respond promptly to agency questions related to the completeness of Iran's safeguards declarations," Feruta said.

Feruta told reporters the meetings had gone well, "covering a full range of issues in our cooperation, and I was pleased with the tone and the input we received in those conversations."

After the report, China blamed the United States for the situation and called for world powers to stick to the 2015 deal with Tehran.

"The U.S. should abandon wrong practices such as unilateral sanctions and maximum pressure on Iran," Foreign Ministry spokeswoman Hua Chunying said in Beijing.

French President Emmanuel Macron has been talking both to Washington and Tehran about a proposal to create a $15 billion line of credit for Iran to entice it to remain in the nuclear deal.

"There are confidential conversations among the partners about the specific details," Breul said. "Various news reports are circulating that we won't comment on further."

He reiterated that Germany considers Iran's centrifuge plans "a step in the wrong direction."

"We call on Iran to meet its commitments under the JCPOA and to return to them," Breul said.

Speaking to reporters Monday, Netanyahu said Israel discovered the facility, located in the central Iranian town of Abadeh, by using information gathered in a trove of documents Israeli agents stole from an Iranian warehouse and made public early last year.

He provided no details or evidence of what those experiments were, but he showed two satellite photos. The first, taken in June, showed the facility intact. The second, taken in July, showed parts of the building had been destroyed, in what he said was an Iranian cover-up after Israel discovered the facility. Abadeh is a small city famous for its carpets, located some 300 miles southeast of Tehran, Iran's capital.

Netanyahu's announcement also provided a distraction from Israel's heated election campaign. Israel is holding a do-over election on Sept. 17 after Netanyahu failed to secure a parliamentary majority in April elections.

Netanyahu has tried to keep the campaign focused on issues of national security, considered one of his strengths, and away from a looming corruption case against him.

One of his main rivals, Blue and White party candidate Yair Lapid, accused Netanyahu on Twitter of using the Iran disclosure as "election propaganda at the expense of security."

Feruta would not comment on a Saturday tweet by John Bolton, U.S. President Donald Trump's national security adviser, that the International Atomic Energy Agency informed its board that "Iran may be concealing nuclear material and/or activities."

"The evaluations regarding the absence of ... nuclear material and activity in Iran remain ongoing," Feruta said.