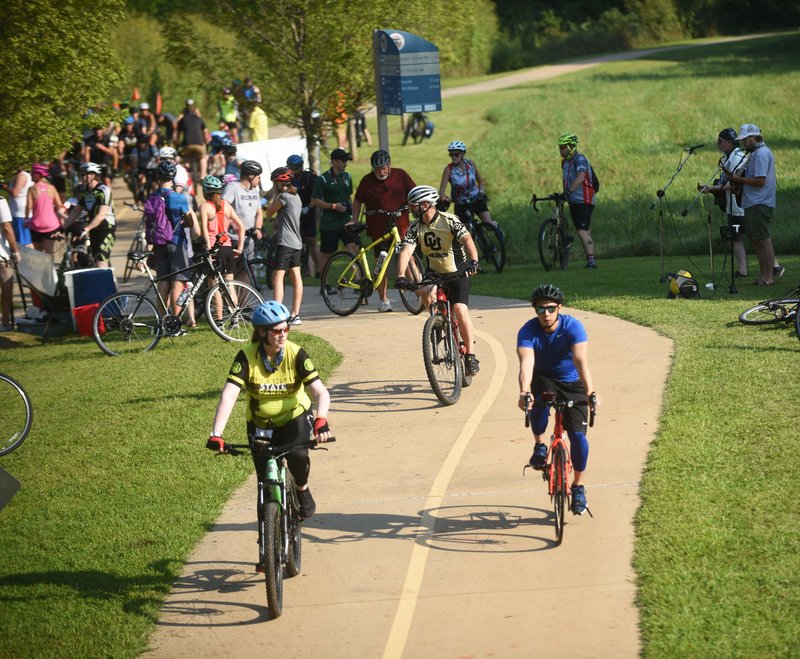 NWA Democrat-Gazette/FLIP PUTTHOFF SQUARE TO SQUARE Riders leave a rest stop in Rogers on Saturday Sept. 7 2019 en route to Fayetteville during the Square to Square bicycle ride on the Razorback Greenway. The 30-mile ride began near the Bentonville square and ended near Fayetteville's downtown square. Riders could pedal all or part of the route. Three rest stops along the way offered refreshments, bike maintenance and live music. A post-ride party awaited riders as they rolled into Fayetteville. The ride is held twice each year starting in either Bentonville or Fayetteville. Square to Square celebrates the regin's cycling opportunities, downtown squares and the Razorback Greenway.

The Arkansas Department of Transportation awarded money to several Northwest Arkansas projects through its Transportation Alternatives Program and Recreational Trails Program for 2019, the agency announced Monday.

Tim Conklin, with the Northwest Arkansas Regional Planning Commission, said he was excited to learn about the awards.

"These projects are part of the overall Northwest Arkansas Bicycle and Pedestrian Master Plan and link local and regional destinations to the Razorback Regional Greenway," Conklin said.

The Transportation Alternatives Program provides money for programs and projects defined as alternatives for pedestrians, bicyclists and other nonmotorized forms of transportation.

It was authorized by the federal Fixing America's Surface Transportation Act. The program is a reimbursement-type grant program, which provides for an 80% federal share and a 20% local match from eligible applicants.

The Recreational Trails Program is funded through a portion of the alternatives program set aside specifically for recreational trails maintenance, restoration of existing trails, development and rehabilitation of trailside and trailhead facilities, trail linkages and construction of new trails.

A few of the larger alternatives program projects in other parts of the state include the Downtown Streetscape in Van Buren and 14th Street's Pedestrian Bridge over the Union Pacific Railroad in North Little Rock. Trails projects include two trailheads for Fairfield Bay's ATV/UTV Trails, additional mountain bike trails for Boyle Park in Little Rock and trailhead improvements for the Delta Heritage Trail in Arkansas City.