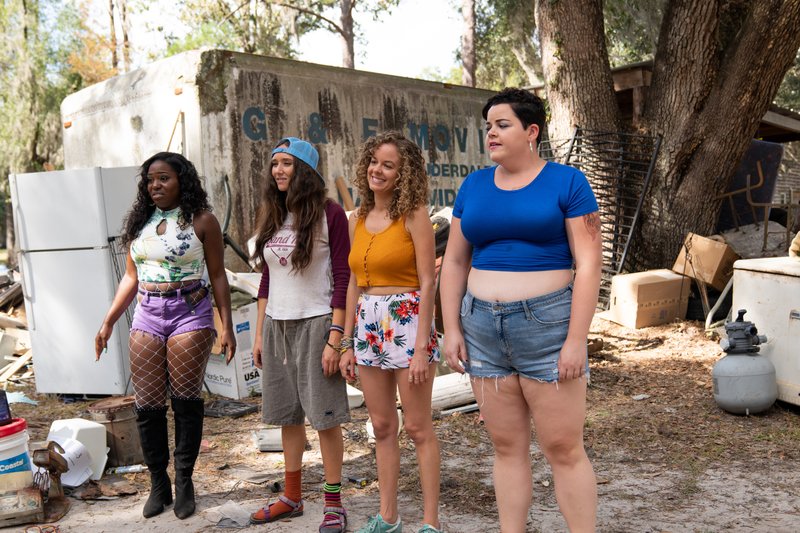 Laci Mosely (left) stars as Jayla, Patty Guggenheim as Erica, Laura Chinn as Shelby and Melanie Field as Kaitlin in Pop's Florida Girls. The series, filmed in Georgia but set in Florida, is one of two new offerings that showcase "The Sunshine State" in all its glory.

LOS ANGELES — Florida! America's joke state! Home to fire ants, sand spurs, palmetto bugs, manatees, alligators, hurricanes, floods, the "Florida man" meme (plus actual Florida men) and the "stand your ground" law (see: Florida men). A land of promise and false promises, built on swamps and speculation, purported site of the Fountain of Youth and a place where people go to die. With its florid flora and prehistoric fauna, its end-of-the-road otherness, its castles literally built on sand, this flat appendage dangling from the southeast corner of the continental U.S. makes a fine backdrop for all kinds of craziness. (I lived there for a couple of years, attending an alternative college in a Gulf Coast tourist town whose library was in the pink marble mansion of a circus magnate, and know something about it.)

The self-styled Sunshine State has recently popped up as the setting and subject of two fine television comedies: On Becoming a God in Central Florida, which premiered Aug. 25 on Showtime (the first two episodes are already available for free on YouTube) and Pop TV's Florida Girls. It isn't the fancy Florida of Ballers or Siesta Key, but rather that of TNT's Claws. (Technically, like Claws, it isn't Florida at all: On Becoming a God was filmed near New Orleans, Florida Girls in Georgia. Claws is filmed in and around New Orleans.) Both series are set mostly on the margins, among the hardworking and the hardly working. Honest, engaged performances in each root to reality whatever is exaggerated in the writing and production — though much that seems exaggerated is actually straight reporting.

In the satirical On Becoming a God in Central Florida — set in 1992 in a place described as "Orlando adjacent" — Kirsten Dunst plays Krystal Stubbs, a woman whose husband, Travis (Alexander Skarsgard), has hitched his fortune, or lack of it, to FAM, a multilevel marketing company/scheme, along the lines of Amway and Herbalife. You may have encountered one of many media reports on these cultish pyramidal organizations, more likely to impoverish than enrich the "independent business owners" who make up their ranks.

At the top of this particular heap, composed mainly of anxious men — women are accessories — sits legendary distributor Obie Garbeau II (Ted Levine, in Mark Twain threads and mustache), selling his "downline" followers the dream of "an A-list six-star jet-set lifestyle." Obie, who also sells a line of motivational tapes ("Negative people are roadkill in your rearview mirror"), does not always seem exactly sure himself where the scam stops and the cult starts, but he is professionally invested in the maintaining an air of mysterious superiority.

"Our hearts will be free and open and we will own a helicopter," Travis, having embraced this idea to his obviously impending ruin, tells Krystal, who wants only not to be "poor again" and provide for their baby daughter. Krystal, who is not without ambition, works at Rebel Rapids, a water park managed by her doting neighbor Ernie (Mel Rodriguez) and owned by Stan (Usman Alley), who desires a better class of customer: "A little less Benett on, a little more Ralph Lauren. ... People who live in cul-de-sacs."

Created by Robert Funke and Matt Lusky — the first major credit for either — the series tells the familiar story of a person seeking compensation from a system that did her wrong: making enemies, gathering allies (some of whom also might be enemies), accruing power along the way. But it also wants to play some big cards about Who We Are Now, our national sense of entitlement and the implication that anything less than financial success is moral failure. It seems likely that Obie, a balding, bewigged narcissist who serves his guests Hamburger Helper and gets himself spray-tanned before public appearances, is meant to recall a certain sitting president. "God almighty made this great nation so you and your business could prosper," he tells the troops. "Success is in your blood, fella."

There's a lot of talent at work onscreen here, notably including musician Beth Ditto as Max's wife (and Krystal's confidant) Bets and Théodore Pellerin as Cody, a true-believer FAM recruiter with whom Krystal becomes involved. But what lifts the series to a higher level is Dunst. Becoming a God would likely be worth a look without her, but she makes it worth going out of your way for. Even when the writing goes to the edge of credibility, her performance remains real, recognizable and layered. Her Krystal is at once ordinary, powerful and a little perverse, and Dunst draws you into the character even as you step back and admire the actor. Watch it alongside her work in the 2016 season of Fargo, a show Becoming a God resembles temperamentally and thematically, and bow down.

Set in Clearwater, Fla., where creator Laura Chinn spent her (dropping out of) high school years, Pop TV's very funny Florida Girls is one of a number of recent regional comedies, not necessarily set in the best neighborhoods, including FX's Atlanta, Comedy Central's South Side and Detroiters and YouTube Premium's Champaign ILL and Wayne (Brockton, Mass.). Local color and customs, largely missing from television, attach the narrative, even when outlandish, to reality. (The first season of Florida Girls recently completed its broadcast run, but it's available to stream on the Pop website and app.)

It's easy enough to style it Girls with added Florida, or Sex and the City without a city, though its flavor is specifically its own. Its four heroines are lifelong friends, usually broke, but scraping by on luck, scheming and a little bit of honest work. Because this is a comedy about young people in 2019, there is weed. And alcohol. And LSD. And pills acquired through somebody's dead grandmother's old prescription. There is also, less usually, theft — petty and grand — fraud and vandalism, which somehow don't seem all that bad in context. (They are not the worst people we see.) Issues of class and race and sex are very much in the mix but approached from odd, ironic angles, with a lack of judging that some viewers might take as a lack of judgment. It is not, in the strictest terms, a responsible entertainment, though it is, somehow, a moral one.

Shelby (Chinn) wants to improve herself and get out of Florida, which Kaitlyn (Melanie Field), who is angry about that (and much else) thinks is "the raddest state in America." Jayla (Laci Mosley) is looking to "find a man before I'm old," and Erica (Patty Guggenheim) is an illiterate kleptomaniac protected from harm by an aura of innocence, like a young, stoned, female Stan Laurel. ("I thought I was going to stop stealing," Erica says, "but you know what? I like, it, I'm good at it and it doesn't hurt anybody.") Whether they are living the best version of a bad life or the worst version of a good one, they benefit from sometimes antagonistic, eventually reliable mutual support. It's a feel-good comedy with bad hangovers.

Shelby's routinely mocked desire for a new world must be managed in a way that won't pry her from her old one, both for the sake of the character and the show itself — just as her friends, who can be awful, also need to be admirable, laughable but not looked down on. Florida Girls manages this trick neatly because Chinn knows the territory because the performers are invested in the characters and because the characters are invested in each other. Their life is ridiculous and, in its cockeyed way, idyllic.

On Becoming a God in Central Florida

Both shows are TV MA