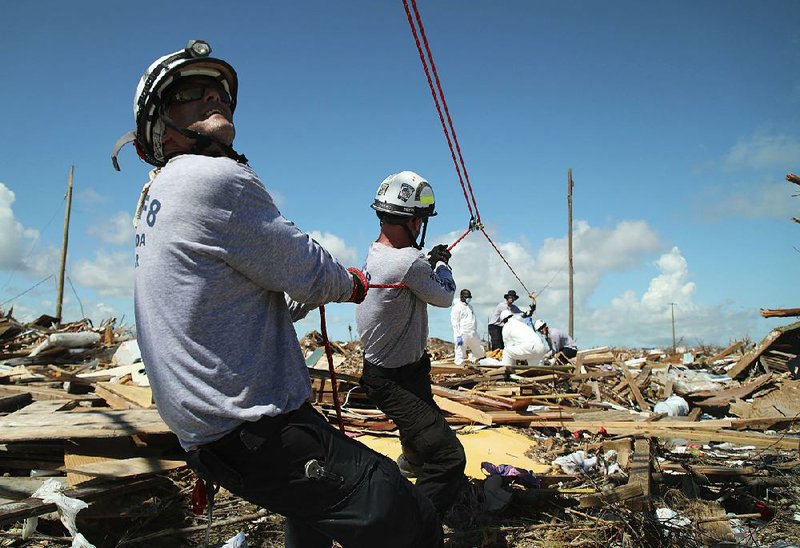 Members of a rescue team work Monday in the Marsh Harbor area of the Bahamas’ Abaco Islands, which was hit hard by Hurricane Dorian.

Hundreds of Hurricane Dorian survivors crowded into a ferry anchored in Freeport, Bahamas, on Sunday evening after days on the sweltering islands with limited food, water and power. Just 2½ hours across the ocean, safety and relief waited in Fort Lauderdale, Fla. Then, an announcement blared from the boat's intercom speakers.

"Please, all passengers that don't have a U.S. visa, please proceed to disembark," a crew member said in a video captured on board.

Since Dorian devastated the islands earlier this month, killing at least 44 people, hundreds of Bahamian refugees have reportedly come to the United States after going through a screening process with only a passport and proof of no criminal record. The more than 100 refugees forced to disembark Sunday night were baffled about why they were turned away.

"At the last minute like this, it's kind of disappointing," Renard Oliver, who held his infant daughter, told Brian Entin, a reporter for Miami TV station WSVN. "It's hurtful because I'm watching my daughter cry, but it is what it is."

U.S. Customs and Border Protection, however, says no rules have changed and laid the blame on the ferry operator, identified by local reporters as Balearia Caribbean, for not properly coordinating with government officials. Balearia Caribbean did not immediately return a request for comment.

"CBP was notified of a vessel preparing to embark an unknown number of passengers in Freeport and requested that the operator of the vessel coordinate with U.S. and Bahamian government officials in Nassau before departing The Bahamas," the agency said in a statement shared with The Washington Post late Sunday.

[Video not showing up above? Click here to watch » https://www.youtube.com/watch?v=0gdqH4YOKsY]

An agency official in Florida told WSVN that it was a "business decision" by Balearia to remove the refugees without visas.

"If those folks did stay on the boat and arrived, we would have processed them, vetted them and worked within our laws and protocols and done what we had to do to facilitate them," a Customs and Border Protection spokesman said. "They were not ordered off the boat by any U.S. government entity."

At a news conference Monday, acting U.S. Customs and Border Protection Commissioner Mark Morgan said there was "confusion" around the issue, but that the agency's policy hadn't changed: People fleeing the hurricane zone are welcome in the United States.

"This is a humanitarian mission," Morgan said. "If your life is in jeopardy and you're in the Bahamas ... you're going to be allowed to come to the United States, whether you have travel documents or not."

But, he added: "We're still going to go through the process... . We still need to vet you to make sure we're not letting dangerous people in."

On Saturday, nearly 1,500 refugees traveled to the United States on another cruise ship, reportedly without requiring visas. Entin reported that crew members on the Sunday ferry were told that the same rules were in effect before being rebuffed by the U.S. border agency.

The refugees' plight comes after bipartisan calls to waive all visa requirements for Bahamas survivors. On Wednesday, Republican Sens. Marco Rubio and Rick Scott, both of Florida, wrote an open letter to President Donald Trump urging him to allow in refugees with relatives in the United States. Eighteen other Florida lawmakers made a similar appeal.

On Monday, shortly before Morgan's news conference, Scott urged Customs and Border Protection officials and the Bahamian government to clarify the current visa rules. He also encouraged the agency "to work with the Bahamian government to set up a temporary site at their ports of entry. Professionals should be on site to help the many Bahamians trying to leave destruction."

On the same day, Trump told reporters that we "have to be very careful" in letting people from the Bahamas into the U.S., adding that "everybody needs totally proper documentation." The Bahamas has "some very bad people," he said.

Thousands have fled the islands after Dorian tore away roofs, flooded entire neighborhoods and left tens of thousands of people homeless. Most have gone to Florida, which has close historical ties to the Bahamas.

But many survivors seeking respite in Freeport on Sunday did not find it. Hundreds struggled to buy tickets on ferries and flights. Eventually, workers at the Freeport Harbour locked the terminal doors after all of the seats on the Sunday evening ferry had been sold. Many people continued to wait outside. Their homes had been flooded, power cut off, water contaminated. The boat to Fort Lauderdale promised to carry them to family members and friends waiting to provide support.

"This is terrible," one woman who stayed on the ferry told WSVN as the ferry left the harbor. 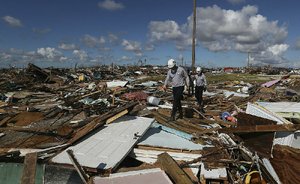 Photo by AP/FERNANDO LLANO
Rescuers from Gainesville, Fla., search for bodies Monday in the wreckage left by Hurricane Dorian in the Marsh Harbor area of the Bahamas’ Abaco Islands. The U.S. on Monday blamed a ferry operator for an incident in which more than 100 refugees who survived the hurricane were forced to disembark from a vessel in Freeport, Bahamas, because they didn’t have visas to enter the U.S. 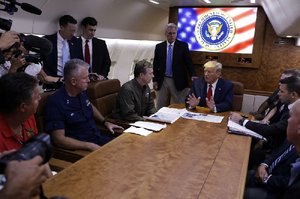