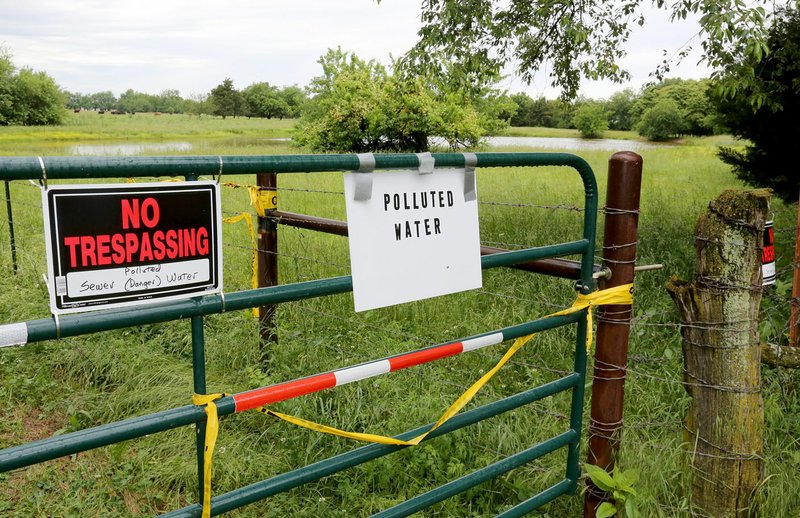 SPRINGDALE -- One of the families whose land borders the Bethel Heights wastewater treatment plants has asked Springdale to annex their property.

The City Council is expected to vote on the annexation tonight.

The Steele family has asked Springdale to annex 73 acres of pastureland on the south side of Bethel Heights and adjacent to North Thompson Street. They made the request under a state law that allows a property owner to annex into an adjacent city if the controlling city cannot provide services, but the adjacent city can.

Bethel Heights cannot provide the Steeles with sewer service, said Springdale City Attorney Ernest Cate. The family owns a contiguous 153 acres at the site, with the other 80 acres already within the Springdale city boundary.

The family requested Bethel Heights provide a 12-inch force main sewer line to serve the property as it's developed. Springdale Water Utilities currently serves the land with water, but not sewer service, said Joe Brooks, a spokesman for the family.

Joe Summerford, the Bethel Heights city attorney, told the Steeles in a letter the city can provide the service. Cate showed a copy 0f the letter Monday.

"But we all know they can't," Cate said.

An email sent Monday to Bethel Heights' mayor and a lawyer hired by the city to speak on its behalf about the wastewater plants, received no response.

The city's wastewater system consists of a septic tank-pumped sewage collection system. Wastewater is collected from the sewage system and sent to one of two treatment facilities. Large solids and wastes are removed, and the treated water runs through a series of pipes just below the ground on several acres. The treated water is slowly dripped to release it into soil just below the surface.

Documents from Environmental Quality record sewage surfacing in fields where the treatment system is buried as early as August 2013.

Al Drinkwater filed a complaint with the state department in February, contending wastewater from the Bethel Heights plants was being illegally dumped on neighboring properties, which included land owned by the Steeles and Lawrence Bowen. Bowen filed a similar complaint in 2017, and the state recorded an anonymous complaint in 2016. Drinkwater is a consultant working with the Steeles.

"The present condition and status of the Bethel Heights 'step system' is such that its sanitary sewer system is unable to serve present capacity and cannot be expected to provide the additional capacity necessary to provides sanitary sewer service for the intended and planned use on the property within the time provided ... thereby rendering Bethel Heights' written commitment to provide services untenable," reads the Springdale ordinance to annex the Steele land.

The Steele land is agricultural. Brooks said the family plans a mixed-use commercial, residential, office development on the property. The proposed path of the eastern extension of U.S. 612, a west to east bypass of Springdale, will bring development opportunities to the land, he said.

Rick Pulvirenti, chief operating officer and director of engineering for Springdale Water Utilities, said the utility already has sewer lines running in the area. The land owner would be responsible for the cost of laying pipe from their land to the main sewer lines.

Brooks and Cate expect Bethel Heights to block the annexation. Bethel Heights officials filed a petition for a hearing on its compliance with the Benton County Circuit Court on another annexation with similar circumstances, Cate said.

Both Brooks and Cate expect more Bethel Heights property owners to seek annexation into Springdale. The law allows any property contiguous to another city that can provide services to ask for annexation, Cate said.

"I think it will have a domino effect," Brooks said.

The Steeles made their demand for service from Bethel Heights in May, Brooks said. But city officials never picked up the registered letter with the request. The family hand-delivered the letter in June. Bethel Heights responded with a promise of service in July.