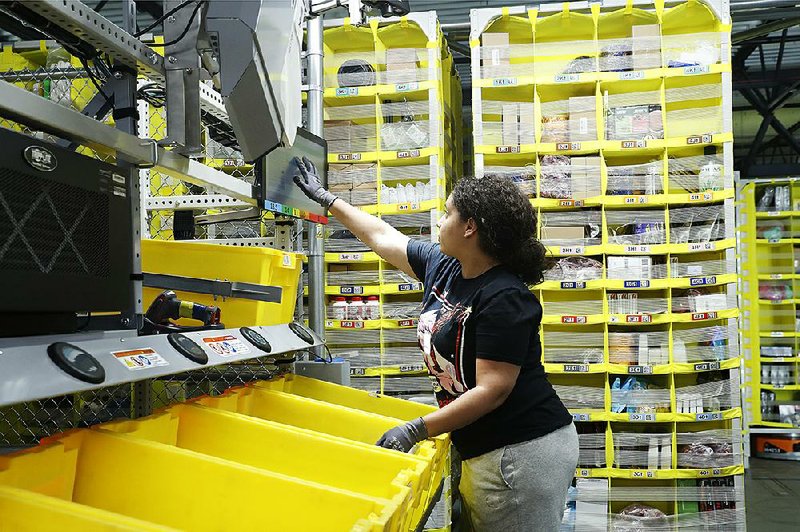 A worker sorts items and fulfills orders earlier this year at an Amazon facility in Staten Island, N.Y. The company, which has more than 650,000 workers worldwide, is the second-biggest U.S.-based private employer behind Walmart Inc.

NEW YORK -- Online shopping giant Amazon is holding job fairs across the country next week, aiming to hire more than 30,000 people by early next year, a 5% bump in its total workforce.

Amazon is looking for all kinds of workers, from software engineers who can earn more than $100,000 a year, to warehouse staff paid at least $15 an hour to pack and ship online orders. The company said all the positions are permanent full-time or part-time jobs that come with benefits. And the hirings are not related to the usual increase in hiring it does to prepare for the busy holiday shopping season.

The job fairs may be a necessity for Amazon. With unemployment near a 50-year low, workers have more options and employers need to work harder to fill empty positions.

Last fall, Amazon raised the minimum wage at its warehouses to $15 an hour, and this summer, it said it would spend $700 million to retrain about a third of its American workers to perform tasks that required advanced skills. The effort included a major push to improve the technical expertise of corporate and tech-focused employees, such as turning entry-level coders into data scientists.

In August, the national unemployment rate remained at 3.7%, even as hiring slowed in the face of the trade war between the United States and China and the lagging global economy.

Amazon said the hiring events will take place Sept. 17 in six locations where it thinks it can find the strongest talent: Arlington, Va., where it's building a second headquarters; Boston; Chicago; Dallas; Nashville, Tenn.; and its hometown of Seattle.

"I encourage anyone willing to think big and move fast to apply for a job with us," said Amazon chief executive officer and founder Jeff Bezos, in a statement to The Associated Press. "You'll get to invent and see Amazon making even bolder bets on behalf of our customers."

Amazon's job boards list many more openings in the Seattle area and California and by its new campus near Washington, D.C., than it does anywhere else.

The high number of job openings, which Amazon said is the most it's had at one time, shows how fast the company is growing. Started as an online bookstore more than two decades ago, Amazon now produces movies, makes voice-activated gadgets and has plans to send satellites into space to provide Internet service.

Amazon already has more than 650,000 employees worldwide, making it the second-biggest U.S.-based private employer behind Walmart Inc. And that number will likely rise: Amazon's second headquarters in Arlington is expected to employ 25,000 people in the next 12 years. The company is also moving into more industries, including health care and advertising.

Holding a nationwide job fair is unusual for a large company, said Mike Horrigan, president of the nonprofit W.E. Upjohn Institute for Employment Research. But he said it may be a good way for a company like Amazon, which needs to fill thousands of jobs in a tight job market, to quickly screen candidates with the right skills.

"This is a way to generate a lot of momentum and attention," said Horrigan. "It makes a lot of sense."

At the hiring events next week, Amazon said about 1,000 recruiters will help candidates apply for positions, prepare them for job interviews and give them more information on the roles.

As traditional retailers continue to close stores, and as antitrust concerns about big technology companies swirl in Washington, Amazon has increasingly used its growing workforce as a political tool. Amazon brings employees on tours of Congress, giving lawmakers protective vests emblazoned with the names of warehouses in their home states. The company also issues frequent reports and news releases like the announcement Monday about the jobs it has created.

Amazon has signaled to investors that it is entering a reinvestment cycle, where its costs will increase as it seeks to expand in strategic areas. In its latest earnings call with Wall Street analysts, the company highlighted the recent growth of the sales and marketing staffs for its cloud computing services and for the logistics and transportation networks it is building to make deliveries.

The 30,000 open positions do not herald one major new investment, as was the case two years ago when Amazon said it would search for a second headquarters to complement its home in Seattle, which has all but turned into a company town. Amazon said that adding the new headquarters would create 50,000 jobs.

Information for this article was contributed by Joseph Pisani of The Associated Press; and by Karen Weise of The New York Times.