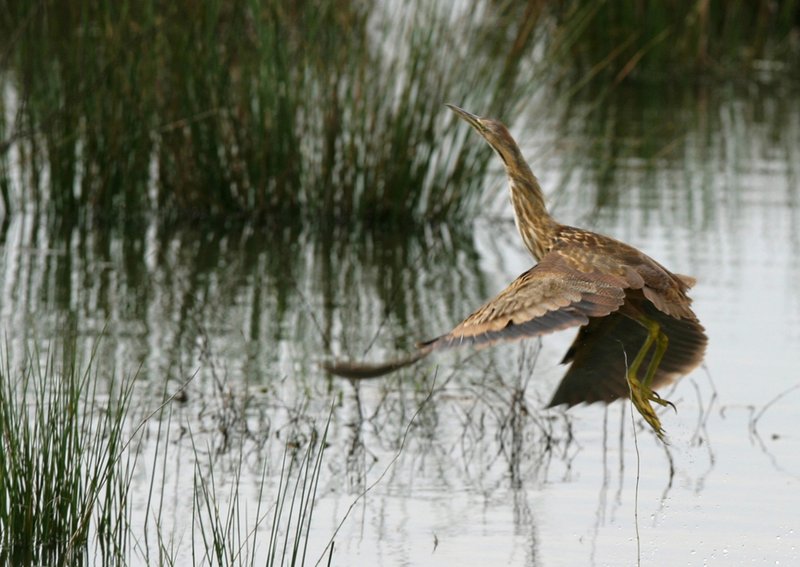 American bittern lifts away from reeds in the Wapanocca National Wildlife Refuge. (Special to the Democrat-Gazette/JERRY BUTLER)

Bird-watching is a pastime that can overlie other outdoor activities, for example, seeing an eagle catch a fish while you're boating, or watching a woodpecker carve a nesting hole while you're sitting on a deer stand. But "birders" are people who make it their specific intent to look for birds.

For birders, bird-watching is not just an add-on to a camping, fishing or hiking trip. Birders go places primarily to relish the search for birds.

There are lists ranking the best lakes to fish, the best white-water streams to float and trails to bike. How about a Top 8 list of the leading places to see birds in Arkansas?

A great place to look for such sites is eBird, an online checklist program that compiles bird sightings reported by recreational birders and ornithologists. Launched in 2002 by the Cornell Lab of Ornithology and the National Audubon Society, eBird provides a rich database, including how many species and individual birds have been seen or heard in specific places. The database provided most of the information for this analysis.

The state's No. 1 "Hotspot" for seeing birds is Bald Knob National Wildlife Refuge three miles east of U.S. 67 in White County. Among the rice fields, ponds, irrigation canals and reforested woodlands, 284 bird species have been spotted.

worms, crustaceans and aquatic plants. Rails, egrets and bitterns stalk among the rushes to catch frogs and crawfish. Eagles, hawks and harriers soar above, hoping to catch doves, coots or snakes unaware.

Red-winged blackbirds, perhaps the most abundant bird species seen in the refuge year-round, can be identified by their hump-backed posture as they perch on power lines or by the flight pattern of their massive flocks as they stream along the horizon.

Pro tip: You don't need binoculars to observe many birds from a slow-moving car on the gravel and dirt roads that interlace the refuge. If you stop to get out for a closer look, the birds might fly away. Drive with the window down and the radio off, at a snail's pace, and if you must get out to take a picture or let the driver see, exit slowly, leaving the car door ajar or, if it chimes, close it softly.

For birds at a greater distance, park, walk atop the levees and use your binoculars or spotting scope to look closely for movement at the water's edge.

Bonus: Henry Gray Hurricane Lake Wildlife Management Area is only four miles away in the White River basin. High water some springs and winters cuts off the area, but when you can get there, it's worth going. It's a slightly different habitat with more trees providing richer opportunities to see warblers, woodpeckers and other woodland species.

Adding Hurricane's bird species to the 284 species reported at Bald Knob, White County gives you the opportunity to see 314 species in a relatively small area.

Holla Bend National Wildlife Refuge is a 7,055-acre tract on a long bend of the Arkansas River five miles downstream from Dardanelle in Pope County. Its northern boundary is a navigable portion of the Arkansas, but it is bounded on all the other sides by oxbow lakes and sloughs left behind in the 1950s when the Corps of Engineers changed the river's course with jetties and dredging.

The fertile, sandy soil of Holla Bend supports a diverse plant and insect biosphere in prairie and wetland habitats that attract 278 species of birds.

Access is easy. The day-use fee is $4 per vehicle. Regulations about driving, hunting and fishing are at fws.gov/refuge/Holla_Bend and posted on a kiosk at the west entrance off Arkansas 155.

Roads are well-maintained. A wildlife observation tower in the southeast quadrant looks over tall vegetation and into an oxbow lake that holds ducks, in season. Walking trails are the best routes to see woodland birds.

Holla Bend hosts thousands of snow geese and greater white-fronted geese each winter, bobolinks in early spring, painted buntings in the summer, and in the late fall, 23 sparrow species. Bobwhites, bald eagles and wild turkey are seen there year-round. I have gotten good looks at woodcocks, Harris sparrows and American tree sparrows only at Holla Bend and nowhere else in Arkansas.

Once on a field trip there with an Audubon group, we marched across a sage grass field to flush up a short-eared owl, the only time I have seen the species in the Natural State.

eBird reports that 274 species of birds have been seen at Wapanocca National Wildlife Refuge, a sanctuary for migratory waterfowl near Turrell in Crittenden County. The 5,484-acre refuge is an island of forest in a sea of agriculture. Lying only 4 miles west of the Mississippi River and 15 miles northwest of Memphis, the refuge is an important stopover for waterfowl traveling the Mississippi Flyway and for songbirds as they migrate to and from Central and South America.

Birding at Wapanocca is facilitated by raised levees and bridges that cross creeks and bayous. From these structures, birders can view high into the understory of trees. You could see as many as 28 species of warblers during migration.

eBird bar-graph data for the refuge seems to indicate that some warblers are better seen in the fall than in the spring, a reverse of the usual pattern. I spied the only golden-winged warbler I have ever seen on a bridge in September 2013.

But on two visits during high water, it was difficult to get to the banks of the lake and birding was less successful. Keep an eye on the rainfall levels if you are visiting Wapanocca.

Even if the area is flooded, check for horned larks in the stubble of cotton fields nearby -- always a treat.

Being close to Memphis, Wapanocca seems to attract more birders from out of state than Bald Knob or Holla Bend. The eBird list of birders who posted at Wapanocca is heavily weighted by people who also posted for Ensley Bottoms, Tennessee's birding hotspot in Shelby County. The number of bird species is comparable to the counts at Holla Bend and Bald Knob, but fewer checklists indicate that Wapanocca is not visited so often.

With 268 bird species being reported by eBird, Charlie Craig Fish Hatchery can be considered the fourth-best birding location in Arkansas, and the No. 1 location for species per acre, with a ratio of 5:1. Though the facility exists to propagate fish, it's a robust place to view and study birds, too.

[RELATED: Free-ranging birds are found all over]

The Arkansas Audubon Society has designated the hatchery an Important Bird Area, in part, because it provides shallow-water mud flats to migrating shorebirds that have little other suitable habitats nearby. Audubon's website touts the hatchery as "a popular place for birdwatchers" that "is by far the most visited site by birders in northwestern Arkansas." Located at 977 W. Fish Hatchery Road outside Centerton, the area consists of shallow fish ponds surrounded by pasture and suburban development. It is relatively treeless and, except for a low hill to the west, flat. It is owned by the Arkansas Game & Fish Commission.

Bird watching at the hatchery involves no driving, and due to its relative smallness (only 58 acres) there is little walking. I got my best view of birds by sitting still in the covered pavilion, peering through the free and permanently mounted spotting scope, and listening for the songs and sounds of birds. On that day I saw both pectoral and least sandpipers and five semipalmated plovers, but I did not see the much rarer piping plover, which had been reported a few days earlier.

Many of the state's best-trained bird scientists and skilled birders live nearby. Some are associated with the University of Arkansas' life science programs and have taken special interest in the site and nearby Lake Fayetteville. They have developed a well-documented birding checklist that describes in great detail and accuracy when migrants arrive and depart. So, a birder hoping to see a whimbrel at Craig's fish hatchery, for example, could learn that the best chance to see one is the third week of May.

Three hotspots in eBird's database all are in Faulkner County, adjacent to one another and can be conveniently traversed in a single day of birding: Bell Slough WMA, Lake Conway and Camp Robinson Special Use Area.

All three are north of Interstate 40 near Mayflower. All three are best birded by driving a car to a parking lot and then walking on trails. Collectively, they offer diverse habitats: woodlands, marshes, fields and an expansive body of water. They harbor about 260 species of birds.

• The parking lot for Bell Slough Wildlife Management Area is where Palarm Creek passes beneath Grassy Lake Road. From the lot, take the Kenny Vernon Walking trail through mashes and woodlands to see night-herons, tanagers, flycatchers and warblers in season and wood ducks.

You'll need binoculars and a keen eye all the time because of the thick foliage. Wear watertight boots except in the driest parts of the year, and be sure to use insect repellent. The Audubon Society of Central Arkansas takes field trips to Bell Slough each spring that anyone can attend for free. On those trips, you can be assisted by people who look for birds in that area almost weekly. Check the website wp.ascabird.org for details.

• Lake Conway is a large impoundment of water created in the 1950s when the Game and Fish Commission dammed Palarm Creek. It is best accessed for birding by car at the southeast end of Dam Road off Arkansas 89. This is the deepest part of the lake, and at the parking lot below the dam, kingfishers and ring-billed gulls can usually be seen. Bald eagles cruise by in winter, and an osprey has nested in a tall cypress northeastwardly across the lake from the dam for years. A black-legged kittiwake (a bird that is normally off the coast of Maine) was seen near the dam for more than a month one Christmas season.

• Go east on 89 from Mayflower for two miles past the Lake Conway bridge to find the Camp Robinson Special Use Area parking lot. On this site alone, 207 species of birds have been seen. Among them is the Bachman's sparrow, five kinds of swallows, kinglets and three kinds of vireos. Scrub oaks and brushy fields here hold meadowlarks, phoebes and jays. Notably, this may be one of the few places in Arkansas where quail might reasonably be considered abundant. See agfc.com/en/zone-map/669/.

Jerry Butler writes about Arkansas birds and the people who enjoy them. He welcomes comments at

Print Headline: Where the birds are: These 8 sites are the state’s hottest hotspots for bird-watching