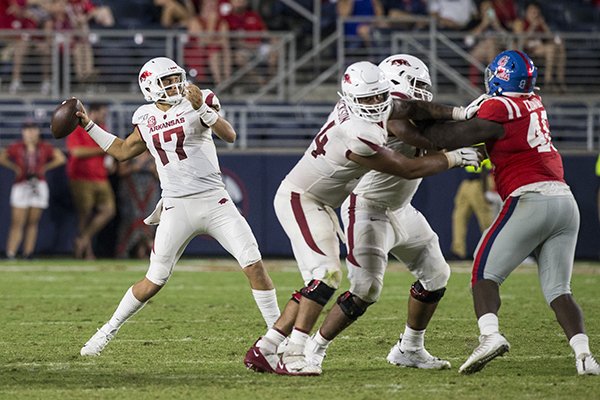 Arkansas quarterback Nick Starkel (17) throws a pass during a game against Ole Miss on Saturday, Sept. 7, 2019, in Oxford, Miss. - Photo by Ben Goff

FAYETTEVILLE — Arkansas will start its second quarterback in three weeks Saturday when it hosts Colorado State.

Starkel started and played the entire second half against the Rebels, replacing starter Ben Hicks after Hicks completed 7 of 16 passes for 98 yards prior to halftime.

Starkel completed 17 of 24 second-half passes, including nine of his first 11 and final seven, for 201 yards and a touchdown to receiver Koilan Jackson - the first of his career - in the loss. He became the first Arkansas quarterback to pass for 200-plus yards in a game since Ty Storey threw for 200 against LSU in 2018.

Through two games, Starkel holds a passer efficiency rating of 149.0, according to SportsReference. Hicks sits at 91.7. Starkel has completed as many passes as Hicks (21) on 16 fewer attempts.

Colorado State will mark the sixth start of Starkel’s career and first since his freshman season at Texas A&M.