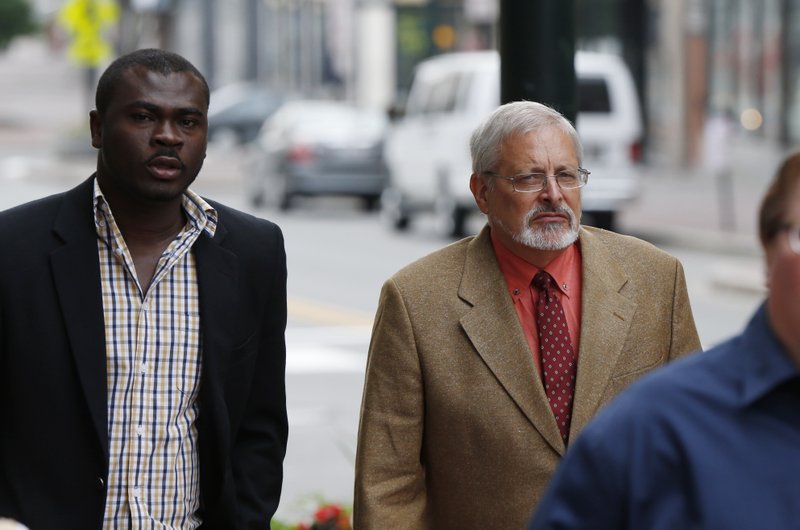 FILE - In this July 9, 2015, file photo, Michael Geilenfeld, right, arrives at U.S. Bankruptcy Court, Thursday, July 9, 2015, in Portland, Maine. An attorney says a defamation lawsuit against a Maine activist who accused an orphanage founder in Haiti of being a serial pedophile has been settled. Paul Kendrick&#x2019;s attorney told The Associated Press that the defendant&#x2019;s insurance companies agreed to pay $3 million to Hearts With Haiti but nothing to orphanage founder Michael Geilenfeld. The attorney says Hearts With Haiti and Geilenfeld dropped their defamation claims. (AP Photo/Robert F. Bukaty, File)

PORTLAND, Maine -- A defamation lawsuit against an activist who accused an orphanage founder in Haiti of being a serial pedophile has been settled, ending a lawsuit that has lasted six years, an attorney said.

The settlement ends a case that has dragged on since 2013. Kendrick said the effort was worth it because he believes children are now safer.

Kendrick, who stands by his claims against Geilenfeld, said he's satisfied because the lawsuit aired the accusations and because Geilenfeld gets nothing from the settlement. The money will be used by the charity to help disabled children in Haiti, he said.

"It does not mean the brave victims coming forward have done so in vain," Kendrick said. "The testimonies in evidence against Geilenfeld belong in a criminal investigation."

Attorneys who represented Hearts With Haiti and Geilenfeld didn't immediately return calls and emails seeking comment. The whereabouts of Geilenfeld, a U.S. citizen, are unknown. The former Catholic brother previously testified that the abuse allegations were "vicious, vile lies."

Kendrick said he has spoken to 16 young men who have claimed Geilenfeld abused them in Port-au-Prince years ago, when they were boys. Geilenfeld founded the St. Joseph's Home for Boys in Port-Au-Prince in 1985.

In 2015, a federal jury awarded $14.5 million to Geilenfeld and Hearts with Haiti, despite testimony from seven men who said they were sexually abused as boys. The case was refiled in state court after a U.S. appeals court ruled that a federal courtroom in Maine was the wrong jurisdiction.

Kendrick of Freeport, Maine, became an outspoken voice during the New England church abuse scandal and co-founded the Maine chapter of the Voice of the Faithful. He said he began investigating Geilenfeld after hearing from men who said they had been victimized by him in Haiti.

If the lawsuit had gone before another jury, Kendrick said there would have been more victims willing to testify.

Randall said Geilenfeld's willingness to drop the defamation claim paved the way to the settlement and the lawsuit being withdrawn. He said it's a victory for the children who benefit from the settlement -- and for Kendrick because claims of wrongdoing have been dropped.

"The end result is that children are safer," he said. The victim's allegations are now in the hands of law enforcement officials, he said.