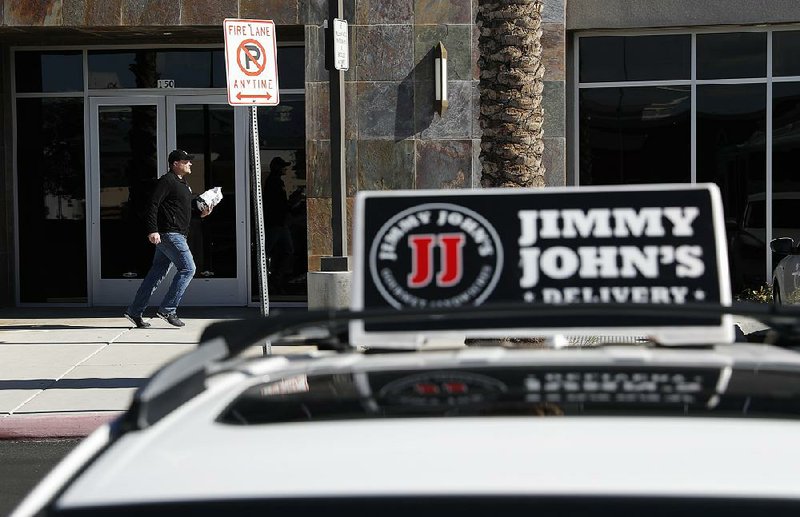 Tyler Schwecke, a driver for Jimmy John’s, makes a delivery earlier this year in Las Vegas.

DETROIT -- In the age of Uber Eats and GrubHub, delivering pizza for the local Domino's seems like a throwback, but for drivers who want more predictable hours and pay -- and discounts on food -- restaurants may be the better bet.

Despite pressure from third-party apps, a few big chains continue to use their own drivers, and they're hiring.

Panera Bread, which has 10,000 drivers in the U.S., expects to hire more after a deal it signed late last month with GrubHub, Uber Eats and DoorDash. The apps will let users place orders, but Panera's drivers will deliver the food. Domino's, which has around 120,000 drivers in the U.S., plans to build 2,000 more stores over the next eight years. Each Domino's location employs around 20-25 drivers. Jimmy John's also hires its own drivers.

Pay is similar whether drivers work for an app or for a restaurant. The companies won't reveal that data, which varies by city and even by restaurant within a city. But according to driver reviews on the employment website Indeed.com, U.S. drivers for GrubHub earn an average of $13.85 per hour, while Domino's drivers make $13.40 per hour and Panera workers make $13.68 per hour. That includes tips.

But there's a critical difference: Restaurant workers get paid even when they aren't making deliveries. At Panera, for example, delivery drivers clean tables, prepare food or wash dishes while they're waiting for orders. During that time, they get paid a higher in-store wage than the $5 per hour plus tips and mileage reimbursement that they might make while driving.

Uber Eats sometimes offers a guaranteed hourly rate -- during weekend promotions, for example -- but only for workers who make a certain number of trips per hour. GrubHub offers minimum hourly pay in some markets but not in others.

Tracey Diamond, an attorney who specializes in employment law, says restaurant delivery workers also have more legal protections because they are considered employees, not independent contractors.

Late last year, for example, Domino's drivers in Ohio successfully sued franchise owners because they were being paid less than the government's baseline mileage reimbursement rates. Independent contractors wouldn't have that legal recourse, and they're not reimbursed for gas or vehicle maintenance.

Restaurants say they also offer training and advancement opportunities that third parties can't match. Domino's says around 90% of its franchisees started out working in its stores, most as delivery drivers. Some of its current drivers even work full time and are eligible for health benefits.

"There is a big push to not treat them as 'just drivers.' They are team associates, and they can work their way up within the cafe," said Dan Wegiel, Panera's chief growth and strategy officer. "Many of our drivers come from third-party apps. They're looking for something they can't find there."

Zach Rothstein works between 32 and 40 hours a week as a Domino's delivery driver in Fayetteville, N.C. He likes the stability and the feeling of being part of a team with goals, like ensuring good online reviews. He cuts pizzas and prepares boxes while he's waiting for an order. At closing time, he helps clean the store. On a good day, Rothstein said he makes $14 to $17 per hour, but usually he makes closer to $8.25.

Restaurant delivery jobs aren't for everyone. Ziah Goodrow drives for both GrubHub and DoorDash in Woodinville, Wash. Flexible hours are important to her because she likes to travel to play the mobile game Ingress. She also has health issues that cause leg pain if she stands still for too long.

Goodrow says she typically earns $20 to $25 per hour with GrubHub but less than $15 per hour with DoorDash. She notes that those are before-tax rates. Because she's an independent contractor, GrubHub and DoorDash don't withhold taxes from her pay. She pays her taxes once a year in a lump sum instead.

There are also fewer restaurant jobs available. DoorDash has more than 700,000 drivers in 4,000 cities in the U.S. and Canada, while GrubHub has 65,000 drivers in 300 U.S. cities. Goodrow said she looked into working for Domino's when she started delivery driving but there were no openings.

U.S. restaurant delivery orders jumped 10.5% to 2 billion between May 2016 and May 2019 as third-party apps like GrubHub partnered with thousands of restaurants.