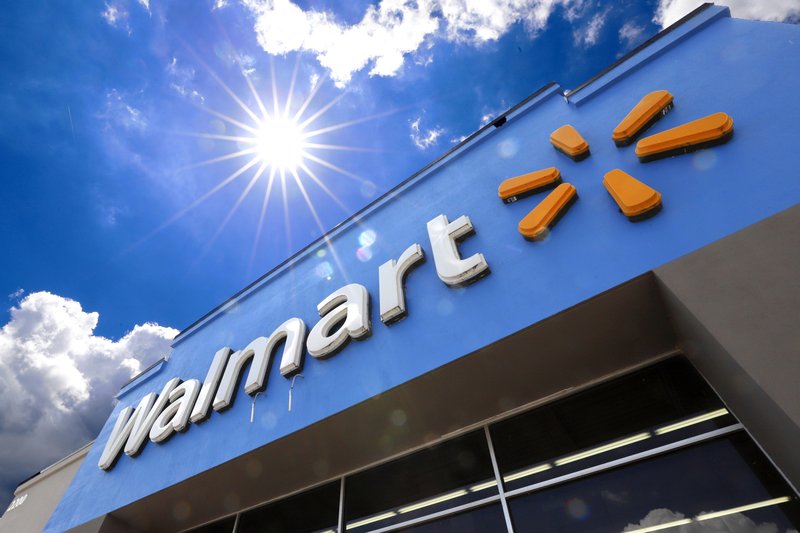 FILE - This June 25, 2019, file photo shows the entrance to a Walmart in Pittsburgh. A lawsuit filed earlier this week by Walmart over fires in rooftop solar panels made by Tesla Inc. has been sealed by the court, and both sides say they look forward to addressing all issues. In joint statements Friday, Aug. 23, the companies say they look forward to re-activating the panels once both sides are certain that all concerns have been addressed.(AP Photo/Gene J. Puskar, File)

"It's clear to us that the status quo is unacceptable."

Those are the words of Doug McMillon, president and CEO of a Bentonville-based bastion of elitism known as Walmart. That's at least what the National Rifle Association would have people believe. We can't quite get there.

Walmart’s announcement of policy changes regarding guns is a wise step for the retailer, despite the NRA’s protests.

The NRA put the Arkansas retailer in its sights last week because the company dared to think for itself. Walmart announced it was changing policies on guns, the god of the NRA. In response, the NRA suggested "lines at Walmart will soon be replaced by lines at other retailers who are more supportive of America's fundamental freedoms."

One of the problems with the NRA is it finds its strongest voice when it's attacking American business or citizens who do not kowtow to the idolatry of guns. The organization is far more comfortable condemning a successful American retailer that steps outside the NRA's construct of a gun-gripping culture than it is reviling the murderous actions of mass shooters. The NRA is so single-minded, so beyond being part of the solution, it often appears content to let the violence rage as long as the gun sales continue to ring at registers.

The United States' culture of guns hit Walmart hard in early August. McMillon, in recounting events preceding the company's announcement last week, recalled events at an El Paso, Texas, Walmart store in which "a gunman with an assault-style rifle launched a hate-filled attack in our store, shooting 48 people resulting in the loss of 22 innocent lives."

A horrific event like that, and so many more before and after it, naturally lead a reasonable company and its chief executive to conclude the status quo simply will not do.

Walmart announced it would stop selling ammunition that can be used in the style of guns popular with mass shooters. McMillon said the company will ask its customers to cease the open carry of firearms within its stores, even in states where carrying a gun in a visible manner is legal. McMillon went further, calling on Congress to increase background checks on gun buyers and to debate the merits of a new ban on so-called assault rifles.

"As we've seen before, these horrific events occur and then the spotlight fades," McMillon said in a statement. "We should not allow that to happen. Congress and the administration should act."

The NRA did what the NRA predictably does: It decried Walmart's decision, practically declaring the company unAmerican and predicting -- hoping -- the Bentonville-based retailer will lose customers.

But can Walmart really be blamed? Having one of its own stores' customers shot up made casual indifference an impossibility.

Let's remember, too, that Walmart is free to do as it pleases. The Second Amendment, even read in a way most favorable to unencumbered gun sales, doesn't restrict private businesses. It declares a right of the people that shall not be infringed by the federal government. Exactly what that right entails is a subject of deep controversy.

If the NRA is an organization claiming to celebrate American freedom, it at least has to recognize Walmart's decision as the company's fundamental right. The company is free to do as it wishes when it comes to what it sells and what behaviors it will tolerate on its properties. The policy change does not violate the Second Amendment. Walmart is a private enterprise making a decision its leaders consider best for its future, its employees and its customers.

Walmart isn't in the business of trying to dictate gun regulations or rules. We suspect the retailer would rather Congress find a way to develop productive answers to the question looming large over 21st century American politics: How do we stop the killing? But the continuing bloodshed eventually makes inaction an impractical response. Whether Congress acts or not, it's entirely reasonable for private companies to make adjustments they hope will reduce the murderous culture of the United States -- at least their part of it.

Maybe private enterprise will figure out a way to discourage violence if Congress is content to play dead on the issue.

One aspect of Walmart's decision we appreciate is its moderation. Walmart recognizes a rational place for guns in American society. The company, McMillon said, will focus its gun business on supplying rifles and ammunition for hunters.

"We have a long heritage as a company of serving responsible hunters and sportsmen and women, and we're going to continue doing so," he said.

The policy respects what we anticipate a lot of Walmart's customers believe: The answer will be found by not treating every weapon the same under the Second Amendment or through anti-gun advocates' misguided thinking that every firearm owner is somehow to blame for mass shootings.

Walmart's perspective on open carry of guns is also welcome. Carrying a gun openly should never be restricted so much that a rancher in Montana violates the law by keeping a firearm handy on the range. But openly carrying in most every urban settings is unnecessary and unwise. It's mostly done by gun advocates trying to tweak the noses of those who don't like guns.

The NRA's approach, so loud and immovable in its promotion of guns, too often puts the organization on the side of relative silence when mass shootings happen. If it wants to advocate for a liberal reading of the Second Amendment, so be it, but with each tragedy, the organization seems to drift farther and farther away from an American public unwilling to sacrifice more lives to the firearms industry's unquenchable appetite for sales.

We'll never join those who press for a gun-free America, but the people of this nation cannot accept the all-or-nothing false choice that Congress and the NRA appear to embrace.

Walmart knows a problem ignored can have serious costs. It's one thing when that's measured in dollars and cents. It's altogether different when it's measured in lives.

But we understand the NRA's uneasiness. Rest assured, they're in our thoughts and prayers.