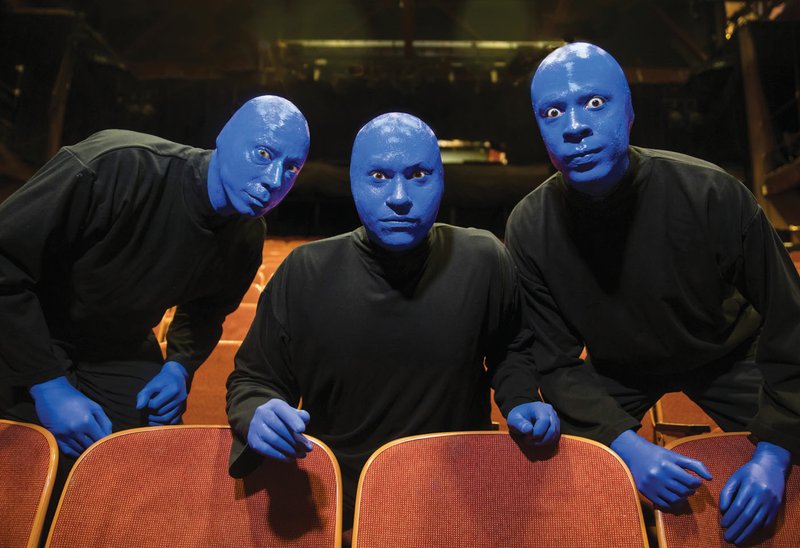 Three inquisitive, hilarious, rocking men with bald heads and blue skin have been thrilling audiences across the world for more than 30 years. The international phenomenon known as the Blue Man Group re-creates the sensation Sept. 12 with the debut of the group's first all new show in years, developed in residency at the Walton Arts Center.

Updates have been consistently integrated into the long-running shows and tours, explains creative director Jon Knight. But "Speechless," the first Blue Man Group North American tour since 2016, is the most new work developed for the brand in a very long time.

FYI — Preview performances will take place at 7 p.m. Sept 10 & 11 for the chance to see the show before it is finalized and premieres to the general public.

The Walton Arts Center’s semi-annual young professionals event returns with a first look at the Blue Man Group’s new production. SEEK (Savor, Enrich, Explore and Know) provides unique opportunities for young professionals and college students to engage with the arts. The events often comprise a pre-show hangout/networking event, tickets to a show and an afterparty with craft beer and entertainment. On Sept. 10, SEEK ticketholders have the chance to be part of the first-ever audience to experience Blue Man Group’s new show “Speechless,” and can hang out after the show for beer, prizes and maybe even a few surprises.

"One of the things that Blue Man has always considered as part of the work that we make is humanity's relationship to culture, humanity's relationship to one another and how technology can either get in the way of that or be an aid to that," Knight shares. The new "Speechless" production allowed veteran creatives to collaborate with new talent to dig deeper into some of the themes previous shows may have only scratched the surface of.

"Another thing that has been a big part of our consideration has been information overload," Knight says. "And lastly, ways in which things that are familiar, when turned just slightly, can become something that is new and exciting and a little bit alien."

That concept could almost serve as the premise for the new production itself. The Blue Men are beloved characters who have come to be known as much for the relationship they build with audiences as they are for their assembled instruments and tools. So while recognizable elements of the Blue Man Group brand may tie the show to earlier incarnations, members of the creative team are unanimous in their assertion that "Speechless" is completely different from any other Blue Man experience -- not to mention, unlike anything the new staffers have participated in before.

"In some cases it would be like the director comes in, the thing's already made, just put the show up. And this has been truly opposite of that for all of us in every way possible," director Jenny Koons enthuses of the collaborative process.

The Blue Men's "mantra phrase is 'three as one' -- that it takes all three of them to do the thing," she continues, "and as the show goes on, you want to constantly know that it takes all three to make a beautiful thing. In so many ways, that value, that mantra, has woven its way through how the show is being made. The idea of having all of these designers able to say, 'Hey, can I plug into that? Can you do that? Could we do this?' is actually very unusual, very unique."

Emmy Award-winning set designer Jason Ardizzone-West confesses his process usually begins alone in his studio making things, then at some point, the lighting designer, video designer and sound designer all come on board. His first experience with Blue Man, he reveals, is the most integrated design he's ever worked on.

"You don't experience the set until all of the systems are running and you see how the video interacts with the space and how the lighting interacts with the video and the sound," Ardizzone-West demonstrates. "One does not fully experience the design until everything's plugged in because it's a very functional machine. The whole space is an instrument the Blue Men play."

"Speechless" takes viewers into the Blue Men's workshop. The show investigates actually seeing the Men in their creative space. In the same way the Blue Men have always devised instruments and invented new sounds, this production feels like "the 2019 version" of that, Koons says. And much of the design and many of the ways in which the instruments "talk" to each other have never been done before.

"It's very rare to work on something where so many new elements are involved," Koons says proudly. "That feels like a beautiful evolution, while also figuring out how to support the story at every turn."

Looking back on the history of the show, Knight recalls how the very first Blue Man Group didn't even have moving lights. Now, the power of computers has allowed the creative team to explore concepts and effects they might have envisioned in the past but were technologically incapable of producing.

"There's a lot that maybe an audience won't realize is actually controlled by the guys on stage," offers lighting designer Jennifer Schriever.

When a Blue Man hits an instrument and the lights change, the connection of the drum stick hitting the drum is what controls that, not a crew member timing a button push. The designers have dug deep into constructing a set and instruments that are like living objects, Schriever shares.

"There are times in the performance where they plug something in and a chain reaction happens, and it's the action of the performer that is creating what's happening on stage. Nobody's hands are on any buttons," Schriever goes on. "And it's pretty exciting if you allow yourself to realize the magic is in how we set it up for them, and they're able to create whatever music or lighting or world they want to create within that."

That living lighting is built into every nook and cranny -- to the point that Ardizzone-West is proudest of the blurred boundaries within the set. The holistic relationship between the set, the lighting and the video projection is so inherent to the piece that the hope is it feels like it's all coming from the Blue Men as they create it in real time.

"One thing that makes the show interesting is the variety of ways in which we use the video surfaces," explains projection designer Lucy MacKinnon. "There are times when we use the video surfaces like little TVs -- each individual monitor has a different piece of content playing on it. Other times, we're working with textures that go broadly across the stage, a lot of flashing and strobe effects, which look very similar to what lighting can do with their instruments. What we do kind of walks the line between scenery and lighting.

"We're doing a lot of visualizations of sound," she adds. "The sounds the audience can hear and even feel in their seats, we're trying to create a series of visuals that really link up with and bring those things out."

The technical elements are all impressive individually and as they work cohesively, but the core of the show is still the Men and their connection with the audience, Knight asserts.

"Our hope is to focus on the story, to focus on the character and how their interaction with the audience is metered out over the course of the show. If that lands, then we're in great shape. and then on top of that, we want to make something beautiful. And that is the spectacle part."

"We've been really conscious in the creation of this to make sure that there's a way in -- an invitation for everyone," Koons says.

"I hope it's an event that is unique to that evening, will never be the same again, that truly is something that connects you to people live in a room that's more than being on your couch," she muses. "I feel like in this moment, it's very easy for all of us to have amazing stories told to us at home. Something like this is exciting because it's 2,000 people, live. And there are so many elements of the show that will be different every night depending on the crowd that's there. And that risk and excitement feels really great." 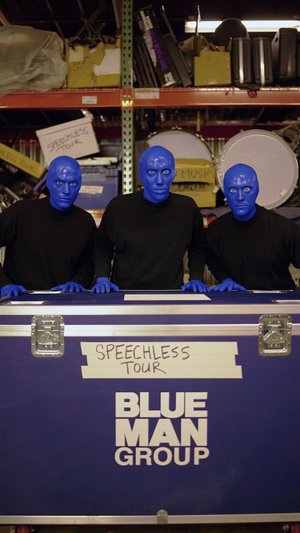 Courtesy photo From Fayetteville, "Speechless" will embark on a 50-city tour in its first season. The show marks the 11th time the Walton Arts Center has helped to officially launch a national tour from the venue since 1997, including previously hosting the Blue Man Group for their tech process during the launch of their 2010 tour. 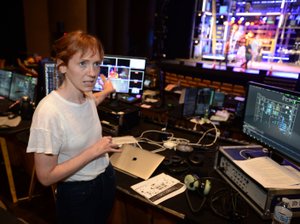 NWA Democrat-Gazette/ANDY SHUPE Projection designer Lucy MacKinnon explains the many pieces of her work station during technical rehearsals for the new Blue Man Group show "Speechless" at the Walton Arts Center. From her station, MacKinnon monitors animations that sync with the music in the show, all the live camera feeds -- two handheld cameras and three stationary cameras mounted in the set -- and lighting cues and generative effects. 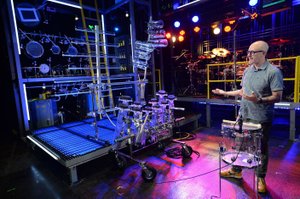 NWA Democrat-Gazette/ANDY SHUPE Blue Man Group's new show "Speechless" has been in technical rehearsals at the WAC since mid-August. Following production in New York, the show company relocated to Fayetteville to finalize all performance elements and fully "mount" the show through technical rehearsals. Creative director Jon Knight discusses the new set for "Speechless" during a press preview visit in August. 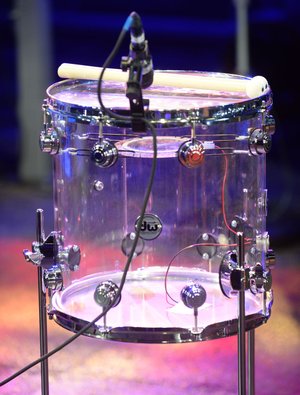 NWA Democrat-Gazette/ANDY SHUPE "It's the action of the performer that is creating what's happening on stage. Nobody's hands are on any buttons," lighting designer Jennifer Schriever explains of the new show. 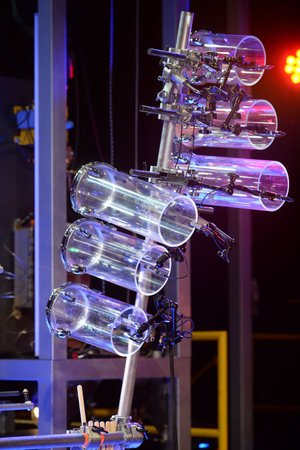 NWA Democrat-Gazette/ANDY SHUPE "Percussion has always been part of Blue Man's language," Knight says. "We really wanted to push into some new musical territory. We wanted to reengage with the character in our very present time." 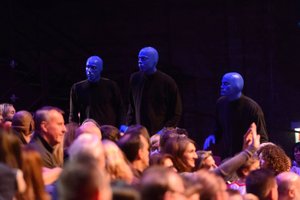 Photo courtesy: Daniel Boczarski "There are some pieces in our shows that sound a chord so innately with human beings that those pieces just stay," Knight reflects. "Those are pieces that I feel like really represent the character well -- they help to create the initial bond between the audience and the character and allow some trust to happen so that when the character engages with the audience, they get responses, which is always our hope."

Print Headline: Back In Blue