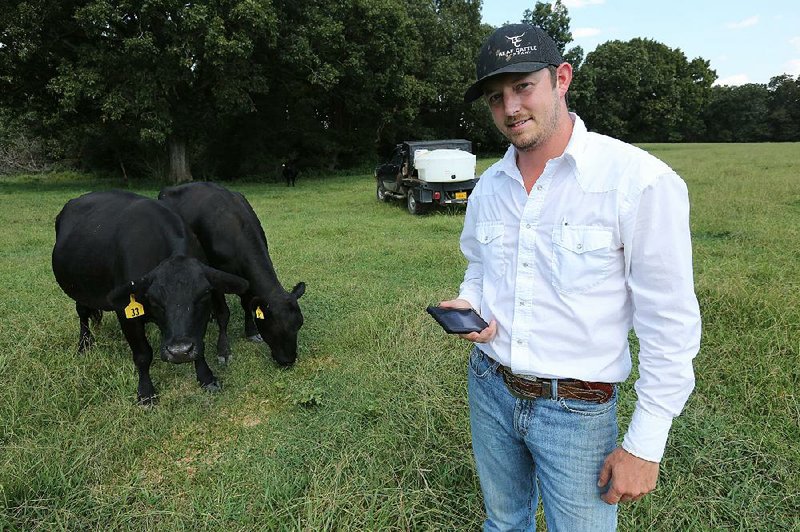 Rancher and Open Range app developer Tyler Beaver stands near a couple of his Black Angus cattle last week on leased property in Fayetteville. The Open Range app was designed to connect farmers and ranchers who wish to buy or sell livestock and farm equipment.

FAYETTEVILLE -- Farmers irritated by repeated trips to "Facebook jail" for trying to buy or sell livestock on the social media platform have been searching for online options to post their interest in the trade of goats, chickens and cows.

Tyler Beaver, a rancher who lives in Fayetteville, said in years past he sold most of his cattle online via his Facebook profile page and in various Facebook groups.

But Facebook recently tightened the enforcement of its rules, leaving Beaver and others in a bind. If they don't follow Facebook's rules, they run the risk of having their pages and groups, which could have thousands of followers, locked or shut down.

To solve the problem, he did what many millennials have done, he developed an app. Earlier this year, Beaver launched Open Range, a social media app designed for farmers and ranchers, in response to Facebook's crackdown.

With Open Range, users can comment, message, post photos and connect with others to buy and sell livestock and equipment cost-free.

Since the crackdown, Beaver said, "I get anywhere from a couple hundred to 1,000 downloads a day."

Facebook policies forbidding animal sales in groups and on the platform's marketplace application have been in place for years, but are only recently being enforced. Many farmers get around the rules by selling in groups dedicated to livestock or by running official business pages, where they can pay to advertise their animals.

But in April, Facebook banned all attempts by private individuals to sell live animals, with the exception of sales posted by retailers, animal re-homing, adoption agencies and shelters. The rules also apply to Instagram.

"It went from being somewhat regulated to an extreme regulation," Beaver said.

People have also turned to MeWe, a similar online social media app, to meet with others to sell livestock and animals. But Katie Finefield, a central Arkansas goat farmer, said she prefers Open Range.

"I visit every once in a while to see who's been added," she said.

While Finefield, member-at-large for the Arkansas Goat Producers Association, has not experienced trouble with her Facebook account, she said a lot of her friends have.

"It was harsh," she said. "For a lot of farmers, that's become their main form of advertising."

Some wanted to write to their congressmen about the crackdown, others went to different social media platforms, but "the fact is Facebook is the largest available," Finefield said.

Beaver said the crackdown on animal sales stemmed from Facebook not contributing to puppy mills, "but that's quite different from selling cows and horses."

In a five-star review for Open Range, someone with the user name Grand Blue Silkies said, "I have been in FB jail 3 times now for making sales posts. I am very tired of not having a place to not sell my birds...But now, I have a place."

According to Facebook's commerce policy, people are prohibited from selling live animals, livestock, pets, animal furs, leathers, wool, and other animal parts, even taxidermy. The marketing of animal cages and products, such as squeaky toys and collars, is allowed.

"As we strive to protect the welfare of animals against illicit trades, we cannot always ensure their safety in a peer-to-peer transaction," Facebook said in April.

Some equate marketing animals on Facebook to notices on Craigslist. Finefield does not.

"For lack of a better word, you can 'creep' on who you are selling to" on Facebook, she said, more so than on Craigslist. On Facebook, the buyers and sellers know each other through groups that have been in place for years.

"It really was a backwards step on Facebook's part," she said.