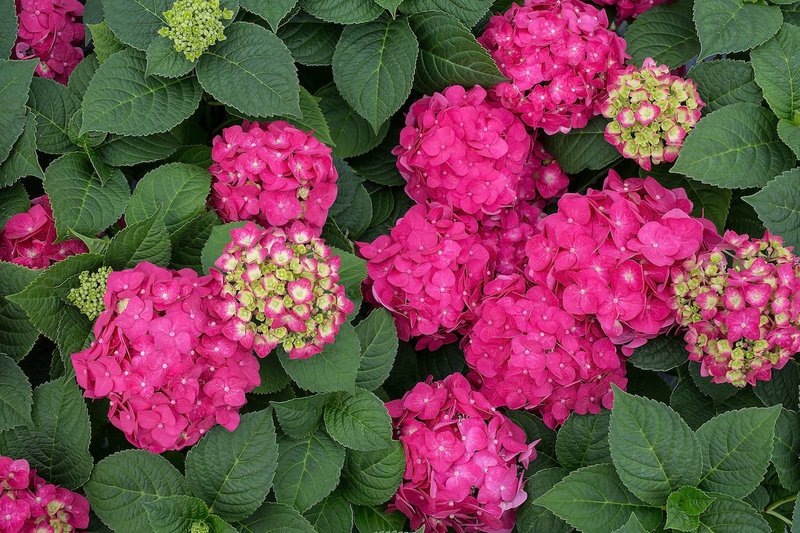 Summer Crush is the latest in the series of Endless Summer hydrangeas. It was bred to speed up the flowering cycle -- an issue in northern gardens. (Photo courtesy Endless Summer Hydrangeas via The Washington Post)

Robert "Buddy" Lee has been a grower of wholesale plants and a registered nurse over the years, but his one abiding preoccupation has been his need to find a spring-flowering azalea that blooms through summer and fall.

More than 40 years ago, from his fields in southern Louisiana, this was a lonely quest but not a quixotic one. As the inventor of the Encore Azalea brand, he has given gardeners more than 30 azaleas in various sizes and bloom color, with more in the works.

"You have waves of color in summer," he says. "And as it cools down to return to more of the spring temperature range, you'll get a lot more bloom."

Lee may have been a pioneer in the desire for a deja vu moment in the garden, but he is no longer alone. The ornamental plant industry is defined by a race to develop and trademark plants that keep on blooming beyond their natural moment in the growing year. 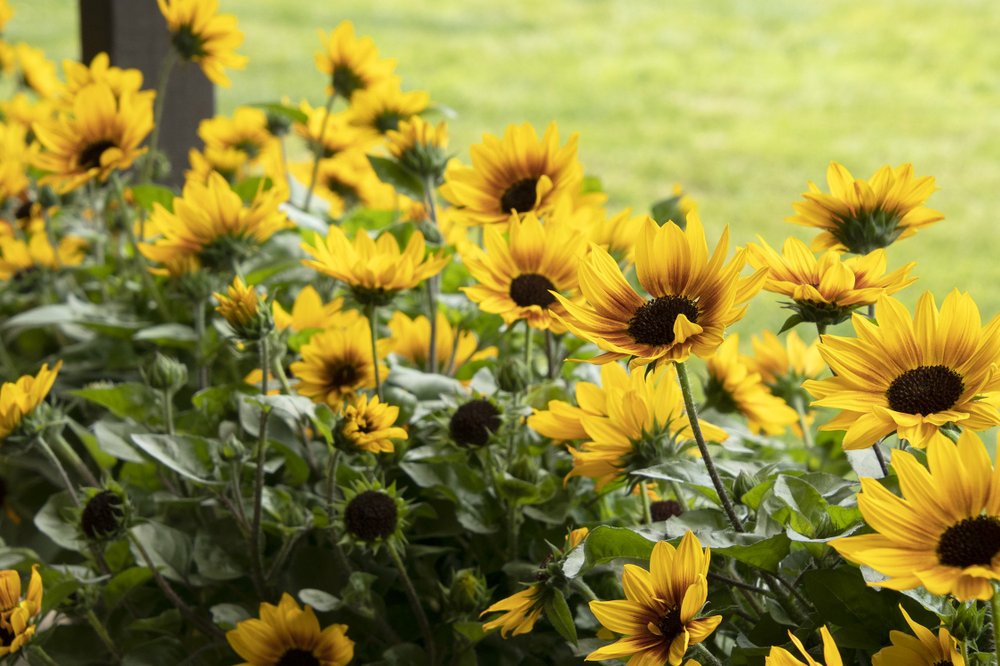 SunBelievable Brown Eyed Girl is an annual sunflower that grows three feet high and wide and produces continuous flowers until the frost. Monrovia hopes to sell more than a million of them next season. (Photo courtesy Monrovia via The Washington Post)

"It's what we are all striving for in every genus," said Jonathan Pedersen, vice president of sales and business development at Monrovia Nursery, a major wholesale grower.

In addition to fall-blooming azaleas, consumers can find hydrangeas that flower in September, sunflowers still going strong in October, lilacs in fragrant bloom in August and even a clematis that produces its bell-like blooms until frost.

Roses have always been pushed by breeders to re-bloom, but the days of them flushing every eight weeks or so have been replaced by near-continuous display.

The floral conveyor belt may upend our sense of a garden's seasonality, but the breeders, growers and marketers are confident that homeowners will be drawn to the continuous displays like bees to nectar. They already are.

More than 2.6 million of Lee's creations are sold annually, and their popularity is squeezing out traditional evergreen azalea offerings.

Garden centers are reducing classic offerings, said Kip McConnell, director of Plant Development Services, which has brought Encore Azalea to market. It works with 70 licensed growers, who also grow ornamentals for others, and many of them have dropped spring-only azaleas in favor of re-bloomers, he said. "It's been a big transition."

There may be purists who feel a garden is characterized and made more interesting by a parade of blooming plants adhering to their own season, but such a view may not be widely shared.

"Anything that gives gardeners more confidence and gratification is good for the world of horticulture," said David Roberts, head breeder at Bailey Innovations. "It makes it easier even for a novice gardener to feel successful, and that drives the industry."

The company is the plant development arm of Bailey Nurseries, which markets the Endless Summer brand of re-blooming hydrangeas, represented by five varieties. Since their introduction in 2004, almost 30 million plants have been sold.

Shrubs that bloom in spring, such as azaleas, must get their flower buds through the winter. Summer-flowering shrubs flower from new growth, so the key to developing ever bloomers is to find plants that do both.

All those years ago, Lee noticed that some azalea varieties had a tendency to flower sporadically in the fall, so he crossed those with a summer-blooming azalea from Taiwan (and many others along the way). The 31 he and McConnell have introduced were selected from tens of thousands of seedlings Lee has made over the past four decades.

Another way to keep a plant flowering is to give it sterile flowers. Denied successful pollination, it keeps producing blossoms.

A few practical points: Flowering takes a lot out of a plant, so it's a good idea to give the plants optimal conditions. For azaleas, that means a little shade, organically enriched, moisture-retentive soil on the acidic side, and a light mulch.

Some of the re-flowering shrubs should be given a light trim after the initial spring flowering. This will encourage the new growth that carries the new flower buds.

More so than with other plants, it's important that re-bloomers be allowed to rest before the arrival of freezes because if they are in tender growth, they are prone to damage or death. Stop fertilizing by the end of July, don't prune them in late summer and cut back on watering in early fall. 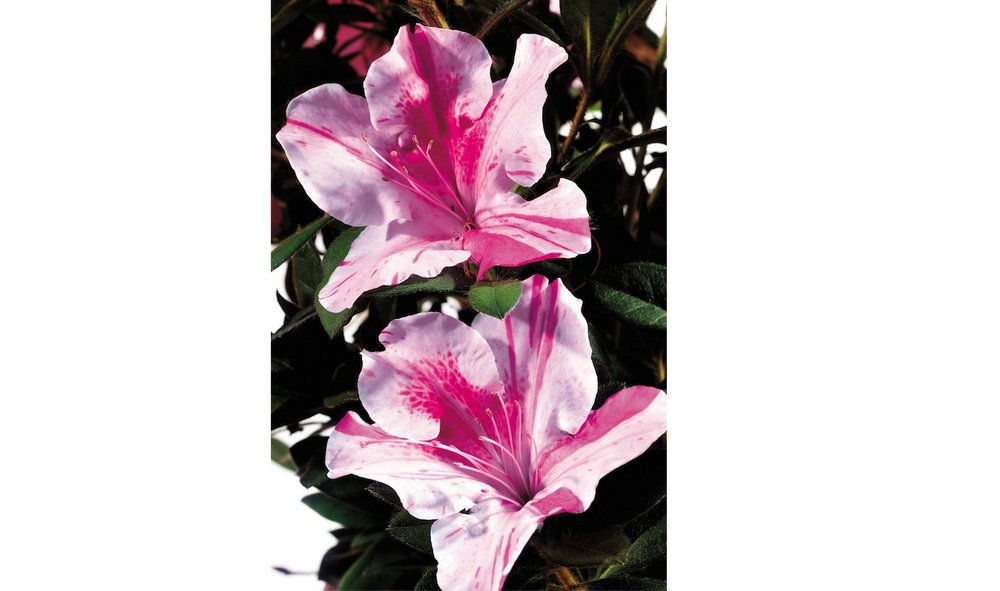 The first Encore Azalea, Autumn Rouge, was introduced in 1997. The series includes dwarf plants (up to three feet) and intermediates (three to five feet high), and colors such as red, purple, shades of pink and white.

Spring Meadow Nursery in Grand Haven, Mich., under the Proven Winners brand, produces a re-blooming azalea developed by North Carolina State University breeder Thomas Ranney and named Perfecto Mundo. It was selected for its compact size, hardiness and resistance to lacebug, said Stacey Hirvela, horticulture marketing specialist at Spring Meadow. A second will be available to consumers in 2021, she said.

Monrovia has five varieties under its Double Shot series. The energy the plant puts into the flowers helps to keep it compact, Pedersen said.

We speak here of the eternally popular hortensia hydrangea that usually blooms in June (in Arkansas) known botanically as Hydrangea macrophylla. Its flowering on the previous year's wood led to three basic problems: In northern states, it could be counted on to survive but not bloom after a harsh winter, especially without a protective snow cover. In the South, it was prone to sprout in early spring and then get damaged by a late frost. The third calamity came at the hands of the neatnik gardener, who cut it back in March and removed most of its flowering wood. 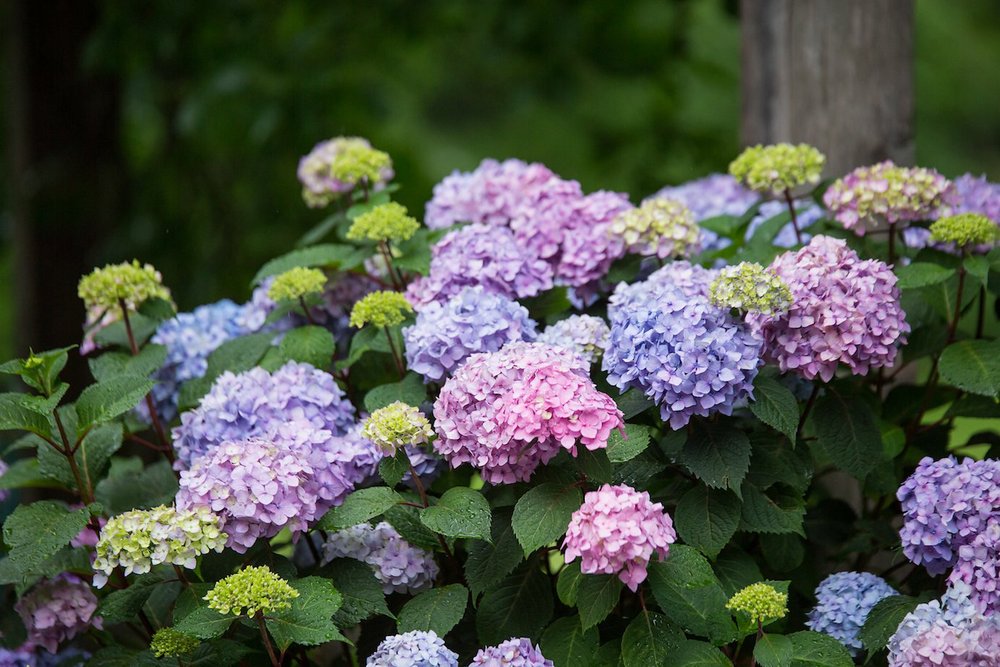 BloomStruck is one of five varieties in Endless Summer's collection of re-blooming hydrangeas. (Photo courtesy Endless Summer Hydrangeas via The Washington Post)

The first re-bloomer, Endless Summer, was launched 15 years ago. The range extends to five varieties, including a lacecap named Twist-n-Shout. The latest was introduced this year as a compact red-purple mophead variety named Summer Crush.

Hydrangea breeders have been focusing on such smaller varieties, which cycle into repeat bloom faster than larger ones. One criticism of re-bloomers in northern states has been the endless wait for Endless Summer. In addition, breeders are seeking to reduce the wilting that besets hydrangeas in hot climates, Roberts said. 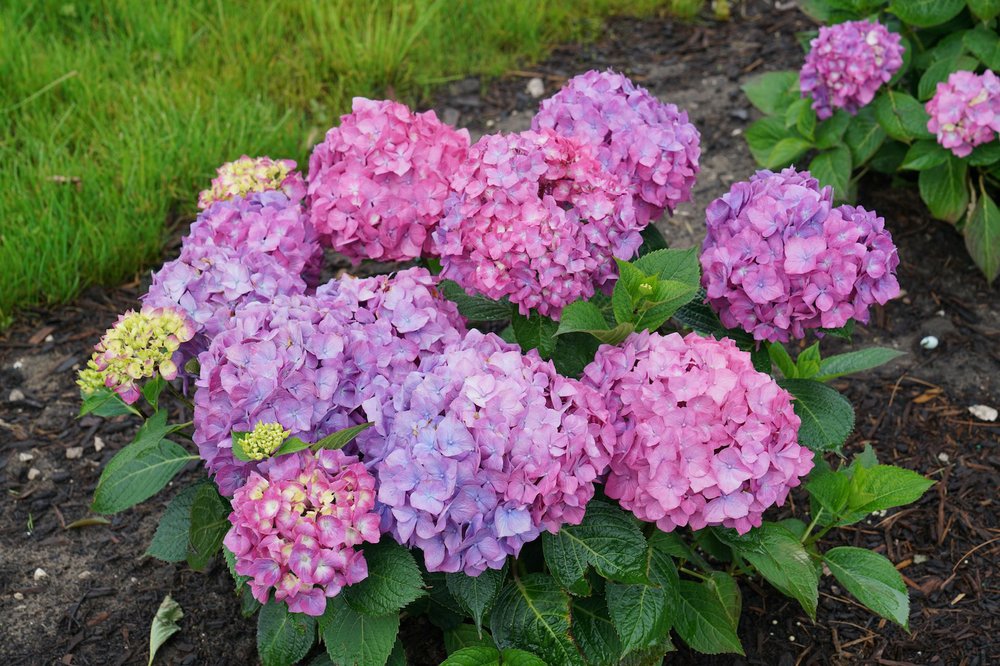 Spring Meadow and Proven Winners have released their own line, under the Let's Dance trademark. Diva is a showy lacecap. The latest introduction is Rave, a domed mophead with violet blooms. Hirvela says it's the best bloomer to date, with other varieties available in 2021. 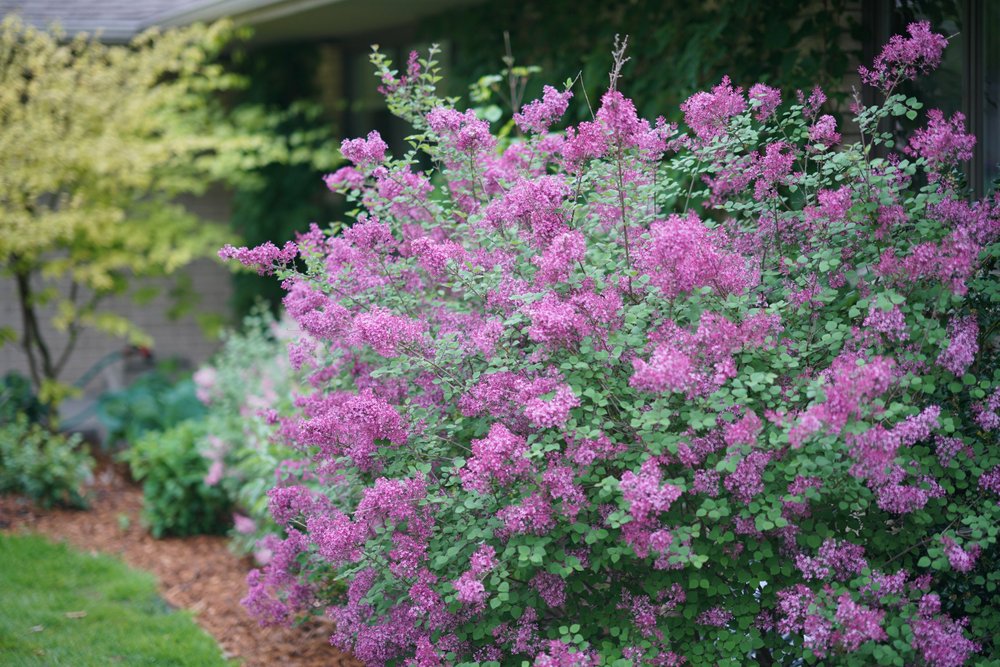 Lilacs perform poorly in the heat and humidity of the South, but even where they are happy, they draw this valid criticism: Lilacs, or common French lilacs especially, take up too much valuable real estate for the amount of ornament they provide. Proven Winners has four re-bloomers named, cleverly, Bloomerang, and which grow to just five feet or so. The key to re-flowering, Hirvela said, is not in trimming but to keep them in vigorous growth with one late spring feed, plenty of sunlight and sufficient water when it gets hot and dry. 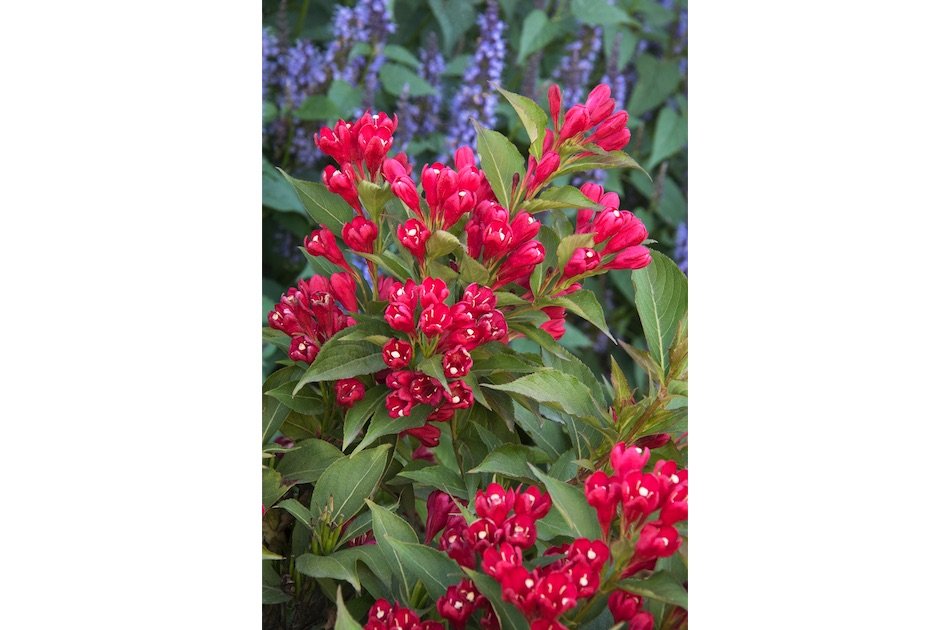 Weigela Crimson Kisses is a spring bloomer that repeats through the summer. (Photo courtesy Monrovia via The Washington Post)

Bailey has introduced a white-flowering crepe myrtle shrub — Lunar Magic — that will cycle into bloom every 40 days or so. It also produces a re-flowering chaste tree.

Proven Winners markets re-flowering weigelas — five varieties under its Sonic Bloom brand. Double Play Doozie is a Japanese spirea that also fits the bill. Monrovia has a re-flowering weigela named Crimson Kisses, and a line of rose of Sharon — the Chateau series — that repeats.

Some may consider bearded irises as a blast from the past, but many of the newer varieties are of re-blooming types that put on as much of a show in October as they do in May — to a degree that they can mess with your mind. Check out Winterberry Irises in Cross Junction, Va.

The industry has been moving in other directions. One of the plants I'd like to get my hands on is an herbaceous clematis named Stand By Me, developed by the breeder Hans Hansen at Walters Gardens in Zeeland, Mich. It forms a three-foot clump rather than a woody vine. Given a light trim after initial flowering, it will produce its bell-like blooms all summer, said Hansen's colleague Evan Elenbaas. It too is sold under the Proven Winners brand.

Proven Winners has its own suite of repeating hardy salvias, three under its Profusion series, and one named Crystal Blue. "It's a clear light blue," Elenbaas said. "It attracts way more bees than any other salvia." Walters Gardens has also developed three summer phlox varieties and a catmint named (what else?) Cat's Meow.

I can't leave this topic without mentioning an annual that repeats. Isn't that what annuals do, you ask? This is a sunflower named SunBelievable Brown Eyed Girl, introduced in North America by Monrovia. Instead of a tall, thick-stalked beast reaching to the sky, it forms a clump no more than 3-feet high and across and is festooned in continually appearing blooms, golden yellow with sterile brown discs. I have been growing it since June, and it functions ornamentally as a perennial or even a small shrub, if only for one season.

Monrovia produced half a million in its first year and plans to more than double that for next season, said Pedersen, who brought it over from England. "I feel pretty lucky to have stumbled across a plant like that," he said. "It's a blooming machine."