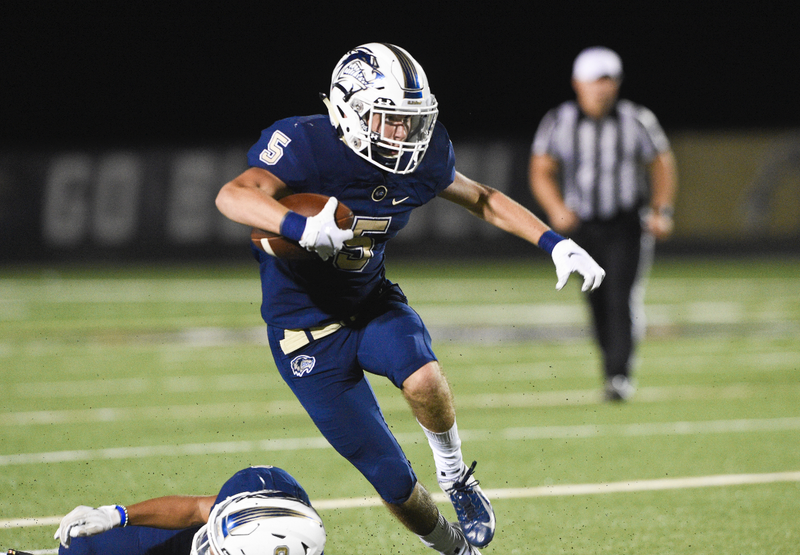 Stephen Dyson leads Bentonville West in receiving with 25 catches for 323 yards for the Wolverines, who face the Springdale High Bulldogs tonight at Jarrell Williams Bulldog Stadium in Springdale. - Photo by Charlie Kaijo

FORT SMITH — An explosive first half paced Bentonville West on Friday night as it rebounded from a season-opening loss with a resounding 37-13 road win over Fort Smith Southside in Jim Rowland Stadium.

West (1-1), which suffered a 47-34 loss to Owasso, Okla., last week, came out firing in the first half for the second straight game, but this time the Wolverines were able to cruise to victory in their second game of the season.

“This was a big game for us and a chance for us to get back on track after last week,” West coach Bryan Pratt said. “We felt like we were close last week but we had a few breakdowns. We felt like if we could clean some things up we’d have a chance.”

McDonald had 312 yards passing to go along with those five touchdowns.

“Dalton runs the show,” Pratt said. “He has some experience now and is a year stronger and has a year more experience in the offense. He’s able to keep plays alive with his feet and he has a great group of players around him.”

Against Owasso a week ago, West led 20-6 midway through the second quarter before eventually losing in a wild shootout with the Rams.

The Wolverines would add another quick score shortly thereafter when a wild snap sailed over the head of South-side quarterback Parker We-hunt’s head and out of the end zone for a safety and a 9-0 advantage.

McDonald would then find Jonas Higson from 35 yards out on their next possession and Stephen Dyson added a two-point conversion run to increase the lead to 17-0.

McDonald, who converted his next five passes into first downs for West, completed a 37-yard pass to Brandon Humes on a slant down to the 1, and Nick Whitlatch scored two plays later and the Wolverines led 24-0.

Southside (0-1) would finally get on the scoreboard late with a pair of touchdowns from Wehunt to Jack Tyler — a 31-yarder and another one to Josh Hannah from 32 yards out with 17 seconds left in the contest.

“Our defense played very well,” Pratt said. “We challenged them this week to get some stops. I think Southside only had less than 20 yards of total offense in the first half.”

• West’s Nick Schmitt hauled a 31-yard scoring pass on his first catch of the game.

• Bentonville West will travel to defending state champion Bryant next Friday while Southside travels to Greenwood.