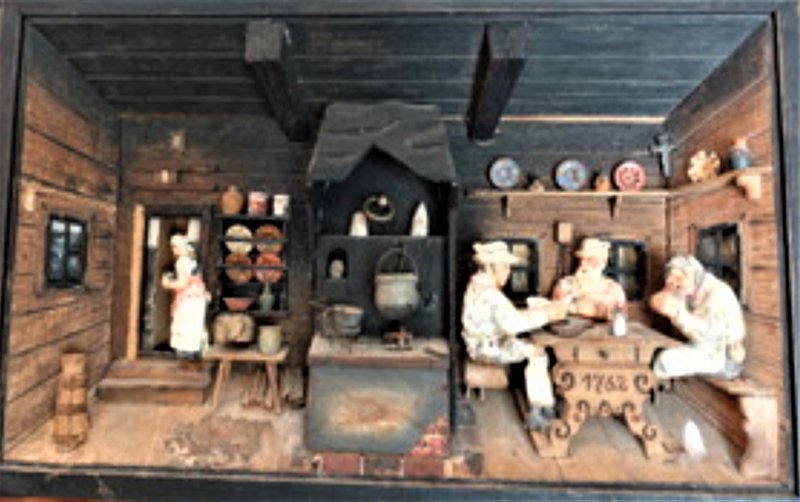 This diorama or shadowbox provides a view of a French or German tavern from the 19th century. (Handout/TNS)

DEAR HELAINE AND JOE: I was given this piece by my grandparents and am interested in knowing when it was made, where and why.

DEAR C.: Some pictures may be worth a thousand words, but this particular picture's words are a little garbled.

At one time vital information was on the label on the back, but now the small paper rectangle is not easy to read, at least not in the photographs we have. What we can decipher appears to be the word "Grenoble" and "1815," which may refer to Napoleon's visit to Grenoble, France, in 1815 when he was once again proclaimed emperor.

We may or may not be reading this correctly because the scene appears to depict a rather common tavern interior with three men sitting at a table inscribed "1762" and a woman in a doorway. Instead of this having anything to do with Napoleon and his 1815 visit to Grenoble, it may just be a souvenir that represents a tale from popular literature or a folk tale — or maybe just a romanticized scene of an 18th- or 19th-century tavern.

Generally a piece like this would be called a "diorama," which in this case is a small-scale replica of a scene. (A diorama may also be a full-size 3-D depiction, often found as museum exhibits or visual aids in a visitor's center of some sort of historical attraction.)

The word "diorama" originated in 1823 in France when Charles-Marie Bouton and Louis Daguerre (of daguerreotype photography fame) created a full-size theatrical attraction in Paris that made the audience feel as if they were experiencing a real scene when actually they were seeing cleverly lighted paintings on linen panels.

This diorama is somewhat in the style of the Black Forest, which was a kind of carving that can be traced to an 1816 famine in Brienz, Switzerland. Looking for a way to buy food, the local woodcarvers began turning out furniture, household accessories and decorations that would appeal to tourists.

Black Forest items were made primarily in Switzerland and Austria and consisted of such things as the familiar cuckoo clocks, boxes decorated with a variety of animals, benches supported by bears and figures of everything from human hunters to owls, wild boar, dogs and pheasants. Some items were very fanciful, while others were more practical.

Some of the Black Forest dioramas were carved from single boards to form a 3-D scene, but others appear to have had some assembly. Pine was often used, as was black walnut. The piece belonging to C. appears to have been made at least partially from black walnut and then painted.

This example is probably from the last quarter of the 19th century (circa 1890) and at auction would probably sell for around $400. Its retail value would be in the $600 to $750 range.

Helaine Fendelman and Joe Rosson have written a number of books on antiques. Do you have an item you'd like to know more about? Contact them at Joe Rosson, 2504 Seymour Ave., Knoxville, TN 37917, or email them at treasures@knology.net. If you'd like your question to be considered for their column, please include a focused, high-resolution photo of the subject with your inquiry.