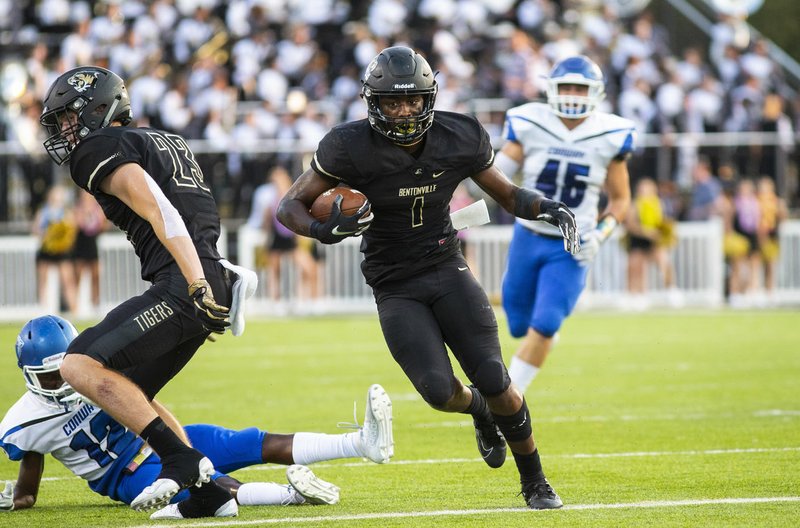 BENTONVILLE -- When the offense isn't totally clicking, a team can lean on its defense.

That's what Bentonville did Friday at Tiger Stadium, and the result was a 17-10 victory over Conway.

"Conway's a really good football team," Bentonville Coach Jody Grant said. "I told our guys after the game that they're going to win a lot of games this year. We were blessed to come out with this one."

It wasn't firmly in Bentonville's grasp until senior running back Preston Crawford picked up 3 yards on fourth and 1 to seal it with a minute left.

The Wampus Cats (1-1) got on the scoreboard late in the third quarter on a 1-yard plunge from Tommy Grady, then picked off Bentonville quarterback Andrew Edwards with under five minutes remaining. They drove into the Tigers' red zone before settling for a 30-yard Will Hogue field goal.

"It took a little adjustment for us to get going [offensively]," Conway Coach Keith Fimple said. "I've been here two years, and sometimes it takes a little bit for us to get going, and then something clicks and momentum starts going our way. Bentonville is fundamentally sound and as technique-driven as we will see, and that's what we wanted out of our nonconference schedule."

Conway was limited to 77 yards of offense in the first half as the Tigers staked themselves to a 10-0 lead. Bentonville's Levi Bennett picked off a Nick McCuin throw to thwart a potential scoring drive in the middle of the second quarter.

The only miscue for the Tigers in the first half was a Ben Pankau fumble on their opening drive after they had driven deep into Wampus Cats' territory.

Conway was led by sophomore running back Manny Smith, who had 112 yards on 10 carries, including a 50-yard run that set up its only touchdown.

Pankau finished with 207 yards passing, mainly in the first half, but he may be more important to the Tigers on defense and actually jammed his finger on that side of the ball, paving the way for Edwards to come in.

Edwards threw a touchdown pass to Trenton Kolb late in the third quarter that gave the Tigers a 10-point cushion.

OWASSO, Okla. -- Owasso, Okla. (2-0), intercepted three passes, including two of which it returned for a score, to roll past Fayetteville (1-1) at Owasso Stadium.

Omarr Baker and Gage Laney each intercepted Gibbs for touchdowns of 37 and 70 yards, respectively, in the second quarter. Laney's interception made it 27-6 Rams with 2:16 left in the first half.

Quinn McClain rushed for 62 yards and scored on a 32-yard touchdown run in the third quarter that pulled the Bulldogs within 27-16. But Owasso responded as Cole Dugger, who completed 13 of 19 passes for 213 yards and 3 touchdowns, threw a 54-yard touchdown pass to Mario Kirby to extend the Rams' score to 34-16.

Brandon Hughes hauled in a 37-yard catch to set up Bentonville West's first score, a 20-yard TD pass from McDonald to Carlos Hall.

The Pointers, led by first-year Coach Crosby Tuck, defeated the Airedales for the second consecutive season. They led 25-0 in the first quarter and never trailed.

Phillips also rushed for 123 yards and 3 scores on 11 carries.

Van Buren running back Brayden Rivas added 12 carries for 38 yards, including 2 touchdowns. Jude Bartholomew caught 6 passes for 162 including a score, while Maury Newton hauled in three passes for 63 yards including a touchdown for the Pointers.

Alma was led by wide receiver Grayson Bailey, who caught 6 passes for 94 yards and a touchdown. Ben Henley also had 12 carries for 108 yards with a score for the Airedales.