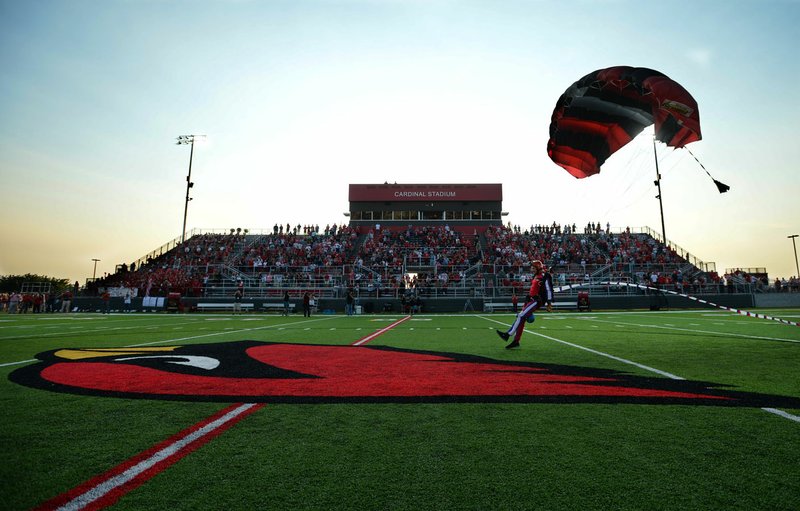 NWA Democrat-Gazette/ANDY SHUPE Joe Caldwell of Skydive Fayetteville lands Friday, Sept. 6, 2019, at midfield before the start of the Cardinals' game with Prairie Grove to open the school's new stadium. Visit nwadg.com/photos to see more photographs from the game.

FARMINGTON -- There were some awkward moments of silence Friday after the public address announcer at Farmington asked fans in the stands to rise for the playing of the national anthem.

But the silence was broken with the distant sound of an airplane overhead and fans began to cheer as two skydivers floated toward earth, one carrying a game ball and the other the American flag to midfield.

That was the start of a true home-opener on Friday when Farmington unveiled its new $16 million sports complex that includes a football stadium, an outdoor track, and an indoor facility spacious enough to hold everything except hot air balloon races.

Slightly more than a mile away, Allen Holland Field stands quiet now as a remnant of the past. The Battle of Highway 62 has shifted south to Cardinal Stadium, where Farmington faced Prairie Grove, the Cardinals' longest and most bitter rival.

Ron Hudson, a Farmington graduate who played on the Cardinals' state championship teams in 1972 and 1973, reiterated Friday the pride folks in this growing community have with their new high school and sports facilities. He cited Farmington school officials for their vision and hard work, starting with athletic director Brad Blew.

"They did a heck of a job all the way around, from top to bottom," Hudson said. "Brad Blew is to be commended. This game starts a new chapter with Prairie Grove. Danny (Abshier) is a Farmington grad and we're all proud of what he's done at Prairie Grove. We couldn't have picked a better team to open up with than Prairie Grove and Danny."

History will record for future generations what happened here in the first game at Cardinal Stadium on Sept. 6, 2019: Farmington 27, Prairie Grove 7.

"It exceeded expectations," Blew said after the game. "The crowd was amazing and they saw two good teams in a typical Battle of Highway 62. It's a perfect night if you're a Cardinal fan."

Foster Layman scored the first touchdown in the new stadium to cap an 80-yard touchdown drive for Prairie Grove on the opening possession. Drew Sturgeon countered first for Farmington when he caught a slant pass for a touchdown on 4th-and-4 in the second quarter.

Farmington and Prairie Grove are no longer in the same conference, but that's done nothing to diminish the long-standing sports feuds between the schools. The large crowd on Friday is evidence of that.

The weather was far from perfect for football, hot and humid with hardly any breeze for brief periods of relief. But the fans stayed engaged and a fireworks display signaled a victory. The Cardinals rushed back onto the field to celebrate after meeting briefly inside with their coaches.

"This is a great way to kick off the year," said Sturgeon, a senior who scored two touchdowns for the Cardinals. "The whole community is behind us and we're so thankful for this stadium."

Fans will long remember this game, not so much for the specific plays on the field but for the opening of the stadium that marks a new chapter in the rivalry between Farmington and Prairie Grove.

A night complete with skydivers.

The teams will go their separate ways now before facing off again next year at Tiger Stadium in a continuation of the Battle of Highway 62.