The Nation in Brief 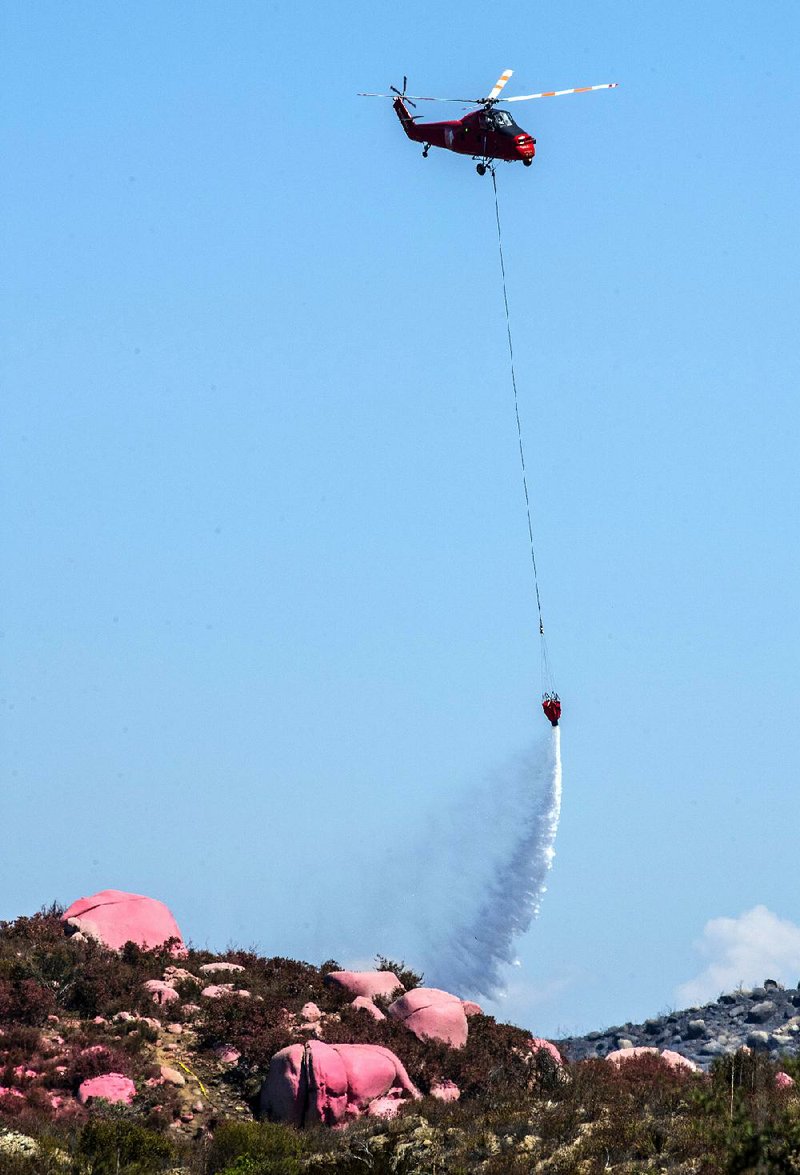 A helicopter drops water Friday on a wildfire in Murrieta, Calif. Evacuation orders in the area were lifted Friday though the fire continues to burn.

OKLAHOMA CITY -- The FBI is investigating after computer hackers managed to steal about $4.2 million in funds from a pension system for retired Oklahoma Highway Patrol troopers and other state law enforcement officers, state officials said Friday.

A notice posted on the Oklahoma Law Enforcement Retirement System website said the agency notified the FBI and couldn't comment further on details of the breach.

"However, we are certain the stolen funds will be recovered," the post said. "Most importantly, no pension benefits to members or beneficiaries have been impacted or put at risk."

Duane Michael, the executive director of pension system, told The Oklahoman newspaper that the theft happened Aug. 26 after an employee's email account was hacked. He said the funds were being managed by an outside investment manager on behalf of the pension system and that the agency was able to recover about $477,000 of the stolen funds.

FBI spokeswoman Andrea Anderson said the agency has been advised of the incident, but she declined to comment further, saying it was an "ongoing matter."

Donelle Harder, a spokeswoman for Republican Gov. Kevin Stitt, said the governor was notified of the breach this week and said the cyberattack underscores the importance of modernizing and consolidating the state's information technology infrastructure.

WASHINGTON -- A federal judge greatly reduced the sentences of three former Blackwater security contractors, in the latest development from a case dating back to the 2007 shootings of unarmed civilians in Baghdad.

U.S. District Judge Royce Lamberth on Thursday sentenced Paul Slough to 15 years in prison, Evan Liberty to 14 years and Dustin Heard to 12 years and seven months. All three had received 30-year terms in a 2015 trial -- a mandatory sentence for the commission of a felony while using a military firearm. A fourth defendant in the same trial, Nicholas Slatten, was sentenced to life in prison.

The case stems from a 2007 incident when the men's Blackwater unit opened fire at a Baghdad traffic circle, killing 14 unarmed Iraqis and wounding 17. The men all essentially blamed the fog of war, claiming they mistakenly believed they were under attack.

The shootings strained U.S.-Iraqi relations and focused intense international scrutiny on the extensive use of private military contractors in Iraq.

Those convictions were all overturned on appeal in 2017. The three-judge panel ruled that the 30-year mandatory sentence was unjust and excessive; the rule was meant to be used on drug traffickers and gang members, and had never before been applied to military contractors who had essentially been deputized by the U.S. government.

Slatten, who prosecutors contend shot first and instigated the massacre, was retried separately last month and was once again sentenced to life.

BOSTON -- A Massachusetts mayor was arrested Friday on charges he conspired to extort hundreds of thousands of dollars from companies seeking to operate marijuana businesses.

Fall River Mayor Jasiel Correia, who became the city's youngest mayor when he was elected in 2015 at age 23, accepted cash bribes in exchange for issuing official letters needed to obtain a license to set up a pot business, authorities alleged.

At least four business owners paid a total of $600,000 in bribes to the mayor, and he used the money to support a lavish lifestyle and cover mounting legal bills, they said.

In one instance, Lelling said, Correia walked into a vendor's office and simply asked for $250,000 to issue one of the letters. Another time, Correia was paid $75,000 in cash while sitting in the backseat of a car. He promptly handed over a signed letter, Lelling said.

In a brief court appearance, Correia pleaded innocent to the charges, which include bribery, extortion, wire fraud and filing false tax returns.

SAN DIEGO -- Three senior leaders of a Navy SEAL team have been dismissed from their positions "due to a loss of confidence that resulted from leadership failures" after one unit was sent home from Iraq and accused of sexually assaulting a female service member.

Naval Special Warfare Command announced Friday that Rear Adm. Collin Green relieved them because their failures caused a breakdown of order and discipline within two units while deployed to combat zones.

The SEAL team has faced several misconduct accusations in recent months, including the unit sent home amid sexual assault allegations.