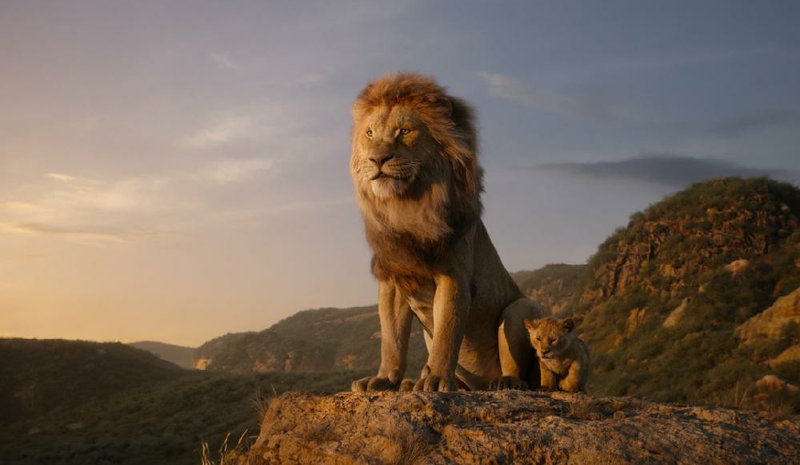 James Earl Jones provides the voice for Mufasa and JD McCrary is the young Simba in Disney’s The Lion King. It came in at No. 3 at last weekend’s box office and made about $6.7 million.

LOS ANGELES -- The long Labor Day weekend box office, historically one of the slowest times of the year for cinemas, was notably devoid of new releases from major studios.

Instead, OTL Releasing's Don't Let Go, Forrest Films' Bennett's War and Yash Raj Films' Saaho all opened outside the top 10 as the box office chart remained pretty much unchanged from two weeks ago.

Angel Has Fallen (Lionsgate and Millennium) held the top spot for a second weekend, adding $11.6 million for a cumulative $40.7 million through Sunday.

Rounding out the top five, Columbia's Overcomer added $5.7 million in its second weekend.

At No. 6, Fox Searchlight's Ready or Not added $5.6 million in its second weekend.

In seventh place, Lionsgate's Scary Stories to Tell in the Dark added $5 million. At No. 8, Columbia's Spider-Man: Far From Home added $4.3 million.

The film was resurrected last weekend with the addition of four minutes of new footage as well as 2,154 additional theaters for a total of 3,162. The movie's re-release came just before Columbia and Marvel Studios decided to part ways, unceremoniously dumping the webslinger from future Avengers films.

Only one original film this summer ranked among the top 10, and it came in 10th. Quentin Tarantino's Once Upon a Time ... in Hollywood has made $131 million through Monday domestically, plus sizable ticket sales abroad.

Among the newcomers, OTL Releasing, a sublabel of Universal, released the R-rated Blumhouse Tilt thriller Don't Let Go to $2.4 million, landing at No. 14, according to estimates from measurement firm Comscore. The $5 million film, with David Oyelowo and Storm Reid and directed by Jacob Aaron Estes, follows a man and his niece trapped on different timelines. It earned a 42% rotten rating from review aggregation site Rotten Tomatoes.

Faith-based motocross movie Bennett's War struggled, opening with $445,151 across 970 locations and a projected $579,379 through the holiday, according to Box Office Mojo. It earned a 60% fresh rating on Rotten Tomatoes.

The Indian action thriller Saaho opened on 380 screens to $1.9 million, according to estimates from Box Office Mojo. The $48 million picture scored the second-highest opening day ever for an Indian movie in that country, earning approximately $18 million. It earned a rare 0% rotten score on Rotten Tomatoes.

Lionsgate opened the Spanish-language comedy Tod@S Caen in 371 locations to $1.1 million with a projected $1.3 million gross through the holiday.

IFC Films debuted Official Secrets, starring Keira Knightley, in four locations to $80,046 for a weekend-best per-screen average of $20,012. It earned an 80% fresh on Rotten Tomatoes.

Magnolia released Raise Hell: The Life and Times of Molly Ivins in 18 locations in Texas to $93,120 for a per-screen average of $5,173. It earned a 95% fresh rating on Rotten Tomatoes.

Disney's success has been a welcome dose of reliability for theater owners in need of sure-hits amid widespread anxiety over the rise of streaming. And it has prompted fears of cultural monopoly.

"For the industry, I think it's a point of stress, to put it mildly. Other studios are now strategizing around Disney. That's what you have to do," said Paul Dergarabedian, senior media analyst for Comscore. "But lest we think Disney was the only game in town, there were other studios that found opportunities within the calendar."

Dergarabedian noted, though, that the summer season isn't quite what it used to be. Studios now spread their biggest movies around the calendar more freely. Add Endgame to the totals and the summer looks a lot better. This week will bring It Chapter Two from Warner Bros, which is expected kick off the fall season with a bang. After it comes, anticipated sequels for Frozen, Star Wars and Jumanji, along with big-budget originals including Ad Astra, Ford v Ferrari, Gemini Man and Netflix's The Irishman.