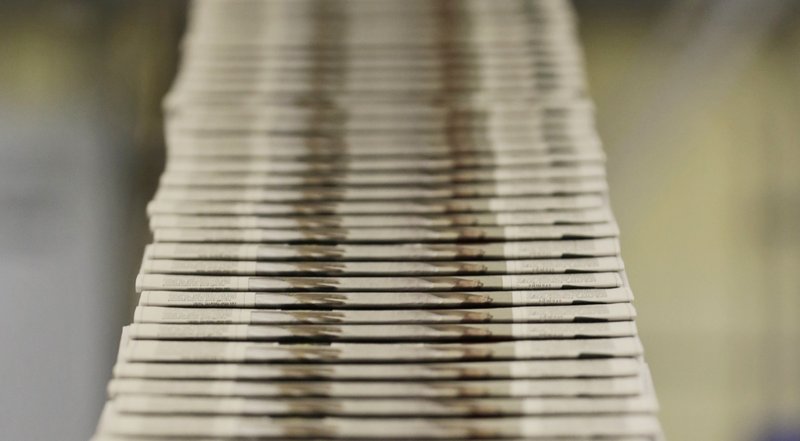 In this Tuesday, Aug. 6, 2019, photo, The Vindicator newspaper rolls off the presses in Youngstown, Ohio. The Youngstown paper announced in June it would cease publication Saturday, Aug. 31, because of financial struggles, but the paper will be printed by the Tribune Chronicle, which has bought The Vindicator name, subscriber list and website from owners of the Youngstown publication. (AP Photo/Tony Dejak)

A community college professor and a retired businessman stepped up Thursday to keep the Helena World turning.

Andrew Bagley, who teaches political science and history at the University of Arkansas System's Phillips Community College in Helena-West Helena, said Thursday afternoon that he and Chuck Davis, also of Helena-West Helena, have purchased the World from GateHouse Media.

Bagley said he couldn't disclose the purchase price. The sale, he said, will close Monday.

Jennifer Allen, a group publisher for GateHouse, said Thursday that she couldn't confirm the sale but that an announcement will be in today's edition of the World and on its website.

GateHouse, which is based near Rochester, N.Y., announced last week that the World and the Stuttgart Daily Leader would close today, unless buyers were found. GateHouse also will shut down its printing press in Pine Bluff at the end of the month. The facility printed the Stuttgart and Helena-West Helena newspapers, as well as the Pine Bluff Commercial.

The Arkansas Press Association is still optimistic that a buyer for the Daily Leader would be found, Executive Director Ashley Wimberley said.

Bagley and Davis will move the Helena World's publication from twice weekly to once a week. It also will have a new website.

There won't be an edition of the World next week because the new owners will be revamping a subscription list it purchased from GateHouse, which had already began making refunds, Bagley said.

The World had a paid circulation of 625, according to the latest Arkansas Press Association figures. The newspaper was founded in 1871.

The new World will have two full-time employees -- up from the current one -- and one part-time employee, Bagley said.

Bagley already is a contributor to the World, and will continue to cover sports at his newspaper without pay, he said.

A lease for the World's new headquarters is likely to be signed today, he said.

Davis will be the majority owner with Bagley holding a minority share of the new company, Helena World and Chronicle Co. LLC.

Davis' career, according to a news release, includes the military and work in the aviation industry, export-import interests and with the federal Small Business Administration.

"Chuck and I both believe in the importance of a community newspaper to have a vibrant community and to provide quality journalism," Bagley said by telephone shortly before he was to go on the radio to cover a volleyball game. "We started making calls to save the World as soon as we heard the news last week."

Bagley is a former president of the Helena-West Helena School Board. He said he was "done with politics" after his defeat last year in a re-election bid. Voters during Bagley's term on the board approved a millage increase that has raised more than $30 million for new facilities for the school district, including a high school set to open this winter.

GateHouse's plans to close the two Arkansas papers came just three weeks after it announced its $1.4 billion purchase of the Gannett Co. to become the nation's largest newspaper chain.