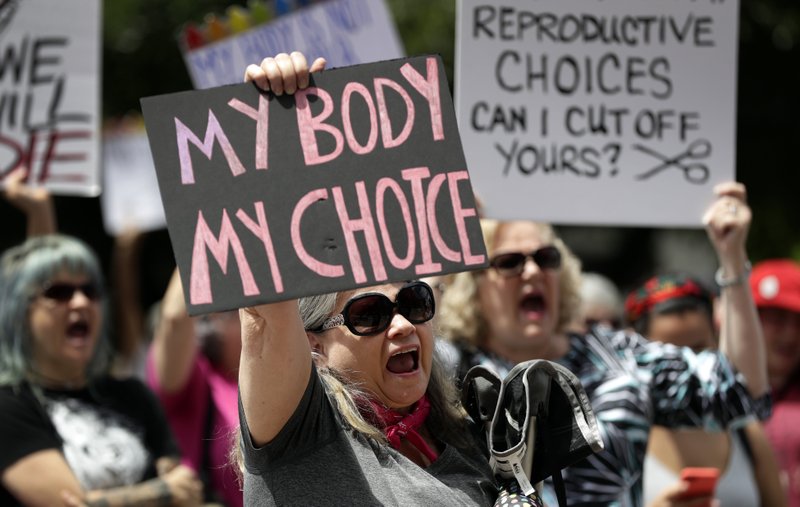 In this May 21, 2019 file photo, a group gathers to protest abortion restrictions at the State Capitol in Austin, Texas. Arguments over a Texas law requiring that health care clinics bury or cremate fetal remains from abortions and miscarriages are set for a federal appeals court in New Orleans. (AP Photo/Eric Gay, File)

NEW ORLEANS -- Texas attorneys asked a federal appeals court Thursday to revive the state's requirement that fetal remains from abortions and miscarriages at health care facilities be buried or cremated.

A three-judge panel of the 5th U.S. Circuit Court of Appeals in New Orleans gave no indication when it would rule after the arguments. One panel member raised the possibility that a decision could be delayed until after the Supreme Court rules in a pending Louisiana abortion regulation case. No date for consideration has been set in that case.

The law, blocked last year by U.S. District Judge David Ezra, requires that fetal-tissue remains from abortions, miscarriages or ectopic pregnancies at health care facilities, including abortion clinics, be buried or cremated. It requires that ashes from cremation of such remains be scattered "in any manner as authorized by law" or buried. It says they cannot be placed in a landfill.

Lawyers for the state, in defending the law, say abortion rights attorneys challenging the law on behalf of clinics failed to prove those facilities would be unable to comply with the law. And they said Texas has a legitimate legal interest in "respecting the dignity of unborn life."

"Treating embryos and fetuses as medical waste ... is the literal definition of devaluing them," Beth Klusmann, an assistant solicitor general with the Texas attorney general's office, told the panel, arguing that Ezra's ruling should be overturned.

Ezra also found that the law imposes a burden on women seeking abortions because it "increases the grief, stigma, shame, and distress of women experiencing an abortion, whether induced or spontaneous."

Klusmann emphasized that the clinics lacked testimony from their clients regarding their feelings about the burial and cremation requirements. But David Brown, an attorney for the clinics, noted the trial record did include testimony from a woman who sought treatment at a hospital for a miscarriage. He said she was upset upon learning of the hospital's requirement for interment of the remains.

"She felt she was being treated as a child," Brown said.

Costa questioned both sides about whether it might be best to put off a decision until after the Supreme Court rules in the Louisiana case, June Medical Services v. Gee. The case involves that state's currently blocked requirement that says abortion providers must have admitting privileges at nearby hospitals.

Attorneys presenting arguments about the Texas law on both sides said they would prefer that the panel not delay a ruling.

The 5th Circuit is already holding a decision in another Texas abortion regulation case in abeyance pending action in the Louisiana case.