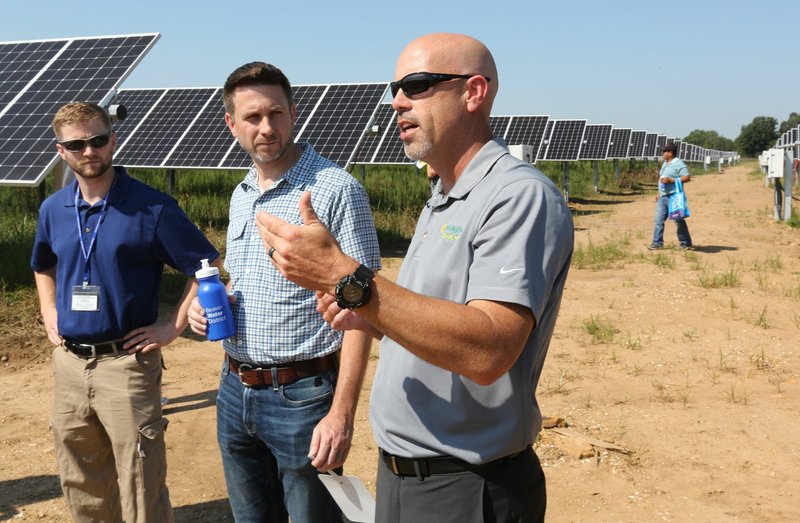 • The city will lease 87 acres at the wastewater treatment plants to Today’s Power Inc.

• TPI will build for a capacity of 5 megawatts of solar panels and 12 megawatt hours of battery storage at each wastewater facility and will assume the costs of operating and maintaining the facilities.

• The city will purchase electricity generated by the arrays at a rate that will be $0.0033 less per kilowatt hours.

• The city will assume the cost of making electric improvements to both sites to connect the arrays to the power grid. This cost will be paid from the city’s water and sewer reserve fund.

• Ozarks Electric will pay the city to manage backup generators at both plants, as well as for HVAC, lighting and storage losses associated with the battery storage.

Read more about the solar array project at bit.ly/faysolararray.

Each wastewater plant has its own battery storage system.

The entire system of 10 megawatts of solar power generation and 24 megawatt hours of storage will save the city about $180,000 annually, said Peter Nierengarten, the city's sustainability director. Work on the $23 million system started in March.

Today's Power put up most of the money for the project. The company is a subsidiary of the Arkansas Electric Cooperatives in Little Rock and offers solar array and energy storage systems, electric cars and charging stations to nonprofit groups, governments and private companies.

The wastewater treatment plants will use the energy generated from the solar panels, and the unused energy will go into storage, Nierengarten said. The plants will be able to draw from the storage units when sunlight is low, he said.

The rate the city will pay to Today's Power is slightly lower than what it paid to Ozarks Electric, and it will make a difference, Nierengarten said.

Today's Power owns 99% of the solar energy systems while the city owns 1% and the land. Construction crews from TPI and Ozarks Electric built the systems.

The city spent $700,000 for site preparation from its water and sewer fund. The city will make back that investment in a few years because of the savings in energy cost, Nierengarten said.

The project will pay for itself in 20 years with the money the city will pay Today's Power, said Michael Henderson, president. The project finished on time and about $3 million under budget, he said.

Ozarks Electric also will be able to draw from the solar energy systems, lessening the cooperative's cost to buy electricity.

"At some point, when storage for small scale residential makes economic sense, you won't even need to be attached to the grid at all," Henderson said. "It's just like you don't need to get to a pay phone to make a call anymore. It's that same mindset."

Ozarks Electric also operates a 1-megawatt facility called Ozarks Natural Energy east of Springdale. Clarksville built one solar farm in 2017 and is building another to create a 9.3-megawatt system to power the city's municipal buildings.

The two wastewater treatment plants account for a majority of the city's energy consumption, Nierengarten said. The project will move the needle for city operations from 16% to 72% clean energy, he said.

Mayor Lioneld Jordan said the project serves as an example of the city thinking outside the box for the good of its residents and the environment.

"This is a city of dreams," he said. "And this today is one of those dreams that has come true."