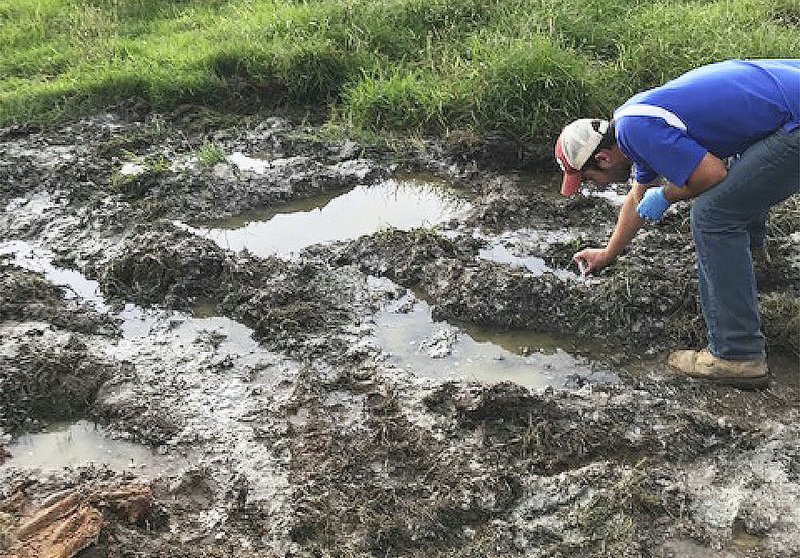 Courtesy Photo/BETHEL HEIGHTS A technician collects water from a pool on the ground in Bethel Heights to test. The photograph was included in the field testing results reported by the city to the Arkansas Department of Environmental Quality on Aug. 21. The testing was done Aug. 16, according to the city's email of the report.

BETHEL HEIGHTS -- The city used an unlicensed company to haul at least 20 truck loads of wastewater that was spread on land not allowed to receive it, according to the Arkansas Department of Environmental Quality.

The agency notified Bethel Heights on Wednesday afternoon it was breaking state law and ordered it to cease the activity, according to a letter released Thursday by Environmental Quality.

City records show White River Environmental Services, a private septic hauler, removed two tank loads of wastewater each day from Aug. 12 through 16 and Aug. 19 through 23. The records don't show the capacity of the trucks or how much wastewater was taken from the plant by White River.

The records also don't say how much or where the wastewater was applied.

Invoices show White River charged the city $10,000 for removing wastewater from the treatment plant twice a day for two weeks. The city was charged $500 a truck load.

The state's letter said the land is in Springdale and owned by Joe Reed.

"Neither White River Environmental Services nor Joe Reed have a permit for the land application of wastewater from ADEQ," the letter said. It doesn't identify the owner further.

"ADEQ will continue to monitor the situation and determine what, if any, further action needs to be taken," the department said Thursday in an email when asked if it would investigate White River or the landowner.

The city's wastewater system consists of a septic tank-pumped sewage collection system. Wastewater is collected from the sewage system and sent to one of two treatment facilities.

Documents from Environmental Quality record sewage surfacing in fields where the treatment system is buried as early as August 2013.

Bethel Heights officials submitted pictures of a technician collecting water from a pool on the ground. The department asked the city to submit photographs with a weekly report to document its progress in bringing the plant into compliance, said Robert Rhoads, an attorney representing the city. The photographs were included in the Aug. 16 report to the state.

The city also has hired BBB Septic and Portable Toilet Service of Bentonville, which, since the first of August, has carried 88,100 gallons of wastewater to the Northwest Arkansas Conservation Authority's treatment plant in Bentonville. BBB is licensed by the state for removal of sewage.

BBB charged the city 10 cents for every thousand gallons carried. Invoices from Aug. 5 to Aug. 16 show the city owes $8,810.

Mike Neil, manager of the plant, said the authority has the treatment capacity to take all of Bethel Heights' wastewater. The plant can run about 500,000 more gallons per day, he said.

Rhoads said the city ships only about half of the wastewater to the conservation authority's facility based on limits set by the state.

Field test results from the Bethel Heights treatment plants submitted by the city and posted on Environmental Quality's website noted the treatment plants continued to operate out of compliance with the city's permit in August. Department officials reported wastewater continues to surface on the ground at the plants. The city's permit doesn't allow any surfacing of wastewater, officials said.

Tests on Aug. 5 and Aug. 23 reported high E. coli and coliform numbers in the surface water, although it had been through the treatment plants. The city has contracted with Geotechnical and Testing Services in Fayetteville to do weekly tests.

Those high numbers were recorded even in areas of the treatment plants where Mayor Cindy Black reported repairs were finished and the system was operating. The city is required to send Environmental Quality weekly updates of the actions and tests taken at the treatment plants. Black reported the units were complete and operating in weekly reports, but later reports from the city show high levels of contaminants.

Department of Environmental Quality records show the problems at the Bethel Heights treatment plants that began in 2013 occurred nearly continuously until 2017, when city leaders reported to the state the system was finally in complete compliance. The state closed the enforcement case against Bethel Heights on Jan. 27, 2017, but in March, found the plant out of compliance again. A month later, the state said the city had addressed concerns to its satisfaction.

State officials May 6 ordered Bethel Heights wastewater and city officials to submit a plan for cleaning and repairing its plant. The state ordered the plan after a February inspection found numerous permit violations.

The department called the correction plan "inadequate" Aug. 16. The state said the plan didn't include all of the required elements.

The assessment of Bethel Heights' plan was included in a notice to the city detailing $122,000 of fines possible for polluting the ground, operating the plant out of compliance with its permit and providing false statements in its reporting to the agency.

The city Wednesday filed a response to the findings and requested an appeal hearing. The city denied all allegations and requested the enforcement action be dismissed. The document was prepared by Samuel E. Ledbetter, an attorney hired by the city.

Bethel Heights released a statement on its website July 26 denying allegations the city operates its plant above its permitted limits. The statement was posted after Environmental Quality ordered the city to inform residents of the high concentrations of contaminants in its fields.

Benton County Prosecutor Nathan Smith said last week he won't file criminal charges against Bethel Heights city officials as he had threatened Aug. 1. Smith sent a letter to Black saying she was in violation of state law by allowing water or air pollution that could adversely affect human health, animal or plant life or property.

Conviction is punishable by up to five years in prison and up to a $50,000 fine, his letter says. Smith said the mayor and other city officials can be held criminally liable if the city fails to cooperate with ADEQ and clean up the waste.

"The ADEQ confirms that the city is hauling excess wastewater to a treatment plant by truck and has hired new engineers to craft a long-term solution," Smith said last week.

"In light of this, I have informed the city that I will not pursue a criminal case at this time, but reserve the option to do so in the future if the city does not follow through with an approved solution."

The state collected samples around the city's wastewater treatment plants July 16 showing fecal coliform levels higher than the laboratory tests typically used to monitor wastewater could measure. The department sent the city a letter July 24 giving officials two days to come up with an interim plan to get its sewer problems under control.

Joe Brooks, members of the Charlotte Steele family and members of the Lawrence Bowen family allege the city releases untreated water onto their land and into their ponds, which lie on land adjacent to a treatment plant.

They have started petition drives to consolidate the smaller town into Springdale, allowing Springdale Water Utilities to take over wastewater treatment. Bethel Heights has about 3,000 residents.

Leaving one city for another requires petitions filed in favor of the change in both cities. Each of the cities' petitions must have signatures of at least 15% of the number of voters in the last mayoral election.

Then voters in each of the towns would have to approve the change. A simple majority vote in each city would pass the measures.