Diabetes care for the young to be focus of specialist at Children’s Northwest by Alex Golden | September 5, 2019 at 3:06 a.m. 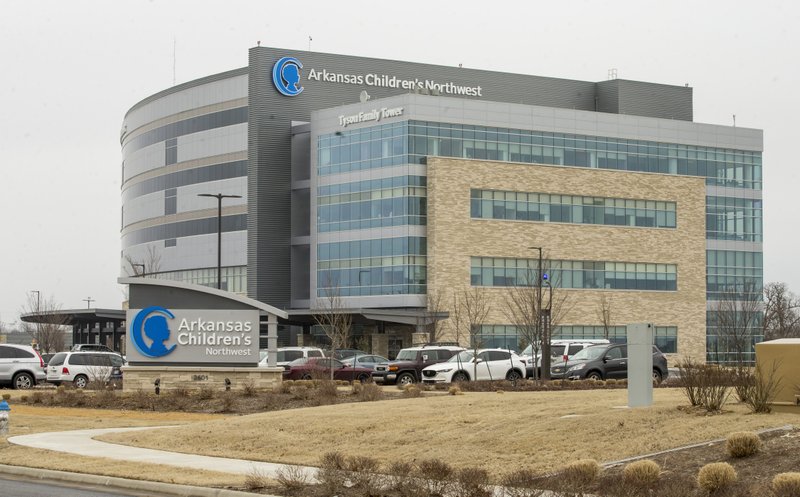 A view of Arkansas Children's Northwest Friday, March 8, 2019, in Springdale.

SPRINGDALE -- Children in Northwest Arkansas who have diabetes or are at risk for diabetes now have a doctor specializing in the disease close to home.

Arkansas Children's Northwest hospital, which opened in the spring of 2018, recently added its first pediatric endocrinologist.

"When we made the plans for this hospital, there were a number of pediatric specialties we said we wanted to try to open with," said Trisha Montague, senior vice president and administrator of the hospital.

"Endocrinology is one of those, so we always had that as part of our plan and have actually been recruiting for an endocrinologist for a while," she said.

Dr. Juan Mejia-Otero said he most recently spent three years completing a fellowship in pediatric endocrinology at the University of Texas Southwestern and working for Children's Medical Center of Dallas.

Most endocrinology patients are seen for diabetes, Mejia-Otero said.

"Endocrinology is about hormones and glands, so we see diabetes because the pancreas is a gland that creates insulin," he said. "But we also see any other types of disease related to glands."

Mejia-Otero sees patients for issues related to the thyroid, adrenal glands and puberty, for example, he said.

Heather Cantrell, an advanced-practice nurse practitioner who specializes in diabetes, has worked for Children's Northwest since it opened and sees patients for regular diabetes management. She previously worked at Children's Hospital in Little Rock.

Josie Grace Bradshaw, 6, has been Cantrell's patient in Little Rock and in Springdale.

"It is wonderful because when you have a child with Type 1 diabetes, it is extremely overwhelming," said Amy Bradshaw, Josie Grace's mother.

Her parents have had to get up in the middle of the night to check her blood sugar and have to be at all of her activities outside school in case her blood sugar levels become unsafe. Josie Grace has to see a professional at least every three months, including a doctor at least once a year, Amy Bradshaw said.

She was diagnosed with diabetes at age 2. She was a patient at Children's Hospital in Little Rock for a few days while her parents got a crash course in managing diabetes. They learned how to give Josie Grace insulin, what and when she should eat and how to monitor her blood sugar.

Diabetes management in children is more than proper diet and medication, Cantrell said. Hospital personnel and parents have to coordinate treatment with school nurses, explain managing a lifelong disease to children in ways they can understand and help them navigate what to do when they are away from home.

"Birthday parties can be a really big challenge," Amy Bradshaw said. Josie Grace can eat sweets such as birthday cake, but it has to be carefully planned and monitored.

Josie Grace also has to see her school nurse often because she has to make sure her blood sugar is at a safe level throughout the day taking into account recess, physical education and snack time.

Neither Northwest Health, which has medical centers in Springdale and Bentonville, nor Medical Associates of Northwest Arkansas, a group that has several specialty clinics throughout the region, have endocrinologists, spokeswomen for the facilities said.

Washington Regional Medical Center in Fayetteville has two endocrinologists, and one sees children with Type 1 diabetes on a case-by-case basis and the other is only accepting new patients who are 16 and older, a spokeswoman said.

"A lot of families have been traveling to Little Rock, which is an inconvenience. Also, there have been adult care providers seeing pediatric patients," Cantrell said.

Children's Northwest has had about 2,000 patient visits for endocrinology-related issues since May 2018, said Hilary DeMillo, a spokeswoman.

Most children with diabetes have Type 1, which is not preventable. However, the proportion of children with Type 2 diabetes, which is largely preventable through diet and exercise, is growing, Mejia-Otero and Cantrell said. Other factors, such as genetics, can make some people susceptible to Type 2.

"Type 2 is rapidly growing, especially with the obesity issue in Arkansas, so we do a lot of prediabetes, Type 2 diabetes and diabetes prevention," Cantrell said.

About 21% of students in ninth through 12th grades in Arkansas were obese in 2017, according to the federal Centers for Disease Control and Prevention.

Approximately 1.25 million American children and adults have Type 1 diabetes, according to the American Diabetes Association. An estimated 193,000 Americans under age 20 are diagnosed with the disease.

Northwest Arkansas is also home to more than 12,000 Marshallese people, who generally have a higher rate of diabetes than other ethnicities. Children's Northwest has a Marshallese interpreter on staff.

"If you ask me what the main culprit of childhood diabetes is, I'd say processed food and soda combined with lack of physical activity," said Dr. Appathurai Balamurugan, deputy chief medical officer at the Arkansas Department of Health.