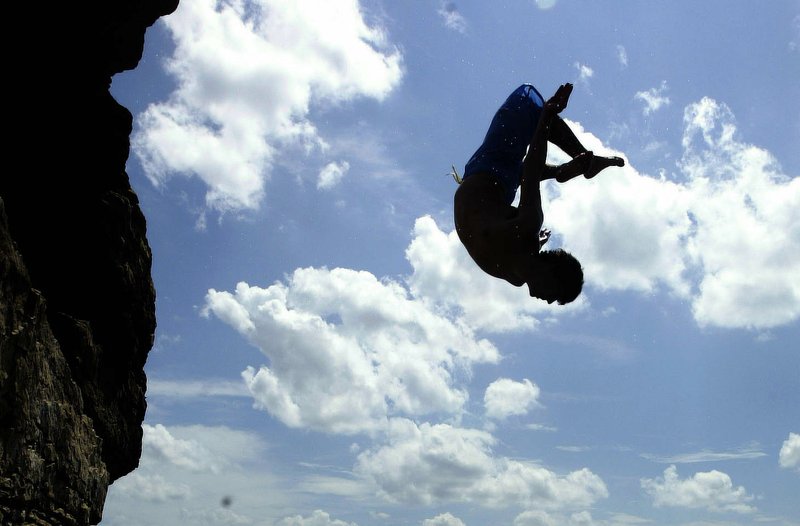 A young tourist plunges off a 25-foot bluff on Greers Ferry Lake in this 2005 file photo. Cliff-jumping is frowned upon, but keeping the lake clean enough that people want to jump in is not. The Greers Ferry Lake & Little Red River Association is holding its 50th annual cleanup for volunteers Saturday. Get wet, stay cool and keep it clean. Arkansas Democrat-Gazette file photo

On Saturday, for the 50th time in as many years, volunteers will descend on Greers Ferry Lake and the Little Red River to pick up trash and clean up the shorelines.

Known as the Greers Ferry Lake and Little Red River Cleanup, the annual event was started in 1969 by William Carl Garner of the U.S. Army Corps of Engineers, Little Rock Division, and helped inspire the first Great Arkansas Cleanup in 1979 and Keep America Beautiful's first National Public Lands Day in 1984.

The cleanup is sponsored by the Greers Ferry Lake & Little Red River Association and begins at 7:30 a.m. when volunteers meet at lake marinas and designated spots around the lake and the river. There will be a free old-fashioned picnic lunch at Lacey's Narrows Marina, 7674 Edgemont Road, Greers Ferry at 11:30 a.m.

The river cleanup is hosted by Trout Unlimited Chapter 722 and the Little Red River Foundation. Volunteers will meet at 8 a.m. Saturday at Lobo Landing off Arkansas 337 on Vogel Drive. A cookout will be held at the landing after the cleanup. See littleredrivertroutunlimited.com/events for more information.

Len Uecker is the president of the nonprofit Save Greers Ferry Lake Inc., and has participated in the last 20 cleanups.

"Our mission is to make people aware of the importance of clean water and a clean shoreline at Greers Ferry Lake," he says.

Uecker, 88, is not just a fan of the lake, he's also a resident. He and his wife, Patricia, are retirees from Illinois and have lived on the shoreline about halfway between the town of Greers Ferry and Heber Springs for 24 years.

"We looked around at a number of places in several states before settling on Greers Ferry Lake," he says. "It stood head and shoulders above any other area. We wondered why it was so much cleaner and well-protected, and that goes back to Carl Garner." 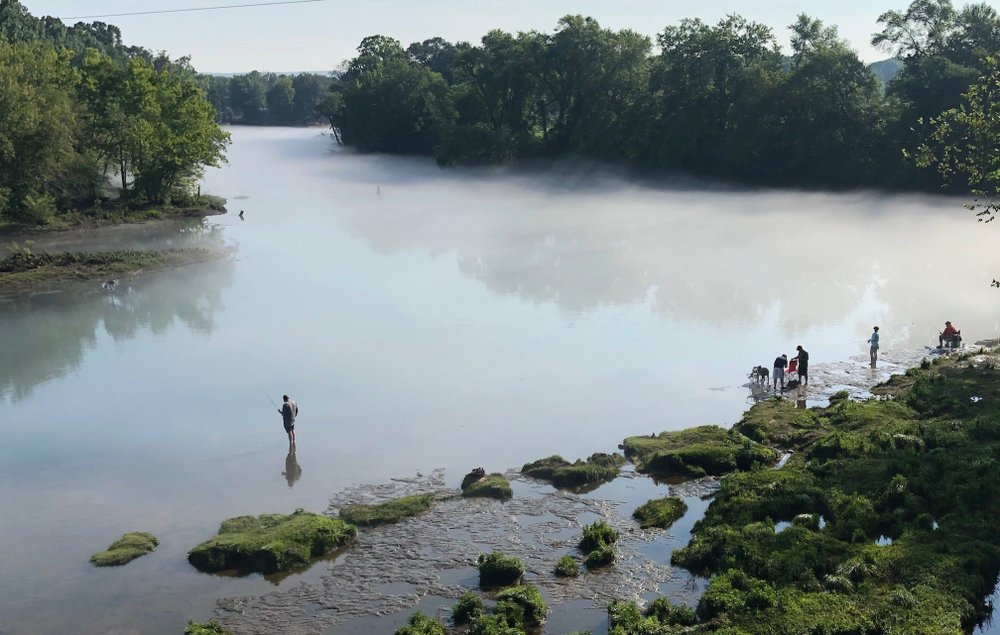 Garner, who died in 2014 at 99, was the resident engineer at Greers Ferry Lake, which was created when the Greers Ferry Dam was built between 1959-1962. The lake, completed in 1964, covers 31,500 acres in Cleburne and Van Buren counties and is popular among boaters and fishermen.

"Carl Garner started this with just a small group and it grew and grew," Uecker says. "I never saw a man more dedicated to his job."

Uecker says there's not as much trash on the shoreline as there was two decades ago when he first volunteered.

"It's cleaner and there's not as much garbage picked up. People are getting the word that this is a pristine area and needs to be protected."

He adds, though, that volunteer numbers have dropped.

"They are not as numerous as they used to be. But Boy Scout groups often come, and they are a very good source of volunteers for our cleanup."

The lake and river cleanup is also the start of this year's Great Arkansas Cleanup, which runs through Oct. 31 and is organized by Keep Arkansas Beautiful, a division of the Arkansas Department of Parks and Tourism.

Mark Camp is the executive director.

"It all started with Greers Ferry Lake," he says.

During the 2018 Great Arkansas Cleanup, more than 5,000 volunteers worked almost 26,000 hours in communities across the state, according to the Keep Arkansas Beautiful website. They collected 76,887 pounds of litter from roadways, lakes, rivers, parks and public areas.

"We have over 50 cleanups registered with us so far for this year," Camp says. See keeparkansasbeautiful.com for information on events or to register.

"It's like, where are all these tires coming from?" They will eventually be recycled, he says.

Cleanup groups in counties across the state coordinate with local waste management services to collect trash gathered by volunteers. They pick up a lot of cigarette butts.

"It's the No. 1 item of litter here and in the world," Camp says. "That filter that looks like cotton is actually plastic, and it doesn't bio-degrade. It's full of all the toxins nobody wants to inhale. When it rains it all goes into the waterways."

While it's good to see Arkansans come together to give the state a scrubbing, Camp says the ultimate goal is to stop litter.

"We have a beautiful state and a lot of people who volunteer their time, but we have to keep the trash from getting there in the first place."