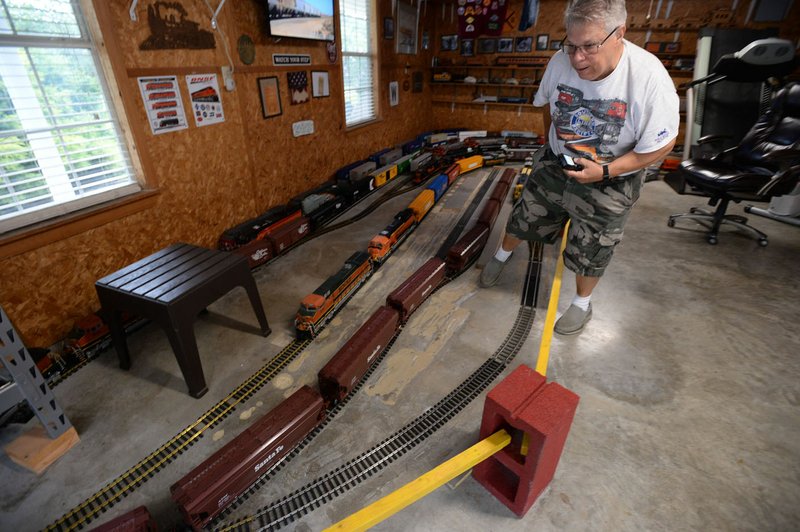 The second you pull up to the Heather Ridge Railroad in Greenland, something uncontrollable happens to your face: It breaks into a wide, delighted smile before you even realize it. Collector Monte Scott has created, in his residential front yard, a tiny, self-contained world that includes small towns, farms, hills, valleys, bridges and, of course, a railway system that snakes in and out and up and down and all around what Scott has built.

"You know, most people, no matter what job they have, have stress in their life, to some extent," says Scott, when asked what inspired him to build the imaginative world in his front yard. "I was in the legal industry, so I had a lot of stress, and I thought, 'You know, I need a way to escape from that.' So I could have a rough day at work or out on the road, wherever I was, and come home and go out to into the railroad area and just escape from everyone. It's my own little world: There is no crime, there's nobody causing problems. If I didn't like something, I could change it. I can do anything I want out here within reason. And so I escaped into this."

There are nearly 700 feet of tracks involved in the Heather Ridge Railroad Co., including the tracks that make their way into Scott's back yard. You could visit 10 times and see something new each time: The bride dragging the groom to the quaint little church house, a gurgling pond that is home to nearly a dozen (real) koi fish and two frolicking (toy) polar bears, a small gathering of tepees populated with Native Americans. The project is ongoing, and Scott says he adds things frequently. He first developed a taste for world building when he and his wife, Virginia, while living in California, started collecting miniature houses, villages and people created by the company Department 56.

"And so we got really deep in Department 56," he says with a chuckle. "Our living room in California was about 21 by 20 [feet], and we turned it completely into a winter wonderland. I started looking for a train for the village. I drove to the hobby store, and they had a magazine in the rack that read 'Garden Railways.' And it had a picture on the cover of a train running around a pond with a waterfall in the yard. And I thought, 'Huh, I should do that -- I have a pond, I have a waterfall. That is intriguing. I'm going to get this magazine.'"

He also got a train for his Department 56 village, and he and Virginia continued to build on that project until they had become a beloved holiday stop for hundreds of people in their small town. But even as he continued to build that world, the call of this second, outdoor fantasyland sounded in his ears. 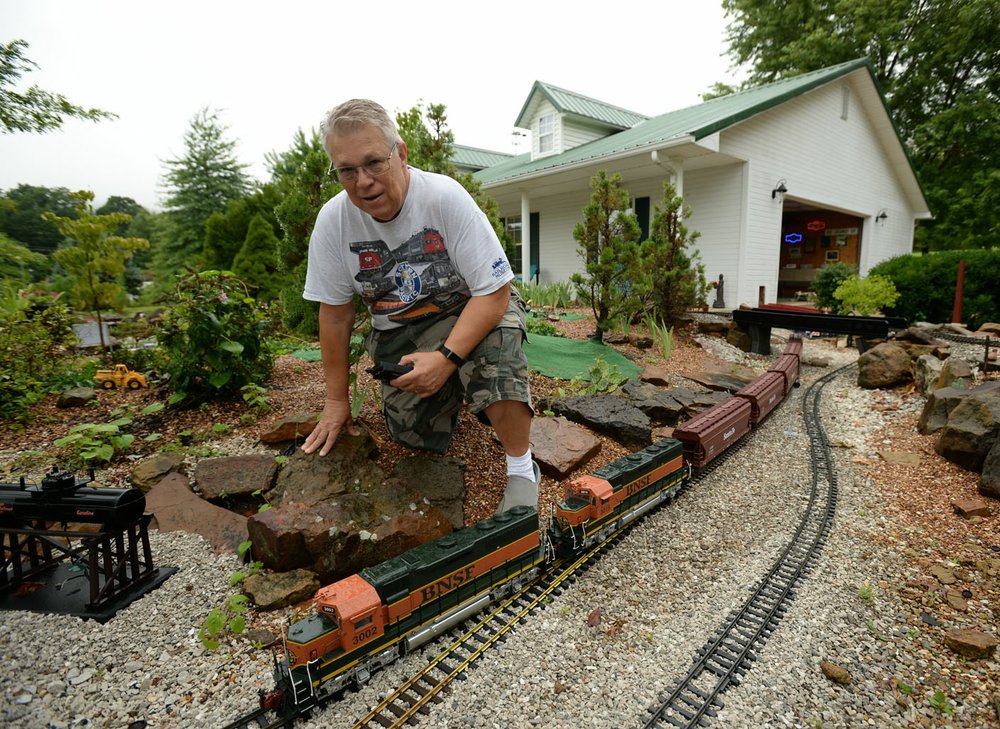 NWA Democrat-Gazette/ANDY SHUPE "I could have a rough day at work or out on the road, wherever I was, and come home and go out into the railroad area and just escape from everyone," says Monte Smith of his creation, Heather Ridge Railroad. "It's my own little world: There is no crime, there's nobody causing problems. If I didn't like something, I could change it. I can do anything I want out here within reason. And so I escaped into this."

"I told my wife, 'I'm going to put a train out here and pull up our grass,'" he says, and that's just what he did. He was so motivated by this dream that he jumped in, feet first. He brought in truckloads of stones and rocks of all types and sizes, along with flowers and bushes and small trees. His vision extended to the back yard, then to an adjoining property that his father owned. As attached as he became to his new creation, when he found out his grandchildren -- who lived across the street in California -- were moving to Arkansas, where several of his kids and grandkids already lived, he didn't hesitate to follow. But he brought his trains with him, and when he and Virginia settled in a lovely white house in Greenland, Scott quickly started plans to make a home for his collection.

"Originally, the train was going to be out back, and I had seven dump truck loads of dirt brought in," he says. "I had put up railroad ties to give it a square shape and hold the dirt back. I had lived here before but never owned property, never really tried to landscape or anything. So that was in 2003, and it was like this year -- it was a very rainy year. I had a guy come in with a box blade and level it off for me, and it started raining. And it rained, and it rained, and it rained. And, one day, I looked out, and it was just like a cloud burst. That dirt went like this -- up over the railroad ties [then] down. It just ran into a muddy mess, all the way down out into the road. And I told my wife, 'Look, there goes another $100.'"

He was stymied: The landscape of the back yard was clearly not conducive to his plans. His stepson suggested he relocate the tracks to the front yard, which had much more even ground. When his wife agreed to let him rip up yet another front yard, he realized that she had grown to trust his vision on the project. 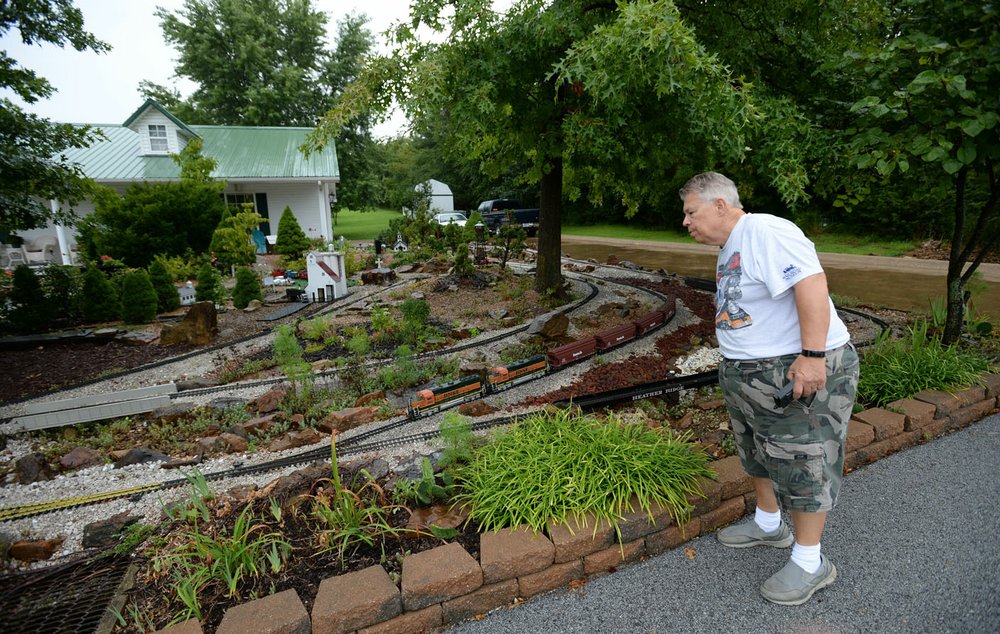 NWA Democrat-Gazette/ANDY SHUPE "I love my railroad," says Scott. "I just want to share it." Schedule a visit to Heather Ridge Railroad by contacting Scott via phone or through his Facebook page.

"She knew I could see things that she couldn't see," he says. "I could sit here and look at that area over there and say, 'I can do something there, put a little something over here.' I said, 'Look, I'll just take one-half of the lawn.' And that's what I did, I stayed over here. I re-designed this several times. Originally, when we started out, all I had was track around the perimeter, the sidewalk and the road out here, and the train did a loop. Of course, that wasn't enough."

With his wife's blessing, he soon built his pond and waterfall. It all takes more planning and design than you might imagine, and wrestling with the outside elements can be difficult, as well. The waterfall, for example, has been in three different places in the yard before landing where it is today, feeding the small pond with its burbling stream. That was the only way Scott was able to foil a mysterious rodent that chewed through the waterfall's tubing on multiple occasions. Landscaping is another trial-and-error endeavor. Scott has been unable to replicate the success he had with roses in California and has spent the years planting, growing, moving and re-planting a variety of shrubbery, perennials and small trees that populate his world. Tracks are laid and re-arranged until Scott finds the most pleasing placement. And Scott puts not only his artistic skill into his creation, but he also puts in his heart.

"Everything is named after a family member," he says. "The 'C and M Canning Co.' down there is actually a restaurant, and my dad and mother are actually Carl and Mabel, so 'C and M'. That tea shop is named 'Hailey's Tea Shop' -- my granddaughter, Hailey, works for Savoy Tea Shop on the [Fayetteville] square." Some of these signs he's ordered off of the Internet but others, he's painstakingly lettered in miniature himself. He's hand-built other things, too, like the startlingly realistic trestle bridges that he welded together and had powder-coated in bright red and aqua.

Though Scott says he will continue to tweak the buildings, vehicles and people featured in the vignettes around the front yard, he's pretty much stopped buying new trains. He says at last count there were nearly 100 rail cars, 12 passenger cars and a whole host of engines and cabooses. They're all stored in his "train room" -- his garage -- where there's a small door cut out to allow the trains to drive in and out. 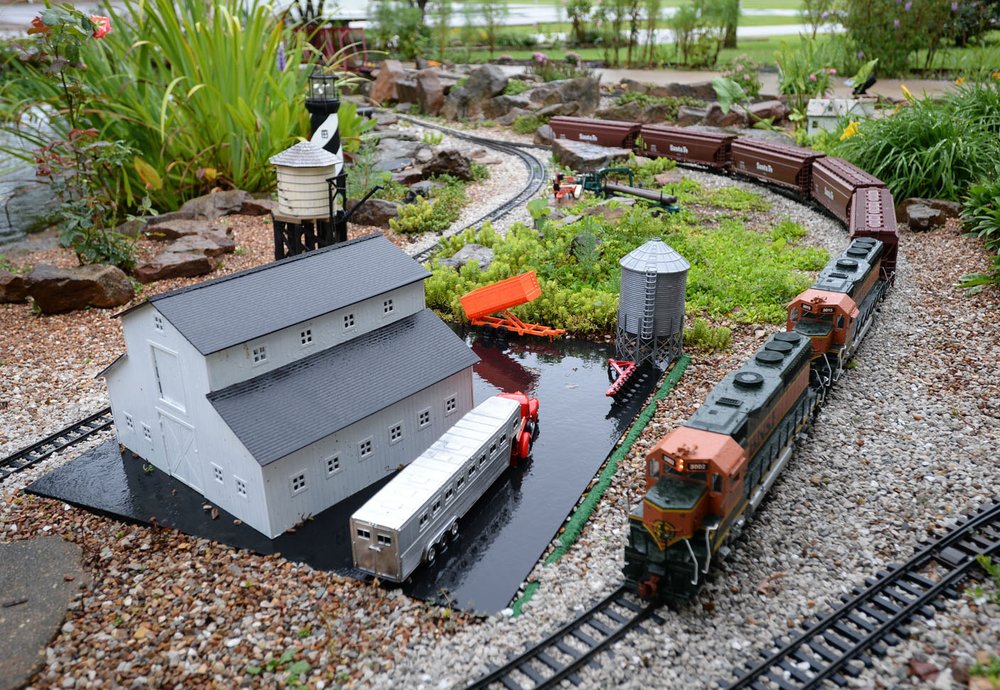 NWA Democrat-Gazette/ANDY SHUPE Lakes, businesses and towns in Heather Ridge are all named after Scott's family members and friends, lending an intensely personal feel to the project.

"This is my escape," he says of the garage, where he can play a continuous loop of videos of trains moving through gorgeous scenery. He's semi-retired, and, in addition to the hours he puts into the railroad, he's working on a book detailing his life. It covers what he learned in his career and how his life changed when he moved from California to Northwest Arkansas. He has his own YouTube channel, where he uploads videos of the railroad in action. He and his wife started a nonprofit and have been active in helping to stock local food pantries. One of his biggest delights, though, is giving tours, mostly on Saturday and Sundays, to folks who want to come out and see Heather Ridge Railroad in person.

"It's been a very good move from California to here," he says. "I'm glad we're here. I think this where God wanted us. I love my railroad. I just want to share it."

Monte Scott is happy to share his creation with others — but make an appointment first!

See his videos on Youtube under the name trainman707.

Print Headline: All aboard for magic ride