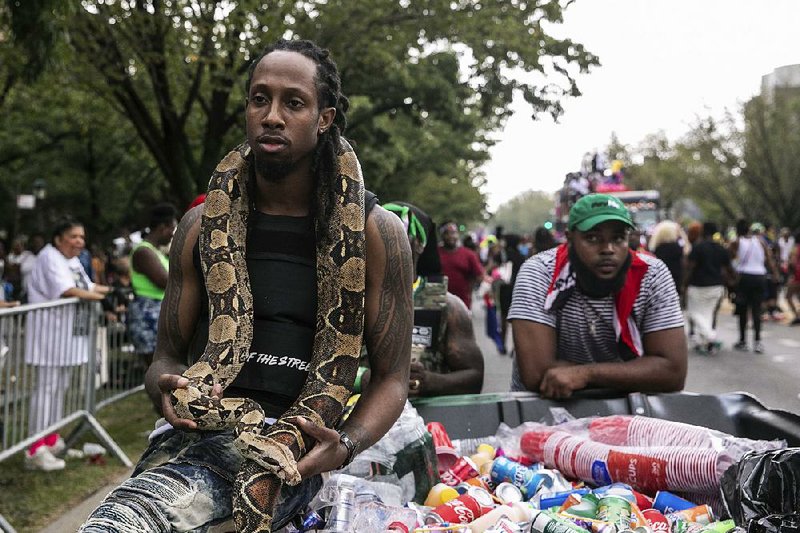 A man with a snake participates Monday in the West Indian American Day Parade in the Brooklyn borough of New York.

NEW YORK -- A masked gunman was killed in a shootout with police who confronted him on a Brooklyn street and pursued him into a backyard early Monday, police said.

The shootout unleashed dozens of rounds in a yard in the Brownsville neighborhood, police Chief of Department Terence Monahan said. No officers were injured.

The New York Police Department hasn't released the identity of the man, who was shot numerous times in the body, Monahan told reporters at a news conference.

The encounter began when three uniformed officers on patrol in an unmarked car spotted a man in a mask around Howard and Dumont avenues about 2:30 a.m.

As one officer got out of the car and the others drove around a corner, the man pulled a gun and fired on the car, leaving a bullet hole in the passenger-side front door, Monahan said. He said the officer on foot fired back, but the man got away.

About a half-hour later, a resident told police that someone was trying to break into a home on Howard Avenue. Uniformed officers entered the yard of the home and were met with gunfire and responded, getting pinned down for a time before backup arrived, Monahan said.

In all, seven officers fired about 65 rounds, the chief said, adding that police were still counting shell casings fired by the gunman. He was taken to a hospital, where he was pronounced dead.

Police said they found a semi-automatic handgun in the yard, and they have video of the confrontation.

NASHVILLE, Tenn. -- Seven groups that conduct voter registration drives are asking a federal judge to stop a new Tennessee law that threatens them with fines and criminal prosecution for failing to comply with a slew of regulations.

The motion for a preliminary injunction was filed on Friday in U.S. District Court in Nashville. It claims the law "undermines democratic principles."

Plaintiffs include the League of Women Voters of Tennessee, the American Muslim Advisory Council, the Mid-South Peace and Justice Center, Rock the Vote, the Memphis Central Labor Council and HeadCount.

The new law requires organizations holding voter registration drives to register with the state and ensure that every person participating in the drive completes training by the state's Coordinator of Elections. It also imposes fines on groups turning in 100 or more incomplete applications within one year.

Several other organizations filed a similar motion in federal court two weeks ago. In both cases, the plaintiffs want U.S. District Judge Aleta Trauger to stop the law from going into effect in October by putting it on hold until their lawsuits challenging the constitutionality of the new law can be decided.

Republican Secretary of State Tre Hargett has said that adding penalties will bolster election security. And, in pushing for the bill, his office pointed to 10,000 registrations submitted in and around Memphis last year by the Tennessee Black Voter Project on the last day for registering, noting that many were filled out incorrectly.

HONOLULU -- A dozen doctors have lost their positions after a Honolulu hospital switched to a new employment contractor, officials said.

The Queen's Medical Center physicians belonged to Medical Specialists of Hawaii, which has held a contract with the hospital to care for surgical patients for the past decade, The Honolulu Star-Advertiser reported Sunday.

The hospital has hired Envision Healthcare Corporation of Nashville, Tenn., one of the nation's largest physician-staffing companies, which is owned by private equity firm KKR & Co. Inc.

Patient care and physician coverage are not expected to be impacted by the change, said Rick Bruno, hospital vice president for patient care.

The 12 physicians are all hospitalists, a category of doctors who care for patients only while they are in the hospital. They retain hospital privileges, but are no longer paid or contracted to care for patients there. The doctors were offered positions with Envision, but none accepted, officials said.

SAND SPRINGS, Okla.-- Authorities said a suspect is dead after an officer-involved shooting in northeastern Oklahoma.

Sand Springs Police Chief Mike Carter said shots were fired at the end of a pursuit involving a Sand Springs officer and Desjarlais. Carter said the officer was pinned against his vehicle during the incident and was transported to a local hospital for treatment and observation. The Bureau of Investigation said that Desjarlais was pronounced dead at the scene.

The officer, who has been placed on administrative leave, wasn't immediately identified. 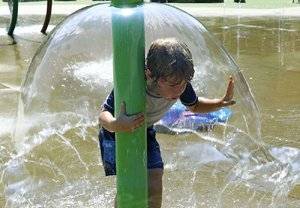