Coach Hud Jackson isn't placing too much importance on any preseason poll, but being selected to finish fifth in the 12-team Great American Conference is something different for the University of Arkansas-Monticello football program.

"It's probably the highest we've been picked, " said Jackson, whose Boll Weevils posted their first winning conference record (6-5) in the coach's nine years in Monticello last season. "But to be honest with you, it doesn't really mean much.

NOTEWORTHY The Boll Weevils were picked in the coaches’ poll to finish fifth in the Great American Conference. … Seven returning starters on offense and Seven on defense. … Jackson posted his first six-victory season and first winning regular season since taking over in 2011. … Boll Weevils won five of their final six GAC games after starting the season 1-4. … Caleb Canady, a redshirt sophomore from Morrilton, takes over for three-year starter Cole Sears, the second-most prolific quarterback to play at UAM. Sears finished his career ranking No. 2 to Scott Buisson on UAM’s all-time record list in total offense (9,736 yards), passing (8,857, 71 TDs), rushing (837, 22 TDs) and total touchdowns (93). … Last year’s leading rusher Amani Riley (102-441) is gone, but the Boll Weevils had 7 different runners total 1,773 yards and 3 of them return. The top five receivers from last season return — Washington, Parham, Hampton, Sly Augustyn and Ralph Singleton — and they combined to catch 138 passes for 2,112 yards and 16 TDs. … The defense is anchored by safeties Christian Jefferson and Marshaud Melancon, DE Brandon Young and linebacker Gabe Brace. LB Deontae Haynes is back after missing last season with injury, and Jackson is hoping for contributions from two Missouri Southern transfers — Akel Beard and Justin Legier. … Senior Josh Marini kicked the game-winning field goal as time expired in a 20-17 victory over Southern Arkansas, and was 11 of 14 on the season.

UAM won five of its final six GAC games to post a 6-5 regular-season record and tie for fourth in the standings.

The late run, highlighted by a last-second 20-17 victory over archrival Southern Arkansas University, also earned the Boll Weevils a spot in the Dec. 1 Corsicana Bowl, where they lost 30-22 to Emporia State.

That final loss wiped out what would have been Jackson's first winning season in Monticello, and things didn't get any better when fifth-year offensive coordinator Kyle Shipp moved to Arkansas Tech University, where he was named offensive coordinator and then elevated to head coach when Bo Atterbury departed suddenly in early March.

"Didn't miss a beat," said Jackson, who had to replace Shipp and four other members of last season's staff. "UAM going to be just fine."

"Very, very detailed guy," Jackson said of Lusby. "He takes a lot of time with his position. It was going to take that to happen to develop what he wants in his quarterbacks."

Jackson said the coaches aren't asking Canady, a redshirt sophomore from Morrilton, to be Sears, who finished his UAM career second to Scott Buisson in total offense, passing yards and touchdowns for which he was responsible.

"Obviously, when you lose a Cole Sears, that's a big loss for us," Jackson said. "He did so many great things for us. But we're not asking our quarterbacks to be the next Cole Sears. We're not asking them to win football games. We're asking them to manage it, to get the ball into the hands of the guys who can make plays for us. If Caleb does that, he'll be successful."

The reason Jackson can afford a game manager at quarterback is a stocked shelf of returning receivers and running backs.

So do the likes of Parham, Hampton, Augustyn and Singleton.

"It's always going to be a battle in our conference," Jackson said. "I understand that we're probably going to be the underdog in every game we play, and that's OK. That's who we are and what we've sort of built here." 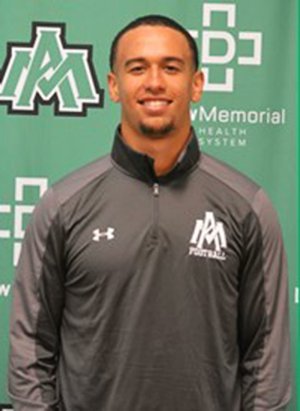 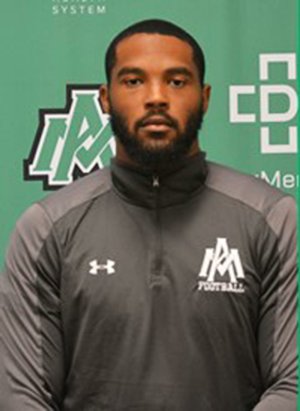