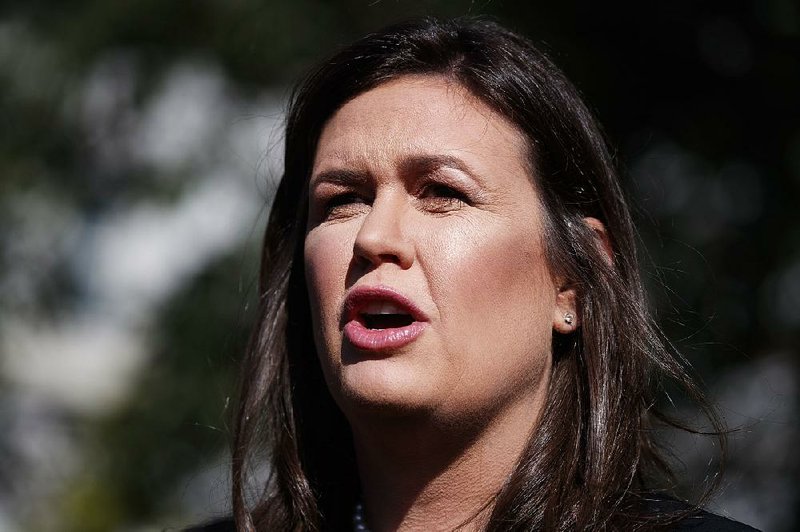 WASHINGTON -- The mastermind behind the newly launched Draft Sarah Huckabee Sanders for Arkansas Political Action Committee lives in West Virginia, has never stepped foot in the Natural State, doesn't know the Huckabee family and oversees a string of other PACs, he told the Arkansas Democrat-Gazette.

Several of his other PACs aim to legalize marijuana.

Regardless of whether Sanders runs for governor, Patrick Krason -- the new PAC's treasurer and custodian of records -- stands to benefit financially.

He typically receives between "10 to 12% of net funds raised," although the figure drops as the revenue rises, he said.

Sanders, who recently signed on as a Fox News contributor, declined to comment on the new group, the 2022 race or her views on marijuana legalization.

The committee has not been authorized by Sanders, according to paperwork filed by Krason. Nor does it have any ties to Sanders' father, former Arkansas Gov. Mike Huckabee.

Friends of the former White House press secretary and potential gubernatorial candidate are cautioning potential donors to be careful.

"Smart people don't give money to these kinds of people because they don't know anything about them. They don't know who they are, where they come from ... and they don't know where the money goes," said Jonathan Barnett, the state's Republican National Committeeman and a former state representative from Siloam Springs.

[NEWSLETTER: Sign up for the Arkansas politics email at arkansasonline.com/emails]

Former state Rep. Prissy Hickerson, R-Texarkana, a longtime friend of the Huckabees, said she can't vouch for the new PAC or its leader.

"This is the first I've heard of it," she said. "I believe if there was any legitimate effort to raise money for Sarah Huckabee, I think that I would know about it."

In an interview Friday, Krason said his PAC is trustworthy. He promised that donors will be able to see how their money has been spent.

Reports of receipts and disbursements will be filed, as required, with the Federal Election Commission, he noted.

"I'm a firm believer in transparency," he said.

He and his wife, Crystal, have served as treasurers for at least two dozen PACs in recent years, according to Federal Election Commission filings, including the Cannabis Catalyst PAC, Citizens for the Legalization of Cannabis PAC, Legalize Now PAC and Full Repeal PAC.

Many of them never raise or spend a single penny, Federal Election Commission reports show. Others fare better.

It's hard, Krason said, to top the interest generated by the Draft Sarah Huckabee Sanders for Arkansas PAC.

On June 13, President Donald Trump announced that Sanders would be leaving the White House and returning to Arkansas. In addition to offering effusive praise, he also urged his spokeswoman to follow in her father's footsteps and run for governor.

"She is a very special person with extraordinary talents, who has done an incredible job!" Trump said in a tweet that day. "I hope she decides to run for Governor of Arkansas -- she would be fantastic."

That same day, someone snapped up the domain name DraftSarahForArkansas.com.

"Please help financially support our outreach work so we can let Sarah know Arkansas and America are behind her 100%!" the webpage states. "Please note, US Individuals and Green Card Holders and [sic] well as US Businesses may donate unlimited amounts to the Draft Sarah Huckabee Sanders For Arkansas PAC. Please be generous and donate now!"

"She has a backbone. She stands up for herself; she stood up for the president. She did the job she was there to do," he said. "She left the White House with the president's blessing."

Although the PAC uses the word "Arkansas" to raise money, it has few ties to the state.

Only one of its board members listed on the website lives in the Natural State.

After forming the PAC and reserving the domain name, Krason focused on finding an Arkansan to lead the group, turning to social media for help.

"Who do I know in Arkansas?" he posted on his Facebook page Aug. 1.

Someone suggested Sabine Durden, an anti-illegal-immigration activist from Mineral Springs. She wasn't willing to take the post but recommended a fellow Howard County resident, Jarrad Shelton, who shares her enthusiasm for Trump and Sanders.

The Nashville father of two, a political neophyte, said he'd be happy to serve as chairman.

In a memo dated Tuesday, he urged people to join the cause, saying Sanders "possesses the strength, dignity, and grace under pressure that is missing from so many leaders today. ... Working together, we can show Sarah that the Governor's Residence is where we need her to be."

In an interview, Durden portrayed Shelton as a good choice to lead the PAC.

"He's a great patriot," she said. "I have a feeling that he would dig in his heels and learn everything he needs to and do it right. I have trust in him."

Shelton, who has never run for office or volunteered on a campaign, said he's convinced that Sanders would make a great governor.

"She's not going to be bullied. She will fight for what's best for Arkansas," he said.

Asked about the PAC's finances, Shelton said he isn't sure whether he'll be compensated for his work.

"That will come at a later date, whether we're paid or not; I don't really care," he said. "I just want Sarah Huckabee Sanders to be governor, and I'm here to do whatever I can."

Since its launch, the pro-Sanders PAC has collected less than $10,000, Krason said, but he predicted that figure would rise, noting the heavy publicity it is receiving.

Politico, The Hill, Newsweek, Salon and Newsmax.com are among the outlets that have written about it.

The paperwork for the pro-Sanders PAC originally listed an address affiliated with a "virtual office" in downtown Washington, D.C. In exchange for a monthly fee, the outfit promises to provide customers with "a prestigious business address, mail handling and forwarding," a receptionist and a "local or toll free phone number."

On Thursday, the address for the committee was changed to Arkansas. The amended statement of organization listed Shelton as the PAC's chairman and designated agent.

In his new role, Shelton will "direct overall PAC strategy," serve as spokesman and focus on fundraising, the PAC's website states.

Greg Wool of New Jersey will oversee the PAC's fundraising strategy and execution.

Suzzanne Monk of Washington, D.C., will focus, in part, on social media and messaging.

Much of the work will be done from Charleston, W.Va., where Krason resides.

He said he also travels frequently to Washington, roughly 350 miles to the east.

His driving has been complicated, recently, by legal troubles.

In May, Krason was convicted in absentia of driving on a suspended or revoked license and of failing to appear in court, according to Virginia court records.

"I was living in West Virginia and didn't have the opportunity to make it back for the court cases at the time," he told the newspaper.

He was fined and is in the process of paying what he owes, he added.