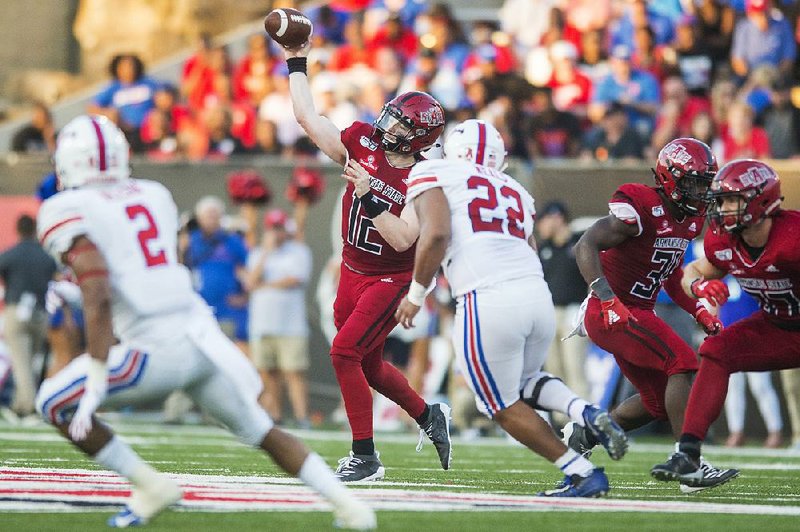 Arkansas State quarterback Logan Bonner (left) was 32-of-50 passing for 324 yards, 4 touchdowns and an interception in Saturday’s 37-30 loss to SMU at Centennial Bank Stadium in Jonesboro. - Photo by Jeff Gammons

Duggan, ASU's first-year defensive coordinator, had watched SMU pester his unit for most of the night in his system's debut.

And there's plenty to evaluate after the Red Wolves (0-1) watched a winnable game at Centennial Bank Stadium dissipate into a 37-30 defeat to the Mustangs.

ASU has plenty to correct before it heads to Las Vegas to face UNLV on Saturday night, beginning on Duggan's side of the ball. Despite forcing an interception on the first series of the game and a safety in the second quarter, ASU's defense looked out of sorts for much of the night and struggled against SMU's up-tempo attack.

The Red Wolves surrendered 360 passing yards and another 148 on the ground. The secondary struggled to contain and tackle SMU's dynamic receivers.

"We did a horrible job with our sense of urgency, lining up and doing our assignments," said senior nickel back Darreon Jackson who came away with the early interception. "It's something that we needed to fix. ... Lot of things that happened tonight, it was a lot of self-inflicted issues."

ASU also committed 11 penalties for 83 yards, was 3 of 13 on third down, turned the ball over three times -- including a costly third-quarter fumble near midfield on a punt return by normally sure-handed senior safety B.J. Edmonds, which led to an SMU touchdown -- and allowed a back-breaking 98-yard touchdown on a kickoff return right after the Red Wolves had taken a 23-16 lead with 7:36 to play in the third quarter.

Offensively, junior Logan Bonner didn't look like a quarterback making the first start of his college career, and he demonstrated he may have learned a thing or two sitting behind Justice Hansen the past three years. Bonner showed off a big arm, looked comfortable in the pocket, was able to scramble when needed and nearly led a game-tying drive in the final 2 1/2 minutes.

"I was impressed by Logan, his control, his command, his field presence," Duggan said. "We were in this football game all the way till the very end because of Logan Bonner's fight, and when the players see how hard he fought, I mean, he's rising to that leadership role. They believe in him right now, and I believe in him."

Bonner finished the night 32-of-50 passing for 324 yards, 4 touchdowns and an interception, which was a bit fluky as the ball inexplicably slipped out of his hand while he tried to throw over the middle midway through the second quarter and wound up behind him in a SMU defensive lineman's hands.

But Bonner's misfires on a few deep balls -- especially one to a wide-open Brandon Bowling on the first play of the second quarter that could have produced an easy touchdown and 14-3 lead for ASU at the time -- and his sack-fumble on the last play of the game when ASU needed one last throw to the end zone weighed heavily on Bonner's mind afterward.

"I thought I had a lot of good plays," Bonner said. "They were playing a funky defense. We worked on it all week, and I thought I went with the ball in the right spots. I can't be missing those deep balls. Those are game-changers. I can't take a sack on the last play. I got to get it in the end zone somehow, so that's on me. I got to go hit the drawing board for sure."

Bonner may have found himself a go-to weapon, though, in senior wide receiver Omar Bayless, who caught all four of the touchdown passes, tying the school's single-game record.

"From the spring up to fall camp, we always stay after practice, get extra passes in, always just working," said Bayless, who finished with 10 catches for 132 yards. "[Bonner] got his chance tonight to show what he can do, and being a receiver, I just always want to make him right, wherever the ball [is] at, wherever he puts it at."

This all happened despite ASU playing most of the game without its top two receivers in seniors Dahu Green and Kirk Merritt. Green, who's been dealing with a knee injury since fall camp, was suited up and looked ready to play as he went through pregame warmups, but he was ultimately held out.

The Red Wolves suffered a big loss midway through the second quarter when Merritt took a huge hit while going over the middle, knocking him out of the game. Afterward, Duggan said Merritt would be re-evaluated Sunday, and Green remained day-to-day after re-tweaking his knee.

It's still unclear when Coach Blake Anderson would return to the team. Anderson has been on a leave of absence after the death of his wife on Aug. 19. Also, after UNLV, the Red Wolves have a looming matchup at No. 3 Georgia on Sept. 14.

"We got to go back to work and respond next week," Duggan said. "And I know they will, because of the response that we've had the past week and a half." 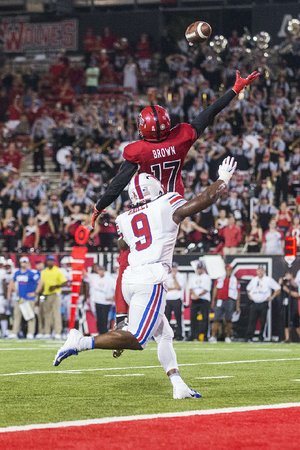