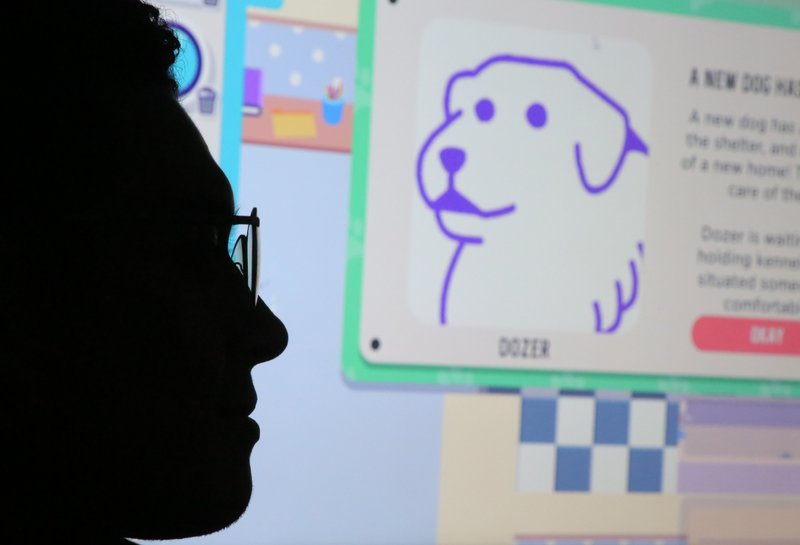 UALR students and instructors made a video game about a pet rescue operation. Robbie Hunt is silhouetted against the game. (Arkansas Democrat-Gazette/JOHN SYKES JR.)

Congratulations! You've taken your dog rescue service from its humble beginnings in your garage to a sparkling new building with plenty of room for lots of fuzzy, four-legged friends looking for homes.

Just think of the joy you will bring to so many dogs and their new owners.

But wait. Bills are piling up, some of the dogs have health problems and money is running short. Can you save the shelter?

This is the world of To the Rescue!, the video game being developed by a Little Rock company that allows players to build their own dog rescue operation.

It's got cute puppies and heart-warming rescues, but it also has all the problems faced by real-life shelters.

And it has already had a bit of success, clobbering its $16,000 goal through the crowd-funding service Kickstarter less than 48 hours after it was announced Aug. 6.

To the Rescue! is a creation of Little Rock Games, a five-person company that emerged from Little Rock Game Designers, a group that meets at Mylo Coffee every other Wednesday to discuss and design video and tabletop games.

Here they are now — Olivia Dunlap, Tanner Marshall, Robbie Hunt, Brad Sims and Joe Williams — in the CRUX lab at the University of Arkansas at Little Rock.

Dunlap and Marshall are UALR graduate students and have been going to school together since fourth grade in Newton County. Sims is an instructional designer for UALR's College of Education and Health Professions. Williams is a professor of rhetoric and writing at the college, and Hunt is a web developer.

They are dog lovers and game lovers, so a simulation game based in an animal shelter is not exactly a stretch.

"Olivia brought it up one day and said that it must be really hard to run a dog shelter," says Marshall as he and the others watch Dunlap play an early version of the game on a big-screen TV. "In the indie gaming scene, there's a pretty big emphasis on experimental kinds of settings. We thought there was definitely something worth exploring."

Being a simulation game, which means it aims to reflect real-world situations, To the Rescue! takes its players through the emotional ups and downs of running an actual rescue shelter.

This is part of the game's description on its Kickstarter page:

"Each day brings new challenges and rewards. Dogs have specific preferences, can get infectious diseases and can have negative traits. But you can also hold fundraisers, get random donations and, if you work hard, help someone find their new best friend. Unfortunately, there's never enough room and always more dogs."

The shelter will also need to expand, and those animals must be fed, watered and cared for.

"Your goal is to get as many dogs adopted as possible and keep the shelter open," Marshall says.

If the shelter gets too full, it won't be able to take care of all the dogs, "and you'll have to make some hard choices," Marshall says.

"That part was really important for us because we wanted to show how difficult it can be to run a shelter," he says. "Part of the idea was to raise awareness" about euthanasia — putting dogs down. 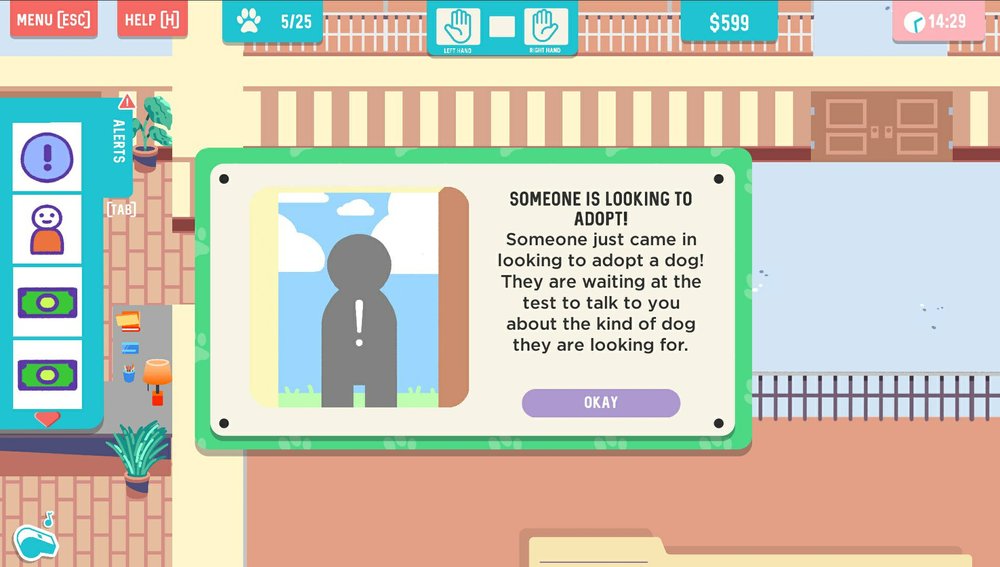 Screenshot from To the Rescue! video game. (Little Rock Games)

Players can use a social media page and other methods in the game to drum up donations and community support for their shelter.

"If you get really lucky and get lots of donations and lots of adoptions, you don't have to [euthanize a dog]," Dunlap says. "This is to show how much shelters rely on donations and how important adoptions are for them to stay open."

Twenty percent of the game's profits from post-Kickstarter sales will be donated to animal shelters.

Variety reports that Americans spent more than $43 billion on video games last year. And about 85 million Americans have pets, according to a 2017-2018 survey by the American Pet Products Association.

"There's a huge crossover between game lovers and dog lovers. They have been super, super supportive with the Kickstarter," Sims says.

"We've been working on it in our spare time, primarily Olivia and I, for about two years," Marshall says. "We launched the Kickstarter to see if it was viable and we've had a great response so far."

No kidding. The fundraising effort, which ends Tuesday, had pulled in $31,149 by presstime on Friday.

That money will "help get us in front of publishers, make more people aware of the game and help us cover development costs," Marshall says.

The group hopes to have To the Rescue! available by next August on Steam, an online video game platform. Retail price will be $15. 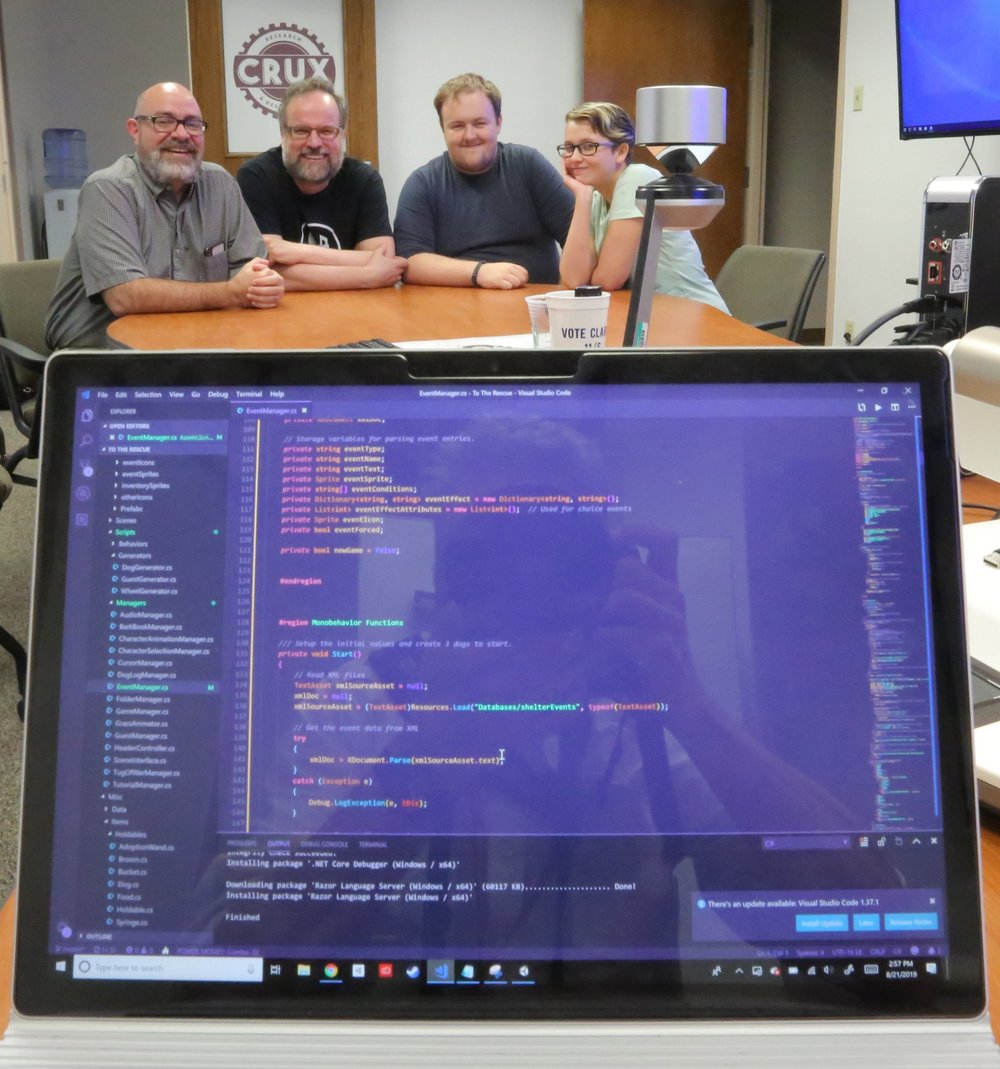 The developers of To the Rescue! are, from left, Brad Sims Joe Williams, Tanner Marshall and Olivia Dunlap, not pictured is their colleague Robbie Hunt. (Arkansas Democrat-Gazette/JOHN SYKES JR.)

This is not Little Rock Games' first rodeo.

Williams is wearing a black T-shirt advertising Galactic Scoundrels, a storytelling, tabletop card game of "space-western mayhem" he and the company developed that hit stores in January.

Williams says the game "is sort of like if you think about famous scoundrels like Han Solo [of Star Wars] and Malcolm Reynolds from Firefly and other characters like that, it gives people the opportunity to be that sort of person for a couple of hours by playing cards, both with and against other players."

Galactic Scoundrels, which also had a successful Kickstarter campaign, was picked up by Mercury Games, a Canadian publishing company, and is available at Walmart, Target, Barnes & Noble, Game Goblins in Little Rock and other retailers.

Beyond the marketplace, Little Rock Games has created games for researchers at the University of Arkansas for Medical Sciences who are looking at using video games as a way of helping children stay away from opioids and for an augmented reality exhibit at the Clinton Presidential Center and Park.

There's also a podcast, A Study in Games, that can be found at littlerockgames.com.

"I think we're just all interested in game design," Hunt says of the company.

Their passion for playing and making games is nurtured in the Little Rock Game Designers group, which has been around since 2014 and has about 20 members.

Feedback and a sense of community are advantages of being part of the bunch, Hunt says.

"It's really hard to be a creative person and work by yourself and not get feedback. Most people who make games, especially in central Arkansas, probably feel like they are the only person doing something like this."

It's fun to see "someone come to the meeting for the first time, or watching one of us saying, 'Hey, I had this crazy idea about this,'" Sims says. "And then watching that build over months and months and even years until you've got a real playable game. When we first started getting together, people came out of the woodwork. We've all had experiences of people who have told us, 'Oh, I designed a game.'"