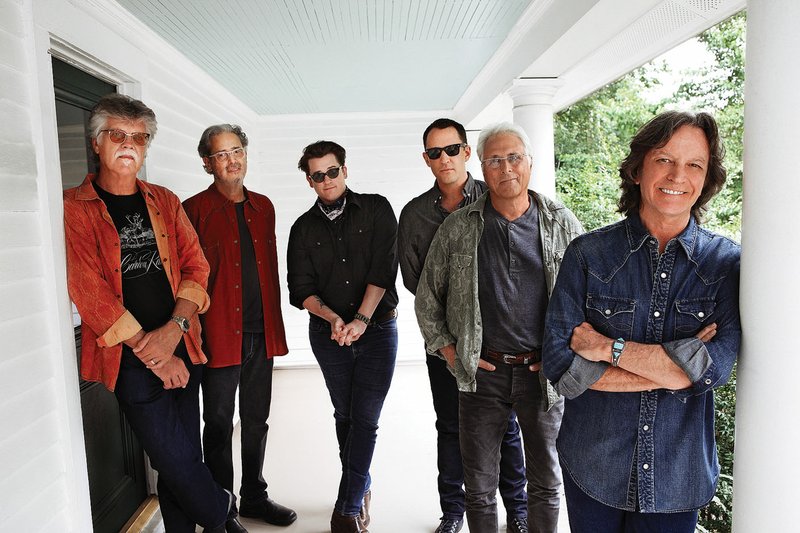 Photo by Glen Rose "It's like when you throw a couple of puppies into a pen with a bunch of old dogs. All of a sudden, the old dogs start playing, you know? That's kind of what's happened with us," says Jeff Hanna, right, one of the founders of the Nitty Gritty Dirt Band.

Nothing about a phone conversation reveals that Jeff Hanna is in his 70s -- nothing but the fact that the Nitty Gritty Dirt Band's first hit happened in 1967. And that his son, Jaime, now playing with the band, is in his mid-40s.

Hanna is still down to earth, friendly and enthusiastic, saying: "We get to do something that is still interesting to us. There are folks out there punching the clock in the musical world. We're so fortunate! It's not lost on us how lucky we are."

He does say that the new younger members -- his son on lead guitar and friend Ross Holmes on fiddle and mandolin -- make touring more fun.

"It's like when you throw a couple of puppies into a pen with a bunch of old dogs," Hanna says, chuckling. "All of a sudden, the old dogs start playing, you know? That's kind of what's happened with us."

Then he adds, still laughing, "But in the afternoon, when they're playing golf? We're getting a nap in."

Hanna, one of the original members of the band, says none of them "got into this for it to be our life's work." He was in his second semester of community college in Long Beach, Calif., thinking he'd someday teach literature, when he started a jug band with Bruce Kunkel.

"I didn't take my finals, because we were playing a gig," he remembers, laughing again. "The guitar became more important than the books. Plan B never existed."

How young was he? Hanna says he'd forgotten that his parents had to co-sign his first record deal, something he ran across recently in some old paperwork. "Buy for Me the Rain" was a top 40 hit -- bigger on the coasts, he says, but often banned in the Midwest because of the B side, "Candy Man."

"Apparently we blasphemed in the song -- even though it was written by the Rev. Gary Davis," he says. The Beatles and the Rolling Stones were having similar issues, "so we were in pretty good company. And when you can hear your song coming out of the radio, driving down Hollywood Boulevard? You think you're pretty cool.

"But we didn't have another hit until 'Mr. Bojangles' in 1970." It was with that popularity that the Nitty Gritty Dirt Band found itself playing 200 shows a year in the 1970s and early 1980s, Hanna says.

"We've been so fortunate that we've always had a fan base -- and those fans have bobbed and weaved with us every time we changed genres."

One thing, he says, has remained constant.

"All the early rock 'n' roll we loved so much -- like Buddy Holly -- is still informing what we do."

After half a century on the road, "there's a certain part of it that becomes routine," Hanna admits. "But the other part of it is when you step on the stage and people are singing your songs back at you -- and it's a rush!

"We're in different seasons now," he continues contemplatively. "There was a time, when we sort of came to the end of the 50th anniversary thing, [retirement] occurred to me. But what would I do? As long as you can physically and emotionally do what you love, why not? Willie Nelson is my hero. There is an old adage about fine wine improving with age, and I see that on stage."

What surprised Hanna when his son joined the Dirt Band was "how good he is." Jaime had gone to Belmont University, a highly regarded liberal arts college in Nashville, Tenn., graduated and gone to work in a restaurant, his father remembers. Then Raul Malo of The Mavericks asked Jaime to play with his band. "He went from cooking chicken to playing in front of 100,000 people in Hyde Park in England," Hanna says proudly. A stint with family friend Jonathan McEuen -- the son of another Nitty Gritty Dirt Band founder, John McEuen -- followed, then over a decade with Gary Allan before Hanna stole Jaime away.

"He's a great musician, and the vibe is really fun," he says. "We have that kind of family harmony going on. It's a DNA thing."